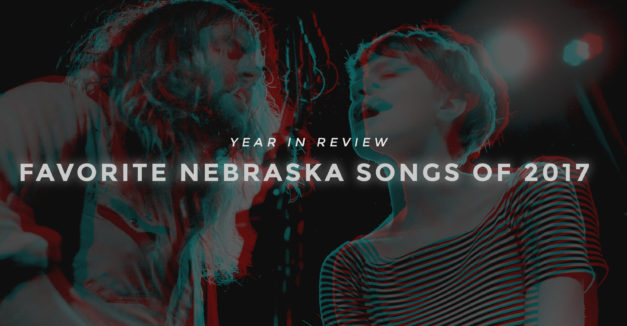 As we do at each year’s end, a horde of scene contributors told us about their favorites in Nebraska music, shows and developments while also looking ahead to 2018. Stay tuned over the next couple of weeks as we share the results.

Today, we run down a list of the songs that got our network moving and grooving in 2017. Read on for more on cuts from Mesonjixx, Hussies, Thick Paint, Enjoli and more.

Hussies released a tape called Nowhere and the first song off the album was called “Red Lights.” My goodness, what a barnburner. Listen to it now.

“My Body” – Mesonjixx. I don’t think we’re gonna hit a point when we don’t need to hear songs like this from women. I’m not a great dancer or an eager one, but I feel so good every time I hear this song I usually end up moving a little bit.

Another gem I’ve enjoyed this year is “Gunpowder” by Brad Hoshaw. Brad is one of the best songwriters I’ve ever heard and this one is a masterclass.

That’s tough, because there were a ton of great Nebraska songs this year. My favorite would probably “700 Degrees” by Uh Oh. I know the studio version just came out, but I’ve heard Uh Oh play a ton of times this year and it always stood out to me. I absolutely love the anthemic chorus of “who’s got time to get down, down, down.” Joe Champion’s vocals are the strongest they’ve ever been on this track and the production slick, playing to the band’s pop sensibilities. “700 Degrees” is everything I liked about the group’s 2016 EP You’re Not Dead turned up to 11. This song will not be leaving my ears for a long time.

“Thinking” by Enjoli. Enjoli is going to be a name that you all will hear more and more in 2018. I think her vocals can take you places you never imagined. She is a true vocal hypnotist.

Hands down, “How Did It Happen” by Thick Paint. Not sure if this song is officially released or not. I’m very excited to hear some more recordings from this group.

I’ve been really into “How Did it Happen” by Thick Paint, but the new single, “Heart of Hearts,” that Anna McClellan dropped recently is also fresh a-f. I guess I just ran into all of them on tour in Phoenix a couple weeks ago…coincidence?!

“Amimal” from Rothsteen. I work with him professionaly, and so have seen this song come to fruition. It’s an intrense and dark soul song, and  unlike anything else being  put out in our scene.

“Cage” by Lodgings. I heard this band for the first time this year actually, and I don’t know why it took so long. Bryce Hotz (vocalist) is incredibly down to earth and it shows in all of his projects, but this is by far my favorite. Honestly, the whole album kicks ass.

“Conspiracy Theories” by The Way Out

“Fuck Your Wall” by The Boner Killerz is one of the most Boner Killerz songs they have. In their video feature, they described themselves as more of an experience than a genre, and this is what they mean. Hearing that song at a show means it’s time to get angry, get excited about it, and do something.  The Boner Killerz are a national treasure.

“Widow” by Evan Bartels & the Stoney Lonesomes. A couple others, “A Robin’s Heart” by Wendy Jane Bantam, “Immortal for Now,” Lloyd McCarter & the Honky Tonk Revival.

I’ll have to go with the title track from David Nance’s newest LP Negative Boogie. First of all, the song is just a total banger. It kicks off with this static drum beat and guitar scratching, which end up giving way to ringing chords and Nance proclaiming “Well, there’s no use for rock ‘n’ roll, it died for the digital age.” Then, BAM, Nance comes in with easily the most invigorating hook I’ve heard this year, demanding that his devotees do the negative boogie while he observes. The song’s spunky, full of energy and an emphatic battle cry for us to get our collective shit together. I think that’s just what we needed this year.

“Dark Matter Woman” by Super Moon. Probably didn’t come out in 2017 [Editor’s note: it did not!] but it’s been my favorite song all year.

“Hasn’t Failed Me Yet” by The Lupines — it’s a gorgeous slow rocker with big vocals and big guitar. What more do you want?

“Club Kidz” by Universe Contest from Get Cot Livin. Have you listened to it? I mean, how can you not rock out, convulse, and swoon all at the same time. I was privileged to get a sneak peak of Get Cot Livin’ this spring, and by the time it was released in October, I still was playing the hell out of this track. This is the first time I felt like the production of their recordings reflect their live show. From Timmy’s un-declaring blood curdling vocals and shredding guitar, and Jordan pretty much rollin’ around in the sheets with the drums, to Jordan Ellis ripping on the viola, it’s a repeat for sure. I can’t even tell you how many headbanging at my work desk sessions I’ve had this year to this song, ha. Also, standing desks rule for the day job folks out there who like to rock out. 10 out of 10 will listen to again and again, until Tim Carr tells me to knock it off.