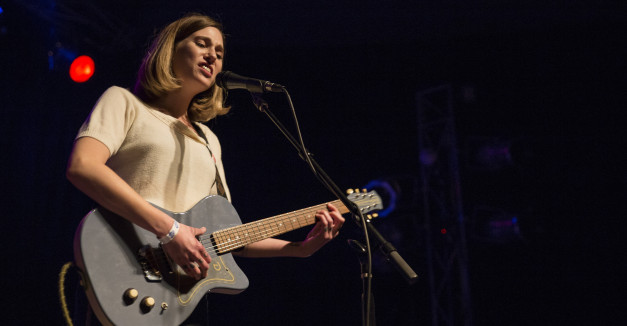 It’s easy to say Miniature Horse, the solo project, of Rachel Tomlinson Dick has punk elements. The guitar tone is unmistakably spikey at times, as when a pedal effect launches nearly a different instrument at the listener. Even more, Miniature Horse is a solitary and quieter journey through some of the same themes of insecurity, anger, feminism and reclamation that you find in the music of her punk trio, Manic Pixie Dream Girls.

But probably the thing about it more wholly, unimpeachably punk is an undulation of perspectives in the songwriting. From riot grrrl bands to Fugazi to Against Me!, there’s a captivating balance of the outright “you can’t do that to me” and the impressionistic vocalization of “you did this to me.”

At its end — after a harrowing song about sexual assault and another which vitriolically satirizes the theft of agency for women artists — Miniature Horse’s debut December album Timid Wind offers a third avenue of perspective. Something like a sliver of light shining through a crack in a dark room’s wall. As the album trickles into songs like “Moving” and “North Wind,” there’s the appearance of a voice proper, something earned from the tumult of the others. And here, Tomlinson Dick’s lyricism meditates on parents and upbringing and arriving at a place where you can the past for what it was.

Through all this, Tomlinson Dick’s place as a top flight guitarist is elevated all the further. The perfectly intoned and pressurized licks of her Portland based band Hers live alone in the Miniature Horse project, the force capable of thematically nurturing or undermining her words.

Timid Wind is capable of lyrical and musical intimacy, as well as some intricate lo-fi malice, and you can currently get it via Fantastic Cassettes’ Bandcamp page.

Tomlinson Dick plays this Thursday for the Sheldon Spring Performance series and then next Thursday, April 30 for Oquoa’s third residency show at O’Leaver’s.

But right now, listeners, we’ve very happy to be joined live on the air. With the song “Birth” here is Miniature Horse: