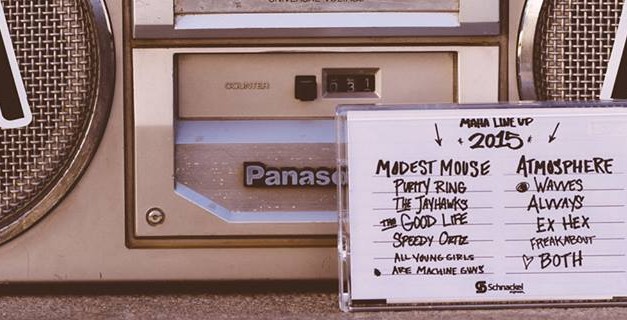 It was a significant weekend for festival lineups in Nebraska with both Maha and Nebraska Folk & Roots announcing this weekend.

Maha Music Festival announced the 12-band lineup for their sixth year Sunday at O’Leaver’s in Omaha.They said it was the best lineup yet, and they didn’t disappoint, snagging a couple hip hop acts, high-energy punk outfits and buzzed-about indie pop bands.

The headliner, Modest Mouse, released its long-awaited sixth album, Strangers to Ourselves, earlier this year and was the most requested band for the festival, according to Maha’s Facebook. Maha will be just one of several festivals on Modest Mouse’s summer schedule, including Sasquatch in May and a handful of European festivals.

Tim Kasher’s side project, The Good Life, reunited in 2014 and announced a new album set for release this summer. The other locals, Freakabout, All Young Girls Are Machine Guns and Both, will round out the hometown festival. Starting the festival with the rapidly-rising popularity of Both may draw crowds early in the afternoon. This mirrors the early-day placement of hip-hop acts M34n Str33t and Purveyors of the Conscious Sound in 2014 and 2013.

Atmosphere is a Minneapolis-based hip-hop duo that has been releasing albums since 1997. The act is affiliated with the Rhymesayers label and shares roots with Doomtree, who played Maha last year. This set will be for the diehards or the folks who can’t make it Atmosphere’s May 16 show at Slowdown.

O’Leaver’s opened up their newly-constructed patio area for the estimated 850 people who RSVP’d to the announcement party via Facebook. M34N STR33T’s Haunted Gauntlet and production company The New BLK created the lineup announcement video that played as more than 100 onlookers readied their phones to tweet the lineup. 2014 Maha performers M34N STR33T later played to the packed bar.

For the fun of it, we had two of our current interns, Kelly Langin and JP Davis, make hybrid prediction/wish lists for Maha before Sunday’s announcement. Check out how their picks and hopes compared:

Nebraska Folk & Roots Festival announced the first part of its lineup with a party at The Bourbon on Friday and performances by Jack Hotel, Lloyd McCarter and the Honky Tonk Revival, Bud Heavy and the High Lifes and Brad Hoshaw and the Seven Deadlies.

Passes are available June 22 for the July 31 and August 1 festival. Here’s the full lineup:

This is apparently about half of the festival’s lineup and further additions will mostly include touring bands, according to co-organizer Jeremy Buckley. All in all, it’s a solid lineup so far. Perhaps the biggest surprise is the lineup’s slight veer away from folk with the addition of soul acts All Young Girls Are Machine Guns and Mesonjixx and the dream pop of Eros and the Eschaton.

In terms of Record Store Day releases, You Be Me for a While is perhaps one of the most exciting for Nebraska music fans.

As we wrote last week in a feature interview with Chris Farren (of the band Fake Problems), Farren and Tim Kasher teamed up for a split seven-inch on which both songwriters wrote and recorded one song. Then, they traded chords and lyrics and recorded their own versions of each other’s songs.

It’s a classic Kasher story song centered on a tragically realistic protagonist, narrated by a more crooning Kasher than usual.

UNL art student and Sheldon student advisory board member Phoebe Little booked the shows, and had this to say about the series:

“The main goal of the Spring Performance Series is to give local artists an opportunity to create within the context of the museum, to transform it from a space that is often only for looking to a space for collaboration and interaction.”

Little says performances will take place in the museum’s sculpture garden, the great hall and the auditorium. See the lineup below: 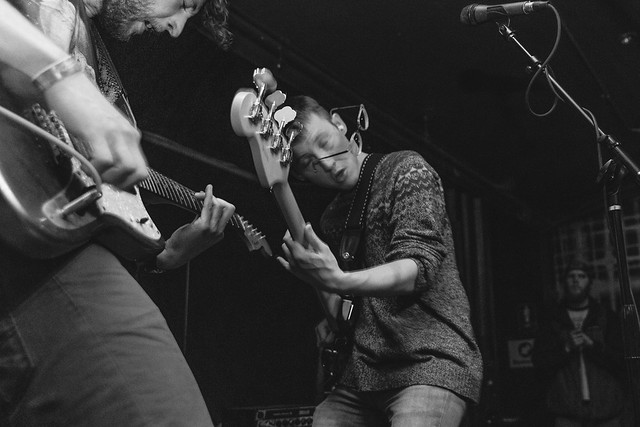 photo of Bogusman by JP Davis

Jacoby
I Forgot to Love My Father
Mesonjixx
Churls

Monday means we turn over our weekly HN Radio playlist, streamable at the top of any page on HearNebraksa.org.

This week’s playlist kicks off with the new Icky Blossoms single “Living In Fiction,” which we wrote about on the site last week. We also received some specific submissions to the playlist this week from Nebraska artists newly on our radar.

First, there’s “Hennessy Louis V” from the Omaha emcee Rarri Vuitton. His EP Wavy John Chaney came out at the beginning of last month. Check out a video here.

Then, we’re featuring the song “Here and Now” by Norfolk’s Tucker Hill Citizen’s Brigade. That’s the title track from their forthcoming physical album. More on it here.

And, then we’re rolling with a pair of songs from the twangy Omaha country band Clarence Tilton, which has its album release show Friday, April 18 at Reverb Lounge. RSVP here. The self-titled album was recorded at Powerbase Studio near Wisner, Nebraska.

Stream this whole playlist through next Monday, and you’re likely to catch some of it on our KZUM radio show tonight. That’s HNFM from 8 to 10 p.m. on 89.3 KZUM in Lincoln or kzum.org worldwide.