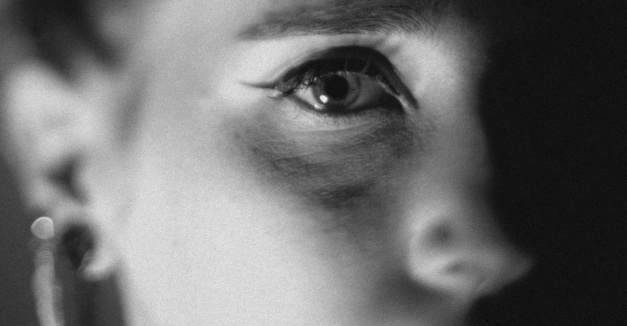 There is a certain irreplaceable, musical beauty in the intricate way Rachel Tomlinson Dick has carved her niche on Timid Wind. As her solo project Miniature Horse, she does it with sharp social commentary and instrumentation.

Released Dec. 5 on the Lincoln tape label Fantastic Cassettes, Timid Wind feels solitary, with Tomlinson Dick (also of Manic Pixie Dream Girls and HERS) singing both lead and backup vocals bolstered by layered guitars. Her bold, rich voice blends equally well with velvety clean guitar tone and occasional grimy distortion. One can visualize the fingers on her left hand crawl spider-like across the frets, her right hand deftly picking at strings or hammering at power chords.

And sure, anyone can stand with a guitar, play some chords, and sing. But to copy this in such an exact way, at once vulnerable and impenetrable, delicate and aggressive, would be an incredible feat. You can plug a Fender Stratocaster into a Marshall stack, for instance, but good luck emulating the tone of John Frusciante.

There is plenty that stands out about Tomlinson Dick’s work in that same way, from its unapologetic message to the core of its intensely individualistic ethos. But at its heart, Miniature Horse has a stripped down, punk rock aesthetic. There’s assertion, attitude, grungy power chords and bouncy, fist-pumping choruses. The voices on the album address the tumult of emotions brought on by enforced gender roles, of equality in art, and of self-reliance.

Take the spunky, head-bobbing centerpiece of the album, “Good Art,” in which Tomlinson Dick addresses attitudes toward women in music with searing wit. She pulls fuzzed out chords and interspersed hammer-ons through the neck pickup and distorts them.  “Do I make a good piece of art?” she asks almost tauntingly in play on the cruder phrasing that might come in the form of a cat-call. Must she be judged as an artist with the “female” qualifier? Is she simply there to “make you hard”? The artist in the song would likely argue that her art is art regardless of who made it, asserting at the end – doubly so, in harmonizing with herself — that she isn’t open to the world for objectification.

These ideas abound throughout the album. “Sister” deals with another social setting. It begins manically with sliding notes and lead licks. Though the listener gets just one side of this exchange, one can imagine how it plays out: guy tries pickup line, and when shut down, thinks there might be some conditional reason for her doing so, a boyfriend or whatever. At drop-kick high-speed, the voice splits no hairs in proclaiming that she’d rather be left alone, not because she “belongs” to another or for any other reason than she has made her decision. It’s not up to the antagonist.

For all of the volume and aggression, Timid Wind is as musically deep as the subject matter. The title itself alludes to a deeply vulnerable feeling. In the all-hands-on-deck style of Manic Pixie Dream Girls, in which she sings and plays bass, it’s conveyed loudly through a punk rock lens. As Miniature Horse, she employs little subtleties like the trilled lead notes on “Forest” that place tiny flourishes on the thunderous landscape her guitar work creates. At their dirtiest, as in “Good Art,” the guitars could have been recorded underwater.

Tomlinson Dick also makes great use of the negative space inherent in recording with only a guitar and vocals. The dexterous finger picking on opening track “Hunger” fills the entire space and sets the tone for her to dive in, singing “fuck off fill it up fill it up/fuck off, what I want is what I want.” Her echoing solo at the end serves as an indicator of the complex work throughout the album. Yet, “Moving,” the album’s longest and most tender track, sets the listener adrift on the soothing dynamic of thick clean tone, white noise, and the space around her that could be the black night surrounding a desert campfire.

The closing track, “North Wind,” seems to embody the overarching theme of Timid Wind. While the chaos of reverb and low notes swirls around her, she sings “I am my own north wind/I am my own place to land,/I am my own shore/ I am my own sure thing at day’s end.” It is the lyrical summation of the album, where her voice rises to the forefront to stamp the calm, confident exclamation point on its feeling of autonomy.

Whether arrived at through the introspection and social examination in the songs before, or held dearly from the beginning, its truth is made explicitly clear.