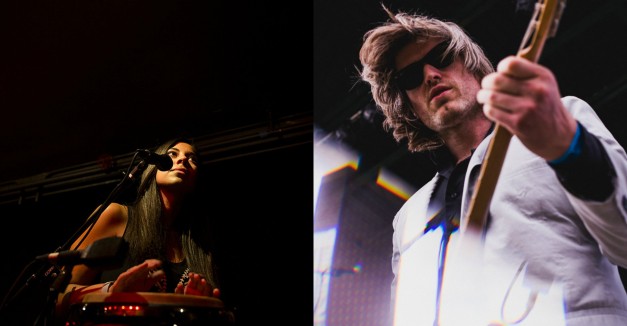 If you haven’t looked at the full lineups for both outdoor, 10-week series, check out Lincoln’s here and Omaha’s here. All gigs start at noon, at 13th and P in Lincoln and 13th and Howard in Omaha. As always, we’re thankful for the Greater Omaha Chamber of Commerce, the Cooper Foundation and the Lincoln Chamber of Commerce for making these series possible.

Each week to preview, we’re going to catch you up on the latest with that week’s acts: something we hope will bring the unfamiliar up to speed and illuminate new developments for longtime fans.

This week, that’s Omaha electric guitar hero and songwriter Matt Whipkey. Whipkey released his latest album, Underwater, back in February. It was a quick and sincere follow-up to his sprawling 2013 concept record, Penny Park, a musical history of a storied Omaha water-park. You’d also know Whipkey from his work with Brad Hoshaw & The Seven Deadlies. See him Thursday at noon, and read our interview below.

On the Lincoln side of things, the funk/groove outfit A Ferocious Jungle Cat opens the Friday series. If your show-going knowledge dates back a few years, you might remember them as More Machine Now Than Man, a staple funk band of Lincoln basement shows. In the last year, the colorful band — which routinely features a stuffed lion head, conga drums, a trombone and the baritone rapping of drummer Cal Harman — has trended toward its treble, with singer Ariel Sinha taking the lead on more songs and adding guitarist Myles Jasnowski (Mesonjixx, I Forgot To Love My Father). We talk to songwriter, singer and bassist Will Harman below.

Hear Nebraska: When you’re in the third minute of a raging, sweaty guitar solo, like we saw at Duffy’s Tavern’s SowerFest for “It Falls Apart,” what are you thinking about, or not thinking about? Where is your head at?

Matt Whipkey: That particular evening, I kind of lost myself in the song. “It Falls Apart” has always been a favorite to perform with Brad [Hoshaw], partly because the solo is based around a repeated figure, then descending into controlled chaos. That particular evening “controlled” went out the window. I always look at Brad to see where he is pushing me and that evening he appeared to give me the “take off” sign, and I kind of lost it literally. I was aware that it was a full room, but in my head it just turned into myself and my guitar. I always try to stay focused on everything in the song, all the instruments the audience. This was a rare occasion where I took on the internal demons with a Telecaster. I hope the public exorcism sounded OK — I know I definitely had to collect myself afterwards. Rock ‘n’ roll is a very powerful thing.

HN: We wanted to touch on something you said in the feature story about Underwater, but it goes back further. What was it like finishing Penny Park, a tightly bound concept record that must have taken a lot of deliberate writing? I’m sure you were happy with it, but did you also feel drained by the process?

MW: Penny will always hold a very special place to me artistically. I had a crazy little concept and then grew it into a full on double LP that somehow works. Creating it was a whirlwind, definitely a record that when I sit down to look at and listen, I ask, “How the hell did I do this?” Everything is so detailed, the lyrics, the package, the instrumental nuances, I just scratch my head.

Underwater was very freeing in a sense that it wasn’t bound by any conceptual constraints. However, Penny is an album I will always be immensely proud of, especially the fact it touches on a theme that holds such a special place to so many people in my own community. While artistically it was satisfying, it took a toll on my personal life. I become very focused when working on an album, a kind of tunnel vision that tunes things completely out. At the time of making Penny a very important relationship in my life was set to the side, and it should not have been. I need to become better at balancing relationships and art; it has always been a challenge.

HN: Would you ever consider another record anchored by a single place or idea?

MW: I love the ides of albums being thematic. While Underwater on the surface is not a concept in the sense of Penny Park, all of the songs came from a very specific place. I could see in the future working on an album that is based on a very specific fictitious narrative. As soon as I can see something vaguely resembling an end product artistically, I am off the races. It is very enjoyable writing in a historical sense, in which you can create characters based on actual events and locations.

HN:  You traveled to Sidney, Nebraska for a show earlier this year. How was that experience?

MW: Our performance in Sidney back in March could not have been a better experience. They have really put a lot of work into making The Arts Center a real destination. I found myself feeling very centered by the landscape out there and I think it translated to our performance. The audience was pin-drop quiet for two whole sets! I cannot thank them enough for that kind of welcoming and respect.

MW: 2015 is rocking so hard! We just had one of our coolest experiences ever as a band opening for Dwight Yoakam at the historic Surf Ballroom. I can’t really put into words that feeling. The summer has a fairly full schedule that will see us traveling more throughout the region. I am pretty excited for the artistic future; it feels the groundwork we have been laying is really starting to come to fruition. It is interesting to, at 34 years old, feel such a very fresh realistic sense of optimism.

Hear Nebraska: How, to your ears, has the sonic complexion of the band changed with departures and additions the last year or so? To our ears, having Myles Jasnowski’s guitar-work out front is a significant change.

Will Harman: Man, what can I say about Myles? He’s a straight-up genius. His abilities are so distinctive, even when he’s being subtle sonically, it has a great impact on the overall vibe. For More Machine and the kitten stage of Jungle Cat, Tyler [Wilson, bass] was the foundation upon which everything was built. When he left, trying to replace or replicate him didn’t feel right, so we decided to demolish and basically start anew.

I had been trying to play with Myles for some time, so it was a no-brainer for me to move to bass. I’m definitely still learning, but it feels much more comfortable for me to be part of the rhythm now. I was never much of a guitar player and I’ll always be a drummer at heart. Because of that, I didn’t spent much time worrying about the melody side of things, for which Myles has an innate ability.

But what never changed, and what Myles instinctively understood, was the purpose: to get people moving. Mike, Ian and Ariel have never sounded better and everyone is contributing, and I’m just so proud. I’m like the overenthusiastic soccer mom and they make fun of me for it, but I got goosebumps the other day in practice because it sounded so good. And then I promptly messed it up.

I was never sure how to describe More Machine to people. Smooth but unpolished, slightly above average dance/funk/soul/hip-hop. Jungle Cat has become something I like to call Nebraskan Thunder Funk (trademark pending). Sometimes it rumbles softly and sometimes it rattles the walls, but it will always be polite.

HN: Branding, humor, reference-wise, is there any part of you that still misses More Machine Now Than Man? (Even as we write this, we see Mike [Masin] wearing a Wookie jacket in the “Dance” video.)

WH: I do miss Lord Vader. If you go back and look at the last tweets of @MoreMachine there’s an exchange between Vader and the Jungle Cat I felt summed up the transition perfectly (something for which I’m obviously still proud of myself.) And even though that was a hard universe to let go of initially, thankfully there are unending cat jokes to be made. Multiply that by the universal appeal of cat-themed Star Wars references and you get an infinite supply of material. So even though we’ve relocated to the jungle, we’ve brought along a great many things from the galaxy far, far away. We also decided that Big Mike pretty much belongs in that Wookie robe, he looks so good.

HN: What’s the best Ian Fleming joke the band has ever made? We remember “Man With The Golden Bone” once from a stage introduction. Might be hard to top that.

WH: The “golden bone” never really got old for the juvenile in me, but Deeep C would roll his eyes every time. It’s funny because I don’t think I’ve ever seen Ian express a great interest in the author’s work with whom he shares a name. But the best joke ever made about Ian’s name would pale in comparison to the best pun ever crafted by the man himself. He is like a pun-assassin, striking when you least expect it.

I’m working on something new for Ian, and I recently re-learned that his middle name is Robert, so I’m thinking Ianardo Roberto Flemente. Stage anonymity with a little flair, with no concern for brevity. But I’m always open to suggestions. 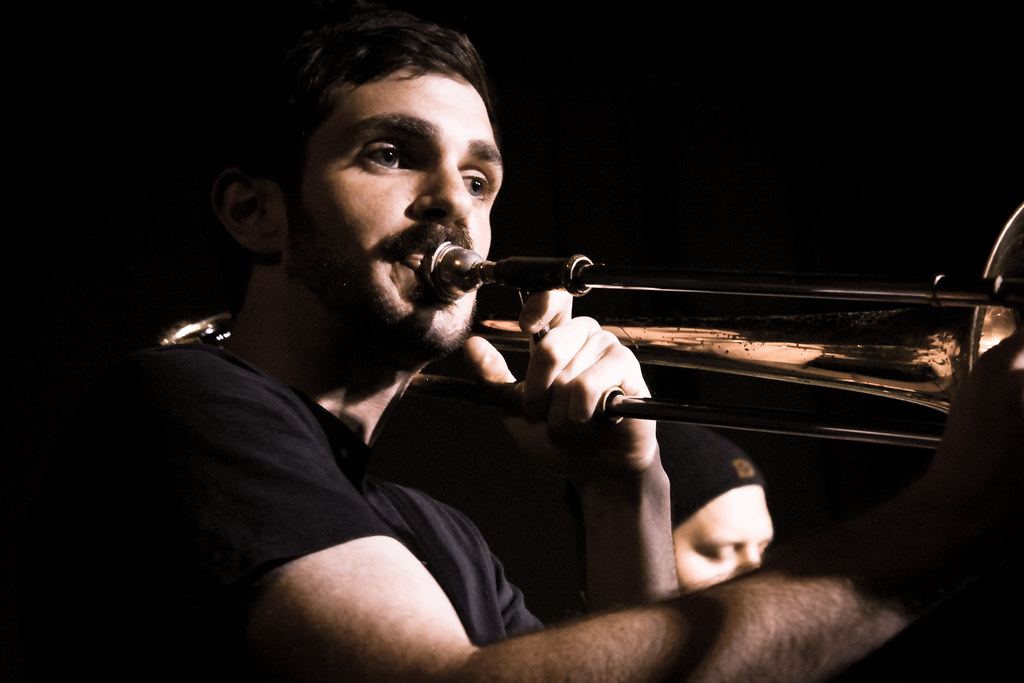 HN: If Deeep C [a.k.a. Cal Harman] were reincarnated as any other emcee, past or present, who would it be and why?

WH: The obvious answer would be Chali 2na from the venerable Jurassic 5 due to the similarities in timbre. But that’s too easy. Speaking for him, I think he would answer either Aaron Carter, Shaq/Kazaam, or Will Smith’s hardcore, profane but somewhat lazy alter ego, Bill Smith.

If I had my way, though, he would be Bo$$, a rapper from Detroit who had one killer album called “Born Gangstaz” in 1993. Her character was a façade, but her voice over those beats is just so nasty.

WH: Deeep C is going solo as soon as the check from the record label clears. Myles just released the feel-good jam of the summer called “Pretty Colors.” Ariel is doing a one-woman Broadway production of the Lord of the Rings trilogy in which she plays all 7000 characters sarcastically. Ian just landed a global publisher for his critically acclaimed self-help novel Learning to Love Your Bare Legs, and Big Mike is currently occupying the number one spot on the 2015 list of best selling VHS workout tapes with his latest hit.

“Dance Like Everyone Is Watching.” I’m spending my summer babysitting an actual cat who may or may not be smarter than me.

In all cereal-ness though, we’ve got a catload of shows this summer that we are really excited about with some awesome bands like Galactic on June 3rd at the Slowdown and Evolfo June 4th at the Zoo Bar – the full list is at aferociousjunglecat.com. We’ve got our first full-length album in the works that should be out early in the fall, plus a couple new videos to get out this summer, some shirts and other things hopefully soon, and a few other ideas growing in the dense underbrush of the jungle. In the nearest future, though, one can always rely on a jungle cat to get down.