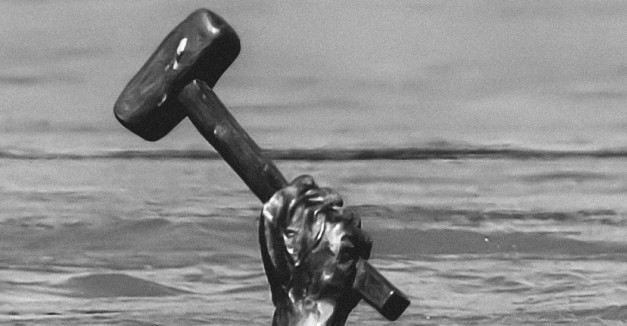 A fist stiffens above the rippling water, gripping a mallet, as the rest of its body is submerged. The grayscale album art for Matt Whipkey’s Underwater features Omaha’s “Monument to Labor” statue as it appears to fight to stay above the surface.

While brainstorming ideas for Underwater’s album art, Omaha singer-songwriter Whipkey says his memory snapped to this powerful image he saw in the Omaha World-Herald during the Missouri River flood in 2011. The newspaper granted him the rights to use the photo for the album.

Whipkey thinks it’s a photograph that “talks,” speaking volumes about overwhelmed feelings in his own life. Moments within Underwater ring with victories of keeping his head up and breathing despite crippling circumstances.

Whipkey says he went through a drought of songwriting inspiration in 2013, but an outpouring of ideas in the beginning of 2014 reinstated his confidence and turned into Underwater. It’s apparent in lyrics like, “It only took a box of wine to really want to die” from the song “1:59” that Whipkey transformed darker feelings of helplessness into an upbeat rock album.

“You’re going out a lot, being quite social and kind of feeling a little bit hazy,” Whipkey describes the album’s source material.

Matt Whipkey and his band will play a record release show for Underwater Friday at the Waiting Room Lounge in Omaha. John Klemmensen and the Party and Kait Berreckman Band will open. Whipkey raised more than $5,000 in a Kickstarter campaign to release the album on an icy, clear vinyl and used the campaign as an album presale for donors.

“I wasn’t planning on making a record,” Whipkey says. “This collection just kind of came about. It felt really cohesive to put them all together.”

Whipkey wasn’t writing regularly after finishing Penny Park: Omaha, NE: Summer 1989, which he says sapped a lot of creative energy from him. Then, in early 2014, he wrote all the songs for Underwater in a three-month period.

Penny Park, his previous double album released in 2013, played out as a “historical fiction” based on Peony Park, a water park in Omaha that closed in 1994. Whipkey says he hopes he created the fictional characters to make the experience in the songs authentic, though they were not based around real people in his life.

Whipkey calls Underwater a nonfiction piece, overflowing with personal experience and “direct writing.” Specific names of characters are sprinkled throughout the album rather than leaving them anonymous.

These characters are either central people in his life or near-strangers that sparked his interest. The title track features several characters Whipkey hardly knew. He sings of meeting a Maryclare and a Hunter, their stories woven between images of teeth grinding and drowning.

“These songs are not necessarily about the male-female dynamic,” Whipkey says. “They explore lots of facets of relationships.”

“Gary Flanagan” for instance is about Whipkey’s friend who passed away a couple of years ago. Whipkey says the song “wrote itself” on the anniversary of his death last year. Upbeat tempo and bright guitar riffs juxtapose the lyricist’s “morose” words.

The sunny rock ‘n’ roll tune “Let Me Bleed” follows this example, with images of jumping off a ledge, disappointing family and friends and feeling like a failure. Whipkey says the lyrics are based on feelings nearly everyone has at some point. He says he sees no point in shying away from acknowledging hopelessness, like when he sings “never turn around to see every sorry circumstance. It didn’t make a sound when I hit the ground after jumping off the ledge.”

Backed by a somber acoustic guitar, “Calendar Smile” is about a woman Whipkey was close to and says was traveling around the country last winter. Whipkey was inspired by the feelings of being “stuck here” in Omaha. He recorded the guitars and sent them to his friend, Scott Gaeta, which jumpstarted the production of the album.

“I said, ‘Feel free to play something on this,’” Whipkey says. “I liked what he did, so we did a few songs that way.”

Half the songs are just him and Gaeta while the other half are recorded with his band. Whipkey says he wanted the album to sound as natural as possible, fleshing out feel-good melodies with classic rock guitar riffs and shrill mandolin sounds, instead of the synthesizers and drum machines that appeared on the busier Penny Park.

Underwater represents a quick, accidental period in Whipkey’s life. He wrote down memories of often-mysterious characters, mixing their quotes and contributions with his own, three-month emotional valley.

“I wanted that snapshot purely for selfish reasons, for myself,” Whipkey says. “I was pleased that something came to me in a sort of inspired way. I wanted to get it down and get it out.”