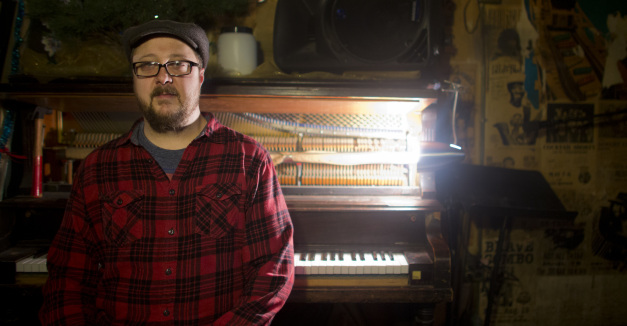 You could make a sound argument — and we did here — that no Nebraska artist had a bigger 2014 than Josh Hoyer.

He released a pair of highly regarded albums, the second even more ambitious than the locally beloved first. The Shadowboxers left town more than a half-dozen times for both extended and mini-tours. And three separate times, for the two album releases and the capstone of ZooFest, a Hoyer show was the arts event in Lincoln. If you put any stock in semi-objective “Artist of the Year” credentials, those would be them.

But what’s taken a visible (but certainly not personal) backseat to Hoyer the bigger-than-life bandleader is that he’s founded a Lincoln reputation on decades of playing and performing frequently without much fanfare, without it feeling too precious. Grind it out. Write constantly. Play anywhere people will listen. That’s what live music is about.

That sentiment flourishes in this Sonata Session. It’s in the hammer holding up the piano lid. It’s in the dark Zoo Bar that the artist seems to cherish as much in solitude as when it’s packed full on Friday night. It’s in the feeling that “The First One,” from November’s Living By The Minute, exists as a ballad fit for a house party where someone asks Hoyer to pop to the piano and play something off-the-cuff.

On that note, Josh Hoyer and the Shadowboxers close our their busy 2014 with a New Year’s Eve show at Zoo Bar. RSVP here. And you can buy Living By The Minute here.

For more on Hoyer and his recent work, look below: