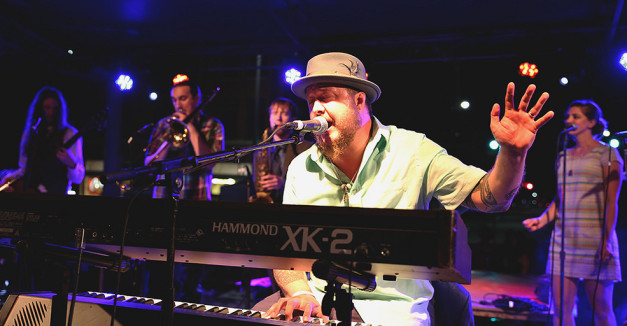 Any given night in Lincoln, there’s music on 14th Street.

If the weather allows, and if the AC is friendly, the Zoo Bar leaves its front door wide open, an uncommon practice. If it’s a good night, you can hear just enough of a show to make up your mind to walk in. The Zoo Bar has a way of reeling you in like a moth to its pink neon lights.

For two days each year, 14th Street is the Zoo Bar. For two days, blues and rock ‘n’ roll can be heard from St. Mary’s to Raising Cane’s, and standing room is a block deep. ZooFest is an annual celebration of Lincoln’s oldest music venue, which turned 41 last week. The blues bar brings out their heaviest-hitting acts, local favorites and top-shelf touring groups.

Missouri’s  The Bel Airs and Chicago’s Lil Ed & The Blues Imperials, no strangers to the Zoo Bar bandstand, were more than happy to make the trip to share the Zoo’s largest stage, alongside local acts, the Killigans, newcomers Oketo (formerly Jeazlepleats). And Josh Hoyer and the Shadowboxers shut down the festival Saturday night in the headlining slot. 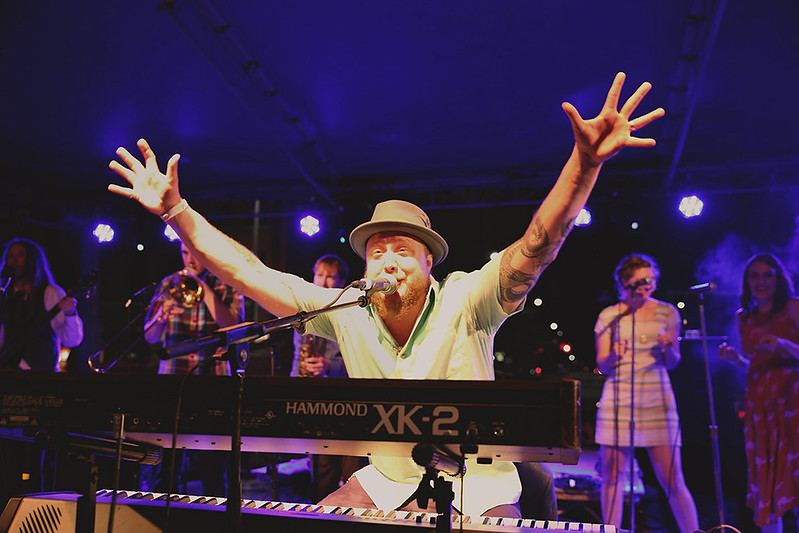 This year’s ZooFest seemed to particularly honor the venue’s blues roots, with soulful set-after-set of moaning electric guitar and raspy harmonica. Rod Piazza, a decorated blues man, put his mouth organ to good use, ripping into solos and riffs thick and smoky as the Famous Dave’s aromas wafted in from the alley between Gomez Art Supply and Sebastian’s Table. He closed the band’s set a cappella, playing his way downstage, through the crowd, and atop a chair in the middle of the street, feeding off the energy of those blues fans around him who seemed to be waiting for this very moment.

Piazza’s meat-and-potatoes blues performance followed a rather unconventional showing from the Grammy-winning Texas-based Brave Combo, who proved to be as comfortable on tight blues as they did on a polka, the band’s calling card. Jeffery Barnes’ bouncy clarinet and flute paired well with frontman Carl Finch’s quirky synths and humorous, zany persona. They were both strange and fun, but their excellent musicianship proved they took their polka seriously. Finch still managed to lead the band off the beaten path; he somehow wandered into a jam of Wham’s “Last Christmas” in the middle of July. And it was great.

Brave Combo’s wide-ranging set was a definite highlight of the festival; they opened with big band classic “Caravan,” and their biggest songs were the “The Twist,” “The Chicken Dance” (preluded by an epic organ synth overture), and a blues-rock rendition of “The Hokey Pokey,” performed in such aggressive fashion, Finch practically rapped the lyrics like Steven Tyler.

Though it ranged in styles, Brave Combo’s set had one constant: it was fun. The crowd took to that attitude well — people of all ages could be seen twisting and flapping their wings, from the bluesman in a fedora and bowling shirt to the springy seven-year-old girl dancing with her mother. Even the guy in the Black Plague shirt was getting down. With enthusiasm.

All groups at ZooFest ventured stylistically, but whenever a group settled into a slinky blues shuffle, the ZooFest crowd naturally slipped into a groove with them. Case and point: the moment Lil’ Ed began wailing on his slide guitar, the table was set for a Saturday evening of serious blues, soul and rock ‘n’ roll.

The Blues Imperialists took the stage at the peak of what was a hot afternoon. ZooFest patrons waited for the sun to set behind the 14th Street parking garage, gradually claiming more of the dancefloor before the bandstand hid in the garage’s growing shadow. More and more took to the balconies of the garage, offering a great view of the street and stage in cool, private comfort. A man even straddled the ledge, with one leg dangling above Lincoln Jewelry Co., a Coke in hand.

Below, The Imperialists wrapped a lively set that seemed to usher in cooler weather. Wind began billowing during Lil’ Ed’s dynamic solos. Behind the stage, dust started kicking up and blew over the audience, where Lil’ Ed took his guitar to sit on a woman’s lap, mid-solo. When it concluded, so did the breeze. I’d like to think the two were linked. 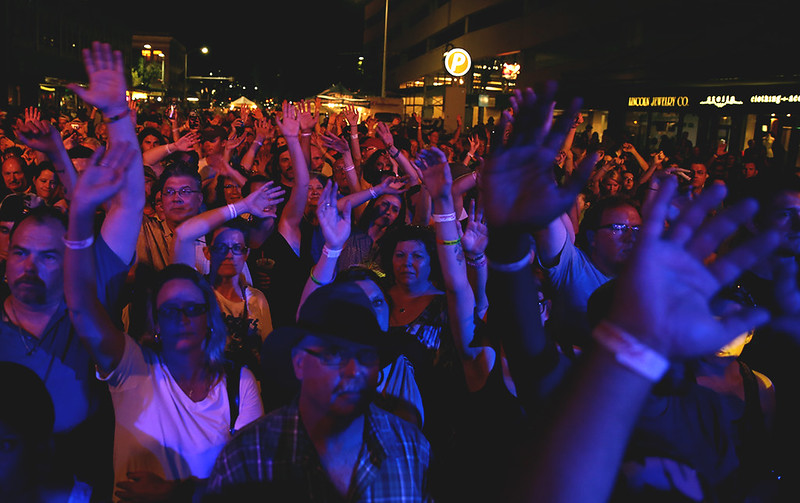 Lil’ Ed turned things over to DJ Relic, the Zoo Bar’s resident DJ, who had been spinning rare soul on wax for the festival. DJ Relic kept the dancing energy from The Imperialists’ set with 45s of The Meters, Otis Redding, Michael Jackson and more.. This got the healthy ZooFest crowd moving, primed for Delbert McClinton, who set off on a blazing set to a crowd packed, standing, all the way to south to ‘O’ Street.

McClinton and company had the tightest set of the festival. They played the hardest and the loudest, but with absolute ease, moving the crowd to a frenzy while maintaining such cool. Halfway through the set, McClinton had a bra in his pocket.

The audience danced from the very first song, which was followed by four more of similar intensity, each hefty servings of blues and rock ‘n’ roll, garnished with fiery solos: Quentin Ware on trumpet, Bob Britt on guitar and Dana Robbins on saxophone. If Saturday’s musicians started a trend of manipulating the elements, McClinton’s band took what was a clear, breezy evening into a cloudy, overcast night. Robbins’ final solo opened the heavens, which cause a bit of a rain scare that could’ve potentially stopped the festival before the biggest show of the night, Josh Hoyer and the Shadowboxers’ set of new material.

Luckily, the rain subsided by the time McClinton played the last of his third in-encore song. Packed all the way to Ali Baba’s, many fans stayed standing waiting for McClinton’s crew to tear down and for Hoyer’s squad to set up. 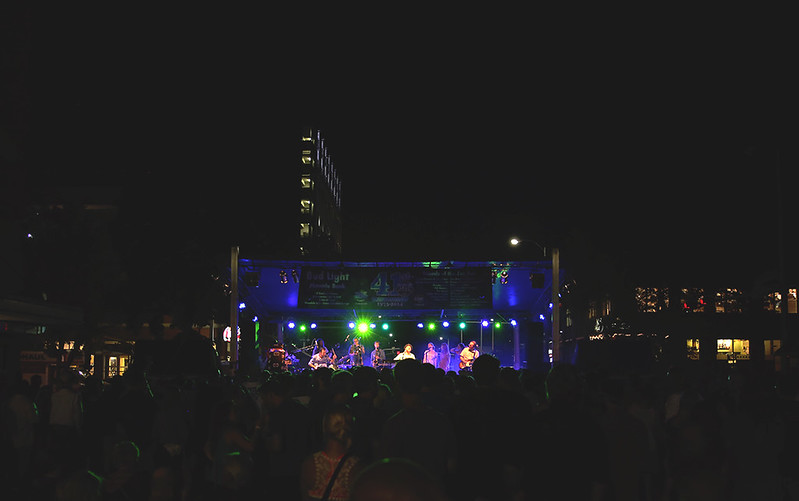 Undoubtedly, a Shadowboxer set of new material was the best way to end the festival, rewarding the Zoo Bar’s most loyal patrons to the newest from the Zoo’s most loyal band. There, Hoyer premiered the catchy groove “Living By The Minute,” growling “Blood and Bone,” where Hoyer stepped from behind the keys to rap to the crowd. He also unveiled the lively and infectious dancing track, “Let It Out,” along with a half dozen new songs Lincoln won’t hear until the Shadowboxers’ next album drops, with good fortune, later this year. It shows Hoyer still writing mean, catchy hooks, but building even deeper R&B (almost hip-hop) grooves and writing nastier horn lines than we’ve heard from him before.

But the exclusive tease didn’t leave the ZooFest crowd wanting more. They called for an encore, but seemed visibly fatigued once the Shadowboxers wrapped their set. It’s as if they suddenly realized how tired they were.

Hoyer was a satisfying end to the festival for the crowd that came in droves, despite the sweltering 90-degree weather, which became more forgiving as the night rolled on. While the Shadowboxers were playing, the weather was cool. Before they finished, the hazy skies cleared. ZooFest ended with Hoyer howling beneath the “supermoon.”

Below, more photos of Hoyer’s headlining set by Shelby Wolfe 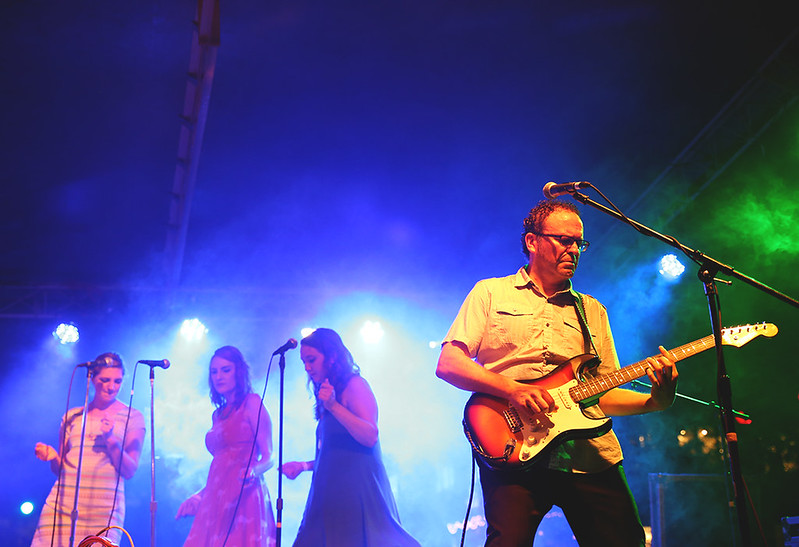 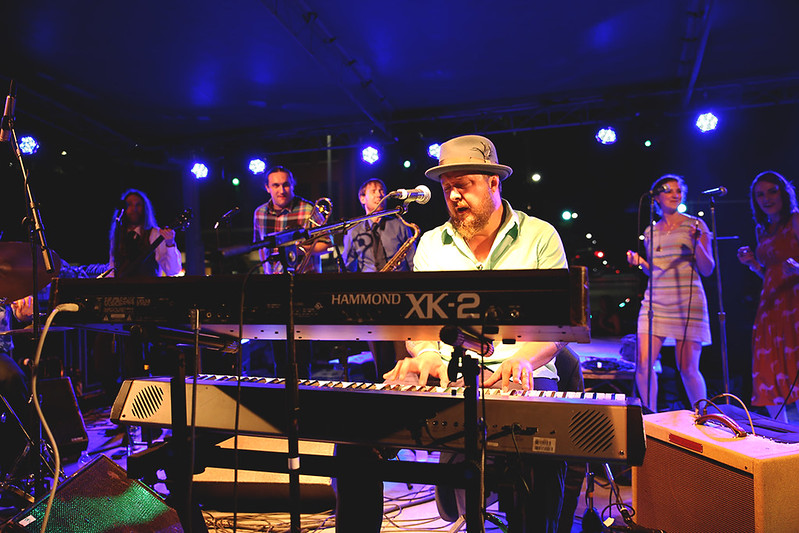 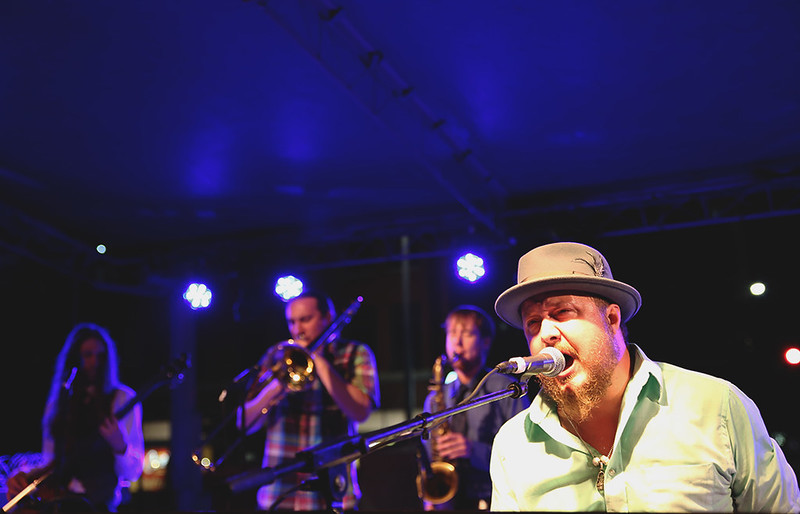 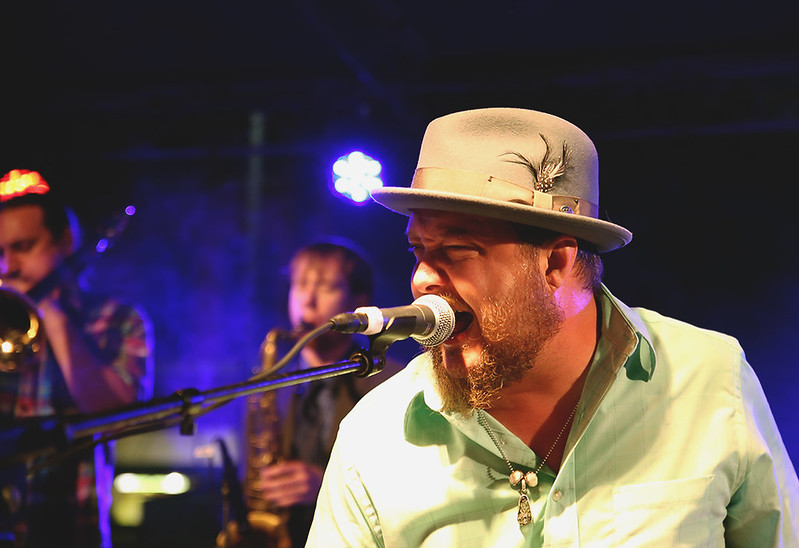 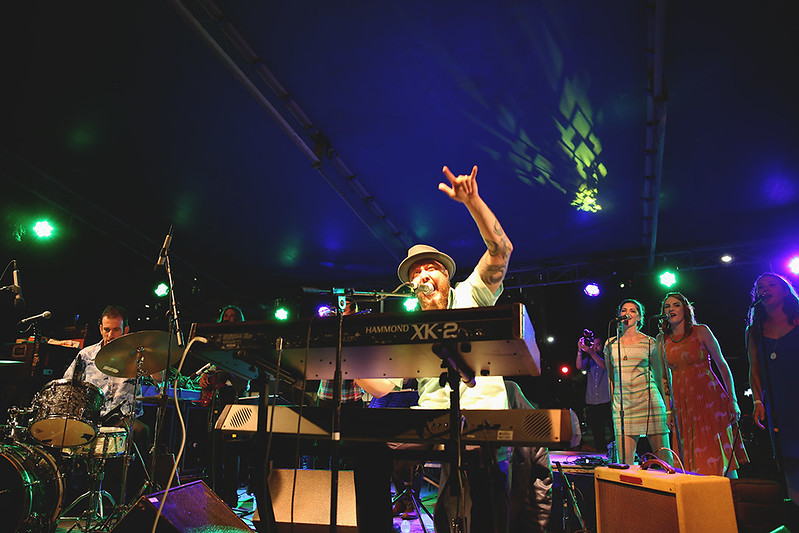 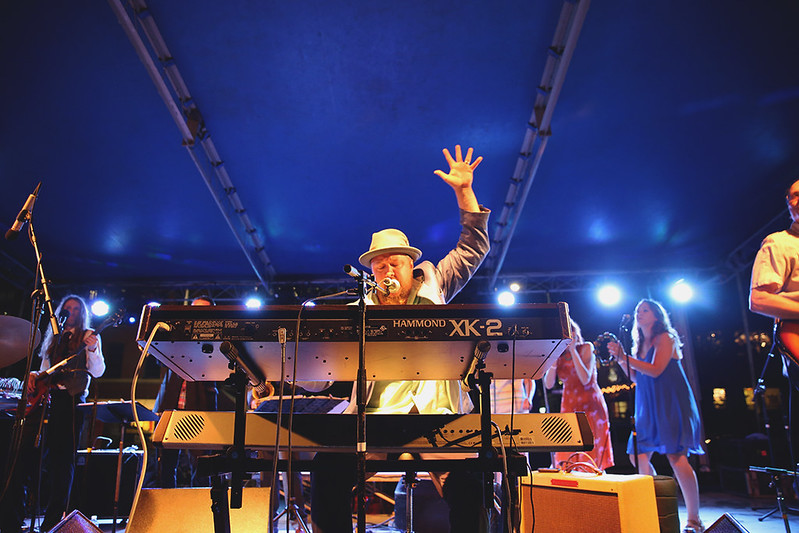 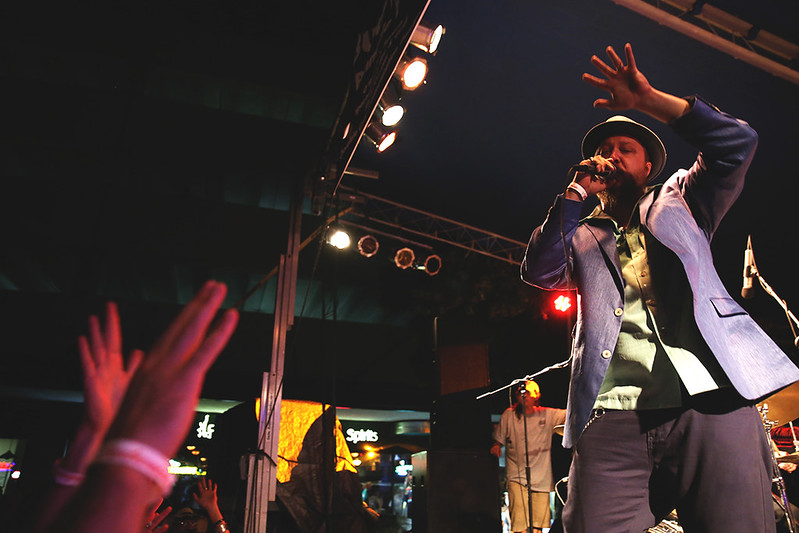