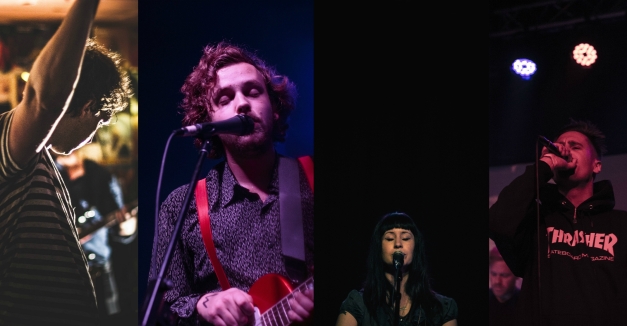 To say 2014 was a big year for Nebraska music seems too simple, but there aren’t many other ways to adequately sum up the year.

Saddle Creek had a few major releases, Josh Hoyer and the Shadowboxers packed The Bourbon for two distinct album release shows, Sam Martin released a long-awaited solo album, Mean Street released a debut record. Universe Contest went on a massive (and massively opulent) national tour. We saw AZP effectively close out South by Southwest. New Nebraska music festivals began and old ones stayed strong. Promising new bands sprang up like mushrooms after a rain and old ones reunited, especially in these final weeks of 2014. We’re sure there’s much more.

Listen on for our five favorite songs and three favorite albums of 2014.

Here’s a Table of Contents if you want spoilers. Chance Solem-Pfeifer is Hear Nebraska’s managing editor and Jacob Zlomke is HN’s staff writer.

And, by the way, if you don’t find what you considered to be some Nebraska’s best releases here, stay tuned. Tomorrow, we put up a playlist of our favorite 50 Nebraska songs of 2014. And later this week, we begin our string of year-end lists curated from across Nebraska music players, experts and scene figures.