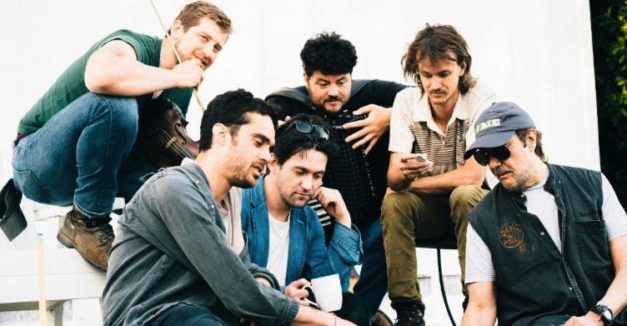 As Oberst mentioned on his Talkhouse podcast appearance with The National’s Matt Berninger, the songs on Ruminations were originally intended to get the full band treatment. He goes on to say that when Nonesuch heard the “demos,” recorded at ARC Studios, they lobbied to release them as-is.

So Salutations comprises the revisited versions, along with seven additional tracks, most recorded at Shangri-la Studios in Malibu with an additional session at Five Star Studios in Echo Park last fall. The tracklist is included below, and features

Oberst will head back out on the road in March, starting a U.S. tour at The Waiting Room on Thursday, March 9. The full schedule is listed below.

Along with the new album announcement comes its first single, a much wilder revamp of “A Little Uncanny,” and its music video directed by The Felice Brothers’ Josh Rawson (it sounds much like the version Oberst toured on with The Standby Club band this past fall, starting in Grand Island). View it below, and pre-order the album via Nonesuch here.

As more artists are added to SXSW, more Nebraskans are marking Austin on their March calendars.

Omaha indie rock band See Through Dresses and Rig 1, the electronic project of Desaparecidos keyboard player Ian McIlroy, are both heading to the massive music, art and tech festival, scheduled for the week of March 13.

Rig 1 was included in the latest wave of official announcements, joining High Up and Closeness on the list of Nebraska bands that will occupy yet-announced showcase spots. McIlroy is fresh off his third solo album Tasting The Mothership, which dropped November 18.

For a second year in a row, See Through Dresses will head south for an unofficial party, this time hosted by Austin-based independent label We’re Trying Records (run by Nebraska native Jordan Hiebner) and video music blog Tiny Table Talks. For those also heading to Austin, that concert is scheduled for Wednesday, March 15 at Pearl Street Co-op, 2000 Pearl St (RSVP and view the full lineup here).

One can reasonably expect more Nebraska bands at SXSW after a total of 12 appeared last year in Austin for concerts both official and unofficial. The Nebraska Exposed showcase has yet to announce its lineup, but is expected to happen again after its inaugural showing at Cheers Shot Bar in 2016.

Matt Whipkey’s “Fred, You’re Dead” carries with it an air of apprehension. A stripped-down version of the Omaha singer-songwriter’s usual work, the piece is a grimace in the face of what’s to come.

The brand new track includes a lyric video that captures similarly somber night skies in Omaha’s landscape, as well as a variety of factory-smoke filled horizons and urban streets which seem devoid of life. A crying harmonica is accompanied by camera shots taken in transit, before Whipkey nearly whispers the words “I’m just worried for my kids, for my country.”

“Fred, You’re Dead” will be on one of two forthcoming albums to be released by Whipkey in 2017, and the song can be purchased on Whipkey’s Bandcamp. Proceeds from the single’s sale will be donated to the ACLU.

Omaha Under the Radar, the city’s premiere experimental music festival, has announced it will host a lineup reveal party on Saturday, Feb 4 at Hi-Fi house. The all-ages event, which starts at 8 p.m., will feature live performances and preview the national roster of artists for the festival’s fourth year.

In its first three years, Omaha UTR has presented more than 200 boundary-pushing artists from 20 cities throughout the U.S., as well as some of Nebraska’s most talented “aesthetic risk-takers,” as founder Amanda DeBoer Bartlett put it to HN before this year’s festival. The experimental/contemporary music festival has also made education a priority, featuring performance-enhancing camps for musicians leading up to and throughout its run.

For more insight into Omaha Under The Radar, read this Q&A with Bartlett here, which previewed this year’s festival. Watch last year’s recap video, produced by Philip Kolbo, below:

Find more shows on our statewide event calendar here. Let us know what you’re seeing in the comments, or emails us with updates at news@hearnebraska.org.