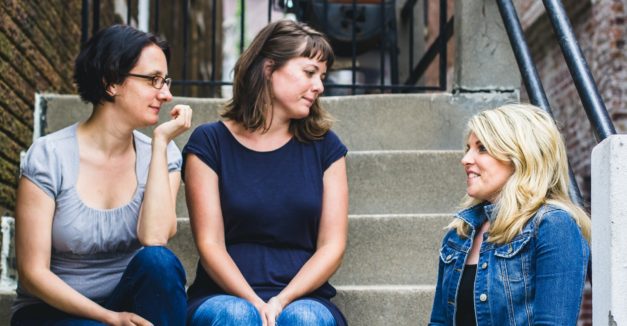 Folks often think of music in two broad categories of classical and pop, highbrow and lowbrow, or fine art and folk art, but there are lots of musical activities that don’t fit neatly into this duality. “Experimental” is sometimes offered as an alternative description for musical outliers, but in many cases these less-familiar approaches employ languages and traditions that have long passed the state of experimentation. Some are progressive, anticipating the future of music. Some are regressive, diving back into the primordial ooze of pure creativity from which all forms of music emerged. Some are meticulously composed and carefully arranged, while others depend on the adventurous spirit and collective empathies of improvisation. Some pieces are built on formal considerations and philosophical underpinnings, while others rely on intuition and deeply-felt emotional expression.

What all of these creative musical adventures share, however, is a life within shadows, with performances mostly relegated to off-nights at clubs or in the basements of avant-garde enthusiasts, and recordings exchanged in small batches on dead media formats. While there is a lot of compelling music happening in the creative “long tail,” finding the best of it coming from isolated fragments of activity can be a chore.

The Omaha Under the Radar festival returns for its third year starting on July 6, bringing many of these disparate musical pursuits together in four days of mind-expanding and genre-bending performances across Omaha. Performers and composers across the country apply to participate in the festival, which makes for a great survey of contemporary music. Nebraskans are well represented, too, from stalwarts like the Mighty Vitamins and Dereck Higgins to newer ensembles like the post-everything drone zones of Bus Gas.

I chatted with festival founder and director Amanda DeBoer Bartlett, a renowned contemporary vocalist herself, about what we can expect at this year’s festival.

Hear Nebraska: For those unfamiliar with Under the Radar or experimental music in Nebraska, how would you describe the festival?

Amanda DeBoer Bartlett: Omaha Under the Radar presents dancers, musicians, poets, and other performing artists from Nebraska and around the country that exist on the artistic fringes – the aesthetic risk takers.

HN: Any surprises in store for this third year of Under the Radar?

ADB: Always! We don’t align with a specific genre or theme, and artists have complete creative control, so every set is like opening a new door to a secret room. I’m always looking forward to the improvised sets, because that’s a big part of my artistic world, and we have a lot of that this year. I’d predict the most alarming sets might be Radical 2 at Slowdown, Screaming Plastic at Project Project, and anything at Milk Run.

HN: Considering how many performances take place in spaces usually dedicated to visual arts, is there a goal to introduce audiences to modern sights as well as sounds?

ADB: We love the artists who are working in multiple mediums and developing rich relationships between visual, sonic and physical disciplines. Groups like ON STRUCTURE, Jessica Aszodi/Jennay Lyle, KATES, and tbd. dance collective, in particular, are digging into highly integrated practices.

HN: Are all of the performers selected through the application process, or is there a mixture of applications and invitations to create a balanced program?

ADB: It’s completely application based except for the large ensemble pieces. Every year, we choose a musical work to close the festival and invite artists from around the country to play on it. This year it’s “Les Moutons de Panurge” (the sheep of Panurge) by Frederick Rzewski at the Slowdown. The piece is ridiculous live, and it’s going to be absolute chaos with the group we have this year.

Other than that, it’s a total grab bag based on who applies. This year, we had about 250 applicants and we selected 40 acts. It’s getting pretty competitive, but the most important factors in being selected are, one, commitment to craft, and two, a hunger for exploration. We’re adamant that the ratio is 50-percent local [Nebraska] acts and 50-percent non-local acts. It’s all about mixing influences, mixing genres and mixing regions, and an application process creates the perfect atmosphere for that. Every year I discover incredible artists that I would have never found if we just brought together people from our own networks.

HN: What kinds of curatorial decisions go into organizing the different nights of the festival? Is it more a matter of selecting performers/pieces that will sound better in particular environments over others, or is it more focused on creating intriguing lineups for each show?

ADB: Some decisions are based on tech setups and other practical matters. Outside of logistics, we want to make the most compelling programs possible, which include lots of variety, contrasting ideas coexisting and a sense of progression throughout each evening. We also want each event to make sense for the venues, which is why kid-friendly events are happening at Joslyn and Kaneko, and the hard-edge groups are mostly at the late-night venues. My personal interests center around finding common ground among disparate creative efforts, which is why you’ll often find a solo classical musician next to an improvised noise rock group. As artists, we’re always looking beyond our training for new ideas and experiences, so this serves the artists, in my opinion. But as audience members, it also creates a different framework for listening and viewing.

HN: Let’s say you’re new to music outside of pop, but you want to dip your toes in the weirder waters of Nebraska—what night would you recommend this year to get people into this music?

ADB: If you’re on the fence, go to the Joslyn event – it’s free and it’s very friendly. Also, “DRUMMING” by Steve Reich performed by UNO Percussion Ensemble is an absolute must hear event. We presented “Music for 18 Musicians” by Steve Reich in 2014 and it completely sold out. It was a really moving performance, and I can’t wait to relive it this year.

The House of Loom show always has a really hyped up atmosphere, and Project Project is going to be super hip. People looking to expand their palates should not miss those events.

Our closing event at Slowdown is going to be absolutely spectacular, with all the flash and pizzazz you could ask for. Dancers, lights, amplified cactus. What more could you need?

HN: Under The Radar is more than a set of gigs—the Soundry workshops focus on getting musicians to investigate new ideas in their own work through instrument building and exploration of extended techniques and performance possibilities. Could you tell us a little more about how Soundry relates to the performance side of Under the Radar?

ADB: The cross-pollination that happens at this festival has led to new collaborations and performance work, and that’s the most exciting thing for us to see. SOUNDRY was developed by Stacey Barelos as a way to get creative artists to come together and explore their work on both conceptual and practical levels. I’d recommend it for anyone – youth to adults – who want to break out of their norm for a couple hours and learn some new creative techniques. I’m definitely going to the Jason Webb workshop!

HN: Under the Radar also features group discussions—how are those formatted with performances?

ADB: The talks are held at the library, and they are pretty informal. Artists from the festival lineup will discuss the preparation and collaborative processes that led to their pieces and attendees can engage with them, ask questions, and get to know the performers on a more personal level.

HN: “Experimental music” in its various forms has a bit of a reputation as a white male pursuit, but both the performers and the pieces lined up for Under the Radar show the much deeper multiplicity of backgrounds happening today. There is also a great balance between relatively academic and more intuitive traditions in this lineup. What would you say to emphasize the inclusiveness of Under the Radar for young artists or fans just getting into this music?

ADB: The festival organizing team is four women from Omaha who were steeped in the classical music tradition. We came together on this project to provide an antidote for artists who feel trapped within the identities of their genres, or who need a platform for their ideas that isn’t bound to an ideology or tradition that might feel limiting to them.

I’ve personally straddled the line between traditional and experimental music for years, and I’ve found that I have much more agency over my creative life when I’m closer to the source – that’s why I work directly with composers to create new pieces or improvise/compose my own work. I still love singing opera, but if I’m working with a living composer, I’m much less likely to be cast as the “saucy maid” or other more harmful representations of femininity.

Even so, the contemporary classical music world is still an Ivy League club in many ways, and this festival is our way of pushing back. The institutional opportunities available for young creatives have requirements that privilege a certain aesthetic language that rejects the subjective, irrational creativity of some non-academic artists. Not to mention the financial requirements of working in the experimental performance world! So many opportunities require application fees and participation fees. We don’t charge artists to apply, and we certainly don’t charge them to perform. We don’t offer large fees (yet!), but everyone who is selected is paid. In these small ways, we’re hoping to level the playing field and bring new voices to the table that might otherwise be overlooked.

Omaha Under the Radar takes place at multiple venues across Omaha July 6-9. The festival begins Wednesday, July 6 at Project Project, followed by performances at the Joslyn Art Museum and House of Loom on July 7. Friday, July 8 features three simultaneous sets at Kaneko, the Bemis Center for Contemporary Art, and Milk Run, and this year’s festival closes on July 9 with an afternoon performance at Kaneko and an evening lineup at Slowdown. Two performance-enhancing camps for musicians are offered at Kaneko throughout the week, and for Lincolnites, there is a “Lincoln Under the Radar” set at The Commons LNK on the afternoon of Sunday, July 10.

Scott Scholz writes about creative contemporary music, hosts the Words on Sounds podcast, and operates Tymbal Tapes. He can be reached through HN’s managing editor at andrews@hearnebraska.org