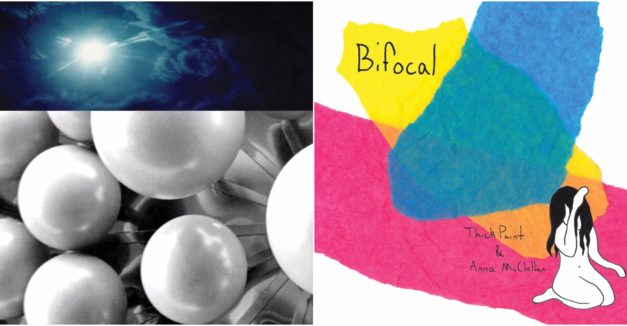 Cursive’s big plans for its new label are starting to take shape, starting with a few of its own notable re-releases.

15 Passenger has announced it will reissue remastered versions of the Omaha band’s first two albums, 1997 debut Such Blinding Stars For Starving Eyes and 1998 follow-up The Storms Of Early Summer: Semantics of Song. They will be available on vinyl (the first time for Storms) on Dec. 1, 2017, celebrating the 20th anniversary of both records.

Originally released by Crank! Records and Saddle Creek Records, respectively, Stars and Storms marked the beginnings of a two-decade run that amassed a huge following and helped put Omaha music on the map. One can hear the early makings of the band’s trademark technical complexity, witty and confessional lyricism and dynamic melodies.

Stars and Storms have both found the capable hands of Ed Brooks, who among other notable projects (Pearl Jam, Fleet Foxes, Mastodon) remastered Cursive’s The Ugly Organ. The former comes on blue and white swirl vinyl and contains a foreword by Washed Up Emo’s Tom Mullen; the latter comes on a white swirl vinyl and includes forewords by guitarist Ted Stevens and the band’s longtime friend and European tour manager Oliver Wyczisk.

Pre-order Such Blinding Stars For Starving Eyes here and The Storms of Early Summer here.

The EP brings the first official recorded output for Thick Paint since its post-Reptar inception and full-band formation. Led by Graham Ulicny, that band’s half bursts with angular guitars and syncopated rhythms that build on its songwriter’s solo work.

McClellan’s half comes two years after her uniquely brilliant solo debut Fire Flames. Her four Bifocal songs depart from its predecessor’s robust classical influences toward sparser, folkier territory — with help from Omaha weirdfolk band Razors on the lead track — while maintaining her trademark aloofness and whimsy.

The two acts embark on a month-long nationwide tour that includes a December 5 stop at Brothers Lounge. See dates below.

A fleet of Nebraska soul, funk and jam bands united last December to play a new festival founded by Lincoln musician Josh Hoyer with the intent on giving back to the community. Encouraged by its success, the festival is coming back next month.

The Nebraska Funk & Soul Alliance has announced the full lineup for its second year on Saturday, Dec. 16 in five downtown Lincoln venues. A $20 donation gets fans access to all 31 bands while all proceeds benefit four charitable organizations — The Bay, Jacob’s Well, LightHouse and Malone Center in Lincoln; and Omaha Home for Boys, Youth Care & Beyond, Youth Emergency Services and Youth Link in Omaha.

“As we see more and more tax dollars being taken away from social welfare, the more important it is for communities to pitch in and help their most vulnerable,” Hoyer said. “This is one way for the creative class to contribute to our cities at large.”

Hoyer called the inaugural event “spectacular,” both because of its community atmosphere among musicians (“I think all the musicians dug being able to hear what everyone else is working on”) and because of it raised more than $6,400.

Find ticket information here and view the full schedule below.

This past spring, 30 local and touring bands and hundreds of fans packed into Omaha house venue Lucy’s Pub for the aptly titled “House Fest,” a two-day affair which celebrated the local DIY scene and its regional connections. It looks to be bigger and better in 2018.

“We want to keep the focus on DIY centric approaches, curating a safe all-ages environment, grassroots networking, and benefit contribution,” McInnis said. “But we want to make it bigger this year, so we’re adding an outdoor stage and working with local businesses to create an even better experience.”

Like last year’s edition, which donated $1,275 to Planned Parenthood of the Heartland, House Fest 2018 will include a charitable component, the benefactor of which will be voted on by the public.

Though the lineup has yet to be announced, We’re Trying Records managing director Jordan Hiebner hinted at again booking both local and nationally touring acts to continue fostering new connections for Omaha bands looking to hit the road.

“Last year, it just felt like everyone in the house was connecting, and the vibes were good and cohesive,” said We’re Trying Records’ managing director Jordan Hiebner. “It’s cool to see so many people looking forward to House Fest already, and we’re excited to bring some new out of state acts to the Omaha scene that we all love.”

Take a look at our picks for the weekend below and find a fuller listing at our statewide calendar here. Tell us where you’re going in the comments and add your own shows here. Email news tips, story ideas and song submissions to news@hearnebraska.org.

Universe Contest, Lodgings, Pets With Human Names, The Good Gurls at The Sydney – Lincoln prog rock band Universe Contest plays the Omaha half of their album release celebration Friday night with Omaha’s Lodgings and The Good Gurls and Des Moines band Pets With Human Names. Get Cot Livin’, the band’s first album since 2014, dropped on Halloween night at Zoo Bar. Find it here and dive in with our album review podcast team here. Music starts at 8:30 p.m., with First Friday art by Bzzy Lps starting at 5 p.m. The show is free. RSVP here.

Carrie Ann Buchanan releases Bones at The Down Under – Two-time OEAA-nominated singer/songwriter Carrie Ann Buchanan releases new EP Bones Saturday in Omaha. A long time in the making, it was recorded in four days at Austin, Texas’ Rubicon Studios in 2015 with Daniel Barrett. Jack Hotel, The Shineys and Minneapolis singer/songwriter Jeff Krause fill out the bill. 9 p.m., RSVP here.