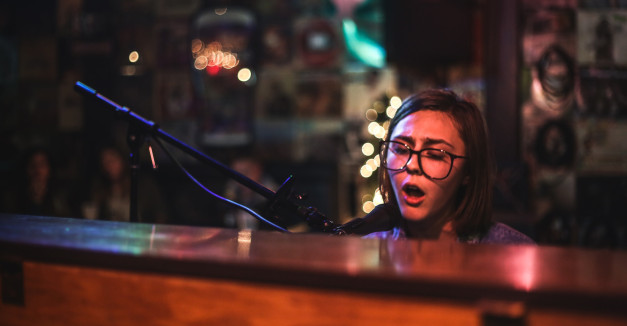 Spend enough time trying to explain the weird, the aloof and the unique (but, you know, actually unique) within Anna McClellan’s music, and eventually you’re negotiating with an intimidating partner: brilliance.

Last week, the Omaha-turned-New-York-based pianist and singer released her 12-track solo debut on Majestic Litter. (That’s the Portland tape label run by The Good Life’s Ryan Fox.) As a piece of work, Fire Flames is a converging pirouette of would-be classical piano, folk ambitions and a dark, young, illustrious voice.

The former Howard frontwoman’s socially sideways lyrics and agnostically intense vocal style bely an album with internal and external pedigree. For one, the record-long musical takeaway is that we’re inches away from a concerto. Ben Brodin’s production and instrumental additions centralize McClellan’s writing in an indie lexicon, but simultaneously reveal the complexity of what her melodies can withstand. And for another, that’s Conor Oberst’s famously twitchy voice boring below McClellan’s on the title track.

Listen to our On The Record podcast reviewers dig into Fire Flames below:

Recent On The Record reviews include The Good Life, Desaparecidos, Digital Leather, Big Harp and more. Listen to all the past episodes below.