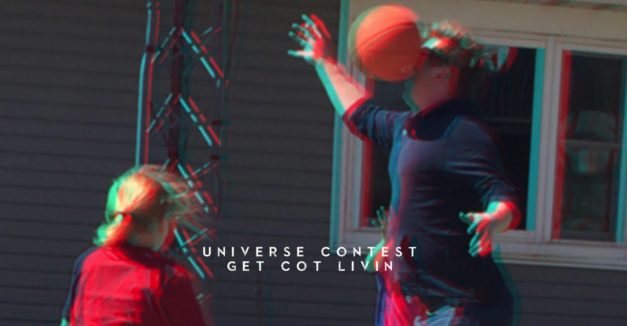 It was only three years ago that Universe Contest seemed on the cusp of relative greatness. The Lincoln prog-rock band had just released its atmospheric and sprawling progressive rock masterwork in We Are The Rattlesnake, its dazzling-lit and daringly-costumed live shows drawing thick, exuberant party crowds both at home and on massive bus tours. Shortly thereafter, a handful of lineup changes sent principle songwriters Joe Humpal and Tim Carr back to the drawing board and the more riff-and-romp rock upon which the band launched.

It wasn’t long before a new band coalesced, refining its reorientation through a steady diet of live performances and quick road-trips. Universe Contest’s long-awaited full-length Get Cot Livin (released Oct. 31 at Zoo Bar) finds the band tying together elements from throughout its sonic evolution with its brand new threads. This record maintains much of the sonic size found on We Are The Rattlesnake, reigned in and focused while shifted into overdrive. The extra gear comes courtesy of its rhythm section, comprised of bassist Saber Blazek (live duties now assumed by Jacob Ledbetter) and drummer Jordan Elfers, arguably two top Nebraska players at their respective positions. With their care (and that of producer Mark Wolberg), the extended jams UC is known for pop in a way we haven’t heard in years.

Get Cot Livin represents a return to more raw, rock-based prog songwriting, shifting the manner in which it builds grandiosity. Jordan Ellis’s nimble and chasing violin is as equally dynamic as former keyboard player John Freidel’s open and grand synth play, but adds its own texture in unique ways, whether by classical interlude or thematic expansion. At the center of it all, Humpal and Carr are the same ol’ recognizable songwriters: the former finding larger meaning in the minutiae, the latter bumping and grinding from seriousness to jokiness and back again. Altogether, it amounts to an effort that displays an increase in chops while maintaining an attitude far more relaxed.

Listen to our On The Record podcast team break down Get Cot Livin in the latest episode (and see the band Friday, Nov. 3 at The Sydney with Lodgings, Pets With Human Names — RSVP here).

Recent On The Record podcast episodes have covered albums by David Nance, Twinsmith, See Through Dresses and Big Thief. Catch up with our Soundcloud playlist below and by subscribing via iTunes here.