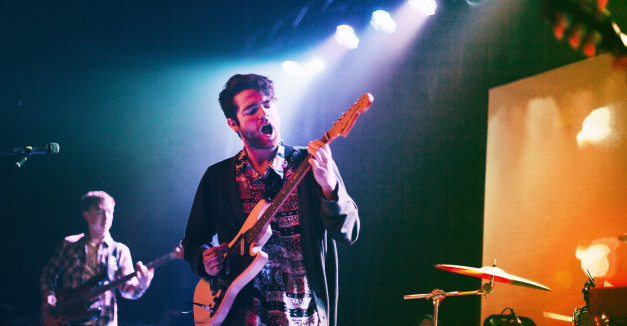 If you’re like us, you’ve been curious about the new Twinsmith album since the October news that Alligator Years would be out on Saddle Creek. In November, Luke Pettipoole of The Envy Corps, who recorded the band in Des Moines, promised a matured and versatile band.

Today, we get our first glimpse at what that Twinsmith might sound like. A.V. Club premiered the first single from Alligator Years this morning. The album is due out May 5, and you can preorder a copy here.

“Seventeen” certainly sounds like a band more comfortable in the studio. The song is less a straight-recording than older Twinsmith efforts — it’s been played with a little bit, at least to the extent that Jordan Smith’s vocals are not clean and sharp, but muddied and distorted.

The band goes on tour in mid-February and caps it off at South by Southwest, March 18-21.

“Seventeen” is just one early glimpse in what’s sure to be a good 2015 for Nebraska music. Last week, Stereogum premiered the first track from Simon Joyner’s forthcoming Grass, Branch & Bone. In July, we premiered “Beat Up Iron” by Kill County for Broken Glass in the Sun. All these albums will have 2015 release dates, joined by new records from Millions of Boys, John Klemmensen and the Party, Icky Blossoms, See Through Dresses, Freakabout and more.

Huge thank you to Lemonly for including Hear Nebraska in their 12 Days of Giving drive.

The Sioux Falls-based web-design company allocated $12,000 to be given to 12 non-profits chosen by their 12 employees. Our former managing editor Michael Todd works at Lemonly and chose Hear Nebraska to receive $1,000. Michael, it’s good to know you still think about us.

The funds will allow us to develop a 2.0 version of our HN Radio streaming application, so we’d like give a heartfelt “thank you” to Michael and Lemonly.

Omaha is hoping to bring more performances to the riverfront with announcement this week that they’d build a small stage at the base of the Bob Kerrey Pedestrian Bridge. As reported by the Omaha World Herald, City Parks and Recreation Director Brook Bench said the stage, which could serve an audience of 500 people, is made for small events.

Though it’s not clear what kind of events will be hosted on the stage, Bench says it will be able to power lighting rigs and PA systems. We’ll wait and see if this becomes an interesting performance space.

Tonight, Bone Thugs-n-Harmony plays The Bourbon. The hip-hop group, which reached prominence in the mid- to late-‘90s, will perform with all five of its founding members. Rapper Dusty Leigh opens. RSVP here.