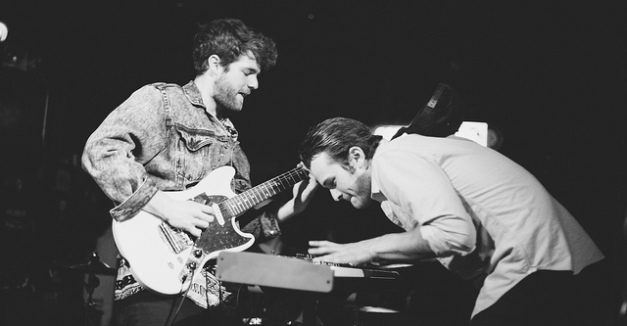 Wake up around 11. Strap on the guitar around noon. Take it off sometime well after midnight and go to bed. Repeat.

For two weeks in September, that was Twinsmith’s schedule as guitarist Matt Regner and vocalist Jordan Smith transplanted to The Sonic Factory in Des Moines. They lived in the studio to record their band’s second record with Luke Pettipoole of The Envy Corps. Twinsmith routinely clocked 14-hour work days to finish the new record.

Alligator Years, which Regner tells us is the title of the new LP, will be out on Saddle Creek Records in Spring 2015.

For Twinsmith and Saddle Creek, which announced the signing last month, the match was made on equal parts chemistry and business-minded approaches to playing and releasing music.

The immersive, marathon recording experience was far different from Twinsmith’s debut LP, where they recorded over several months with friends, carving out time here and there.

“Over the course of months, you can go back a few weeks later and second guess yourself,” Regner says. “We can’t do that with this kind of process. It was a very efficient, professional experience.”

Though news of the relationship officially broke last month, Saddle Creek and Twinsmith worked together for the first time about a year ago when the label released the single “Honestly” for the band.

Regner says the single was just a one-off with no further plans attached.

The singing of Twinsmith is one more step away from the punk-tinged folk on which the label, and Omaha, built its name in the early ‘00s. Currently, the label plays host to pop-rock acts like Mynabirds and Icky Blossoms. Not long ago, Tokyo Police Club was on the roster.

Jeff Tafolla, who’s in charge of licensing and new media at Saddle Creek, says Twinsmith’s sound is an apt fit for the label.

“They don’t sound like any of our other bands,” Tafolla says. “But it was more about their lyrics and the songwriting. The artists on our label don’t necessarily sound alike, but there’s always a good songwriter at the core.”

Talks of Saddle Creek releasing the forthcoming Twinsmith record began in earnest in the late spring.

“We scheduled a few meetings with (Saddle Creek) four or five months ago,” Regner says. “We wanted to do a full-length. We had everything laid out — the budget, the touring support plan. We brought that to them and they said yes.”

Tafolla says that beyond the band’s music there were two important factors in solidifying the relationship. He and other Saddle Creek staff have gotten to know the band, members of whom work at the label-owned Slowdown and Trap Room bars.

“It’s always important for us to like our bands personally,” he says. “We’ve also been impressed by their work ethic. They’ve set up a few tours on their own, and now they have a booking agent. They take their band seriously, and are willing to put the work in.”

Indeed, Regner says treating the band like a business has been integral to their success.

“That puts it in a very cold light when you say it’s just a business,” he says. “But that’s kind of how we think about it.”

Regner says that professional outlook has helped for setting goals and deadlines, mapping out timelines and handling money. Still, he’s sure to note that, if it’s a job, it’s the most fun job he could have.

Going into the studio, Pettipoole worked out an approach and philosophy with the band.

“I told them from the start that the way I like to help bands out is for them to think of me as an extra member for the record,” he says. “It was cool to understand their process and provide them some ideas along the way, interacting more like bandmates instead of telling them what to do.”

So in the studio, Pettipoole’s goal was to build trust early. He talked with the band to understand what they wanted from the record. He says it’s helpful to have someone with different experience in the studio, that he might help the band get to where they wanted to be more efficiently.

Pettipoole says the result is a more polished and mature Twinsmith, that Smith’s versatile songwriting on the record may hold some surprises. He says the marathon-style process allowed them to focus on one thing at a time, get it right and move on. It allowed them to work within the band’s own, relatively straightforward, parameters.

“We didn’t want to layer a bunch of stuff all at once. That’s a way to make a record interesting, but it also means you might not have faith in the parts that you did write,” Pettipoole says. “So we wanted to take two guitars, drums, bass and a little flavor of synth and see what we could make with just those elements and vocals.”

“From here we’re both working toward the same goals,” Tafolla says. “The band is finishing the record. Once that’s done, we’ll work on artwork, make decisions on packaging, set a release date, work on a marketing plan, hire a publicist, etc. The band will be involved in all of those decisions.”

The band has its sights set on a spring tour. The quartet is no stranger to the road, touring the Midwest, the East Coast and hitting SXSW all in the last year. But with a label-released album and a booking agent on their side, this upcoming tour — booked in conjunction with South by Southwest — will be the band’s most ambitious to date. And that’s the way Regner would have it.

He says it took the band some time to work off the hangover from the recording process, but now back into the rehearsing mode, preparing for local shows with Neva Dinova and Oketo,  they’re itching to get on the road again.

“I can’t wait to be on tour again. Once spring rolls around, we’ll make up for some of that lost time,” Regner says.

Regner says he’s not as comfortable in the studio yet as more recording-experienced guitarists might be: Recording is the work and tour is the pay-off. That’s where the band’s year-old decision to bring Oliver Morgan (Little Brazil) in on drums proved handy. Regner notes how much more comfortable the more seasoned Morgan was in the studio than he, Smith or bassist Bill Sharp.

Pettipoole says Morgan’s presence on the new record was an important part of separating the tracks from other pop-minded bands.

“He plays a lot differently than you would expect a drummer in a Twinsmith-kind-of-band to play,” Pettipoole says. “He plays a lot more like a hard rock drummer, a lot of fills, more complicated. It enhances the songwriting. The songs are direct, very poppy. Adding Oliver takes the songs in a different direction.”

Pettipoole, who has been with The Envy Corps for more than ten years and through releases on different labels, says that, even in the face of a music industry in flux, the basics still apply. Have a good product, and tour it hard. But the most important thing is to not burn yourself out.

“The way to do that is remember that there’s always the next song to write, always music to make,” Pettipoole says. “The reason we’re still a band after ten years is that we enjoy getting together in the room. I think those guys have the same mindset.”

The opportunity to release a record on a renowned label is a very tangible mile-marker of a band’s progress and success, one that Regner and Smith have been working toward since they started playing together in Betsy Wells more than a half-decade ago.

“It’s one of the initial goals you set as a musician,” Regner says. “It’s definitely special.”