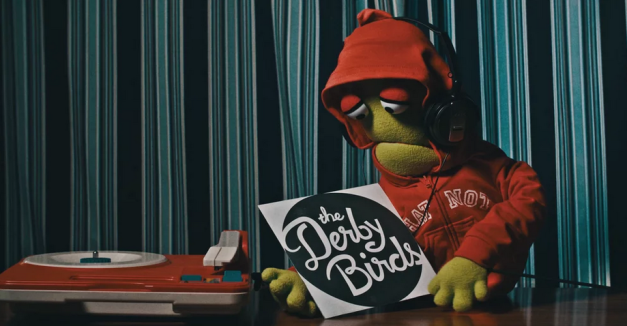 There’s something nostalgic about on-screen puppetry. Considering the art-form’s 3000 BCE advent, it speaks to our shared, experience-bound cultural memory that our minds may drift straight to Sesame Street (or, more irreverently, Crank Yankers).

It’s why The Derby Birds new video — “Landline,” premiering today via HN — feels so slick and so friendly at once. Like dialing a significant other via rotary phone, it conjures the romantic and old-fashioned. “Landline,” taken from the Omaha alt-pop quartet’s self-titled 2014 debut, calls upon the sort of simpler, carefree essence of a summer all the more viscerally against director Aaron Gum’s and Nathan Hack’s puppeteering.

Icon One Presents “I’m Still Standing” at House of Loom – It’s been five years since Dominique Morgan emerged on the scene, releasing A Thin Line Between Love and Hate. He celebrates that fact (and his birthday) tonight at House of Loom. Morgan has led the charge in the Omaha R&B scene, working hard for inclusion and diversity. It’s one of the things that he finds vital to the music community.

“The most important thing that I’ve learned is that you get as much as you give back in this scene,” Morgan says. “Supporting other artist shows, collaboration musically, community investment is essential. Give without expecting anything back and you will be blessed abundantly.”

DJ Mellie Mel and Tricia Pugsley aka DJ Shor T will open the show with and East Coast v. West Coast battle. Entry to the 10 p.m. show is $5. RSVP here.

Night Owl Pub Fundraiser – The new Lincoln pub/music venue is sprucing up their facilities, revamping its sound system and making improvements to its green room. Jackie Storm has moved her open mic night to the 13th & Arapahoe bar. It hosts a fundraiser concert Saturday to assist its improvement efforts. Performers include Evan Bartels, The Wildwoods, Lucas Kellison, Scott Severin, Gabe Nelson, Kyra Sallans, Basic Lands, Jake Kloefkorn, Scarftough and Sam Stacy. Music starts at 8 p.m., with a poetry reading by No Name Reading Series at 5:15 p.m. RSVP here. Can’t make it but wish to donate? Do so here.

Loom 10-year anniversary at House Of Loom: The dance party series celebrates a decade of grooves tomorrow night at House Of Loom. New York DJ Raven Fox joins resident DJ and co-owner Brent Crampton and Keith Rodger aka DJ Kethro. Doors open at 8 p.m., with music from 9 p.m. to close. The cover is $5 until 11 p.m., $8 from then until 2 p.m. RSVP here.

We featured a video interview with Crampton yesterday, in which he discusses loom’s 10 year run. Watch it below:

There are a ton of other events and shows this weekend. Head to our statewide calendar here for a fuller listing. If you do not see your show or one you plan to attend, leave it in the comments, send it to news@hearnebraska.org or add it yourself with the “Contribute” button at the top of the homepage. Happy concertgoing!