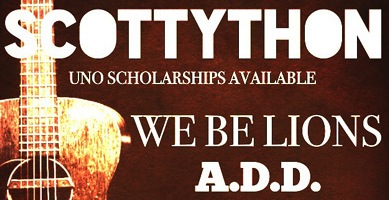 Scott Limbeck was a devout local music fan, especially when it came to supporting his friends. With friends in bands like A.D.D. and Super Tasty, the Omaha resident was stageside at nearly every show, always the first to dance and occasionally an on-stage guest.

Limbeck was also, by all accounts, one of the nicest, most unselfish humans around. His enthusiasm extended from music to supporting family and friends unconditionally.

In 2009, Limbeck was tragically killed in a hit and run accident at age 24. As friends and family came together to honor his life, they wanted to find a way to give back to the community — in the spirit of the way Limbeck lived.

“We wanted to put on a show for others, while celebrating Scott’s life, and give back to the community all in one event,” says Shaun Shepoka, family friend and concert organizer.

Scottython started the summer following Limbeck’s passing, a way to memorialize him via his passion. It has grown each year since its inaugural event, drawing nearly 600 supporters in its last run. Shepoka says they hope to raise at least $6,000 this year through ticket sales and commemorative sunglasses, which would allow for 12 scholarships.

“We want to help as many students out as possible, which is what Scott would have wanted,” Shepoka says.

In addition to giving back to the community, Limbeck’s family and friends hope to spread the positive attitude with which he lived.

“It also is a message that you can take a negative situation and still be able to create a positive,” Shepoka says. “It shows that one person’s life can make such a huge impact on so many people.”

The concert begins at 7 p.m., and entry is $10. Scholarships are given via sign-up at the event. Sunglasses will be sold from 7-9 p.m. or until supplies are exhausted. RSVP here.

Almost Music and Solid Jackson Books are turning two this weekend, and it’s owners are throwing a star-studded concert Saturday to celebrate.

Owner Bradley Smith says that the event gives Almost Music a chance to show appreciation to loyal customers and to celebrate the music community.

“This event means a lot to me in the milestone sense,” Smith says. “I’m also grateful to the bands and artists that gladly participate. It’s constantly astounding to me how much diverse artistic talent we have here in Omaha.”

The festivities start at 4 p.m., including food and sale specials. All books and used records will be 15-percent off, while new vinyl will be discounted to 10-percent. RSVP here.

This weekend features a packed slate of intriguing shows, including a pair of album releases. There are some tough choices to make (especially tonight), so here’s some help.

Tonight, Eli Mardock revisits Eagle Seagull’s self-titled debut album at O’Leaver’s with Little Brazil and The So-So Sailors. It’s tough to call this a full-on reunion show, with only three former members. Still, it’s the first showing for Eagle Seagull in any form since its heated breakup in 2010. Mardock will be joined by his wife Carrie, brother Luther (for the first time since Eagle Seagull was written), guitarist Myles Jasnowski, bassist James Fleege and drummer Lucas Kochbeck. Kochbeck joins the band from Hamburg, in the U.S. to work on a new project with Eli entitled The Kiez. Read about that band and more in our Q&A with Eli Mardock here. RSVP to the show here.

At Brother’s Lounge, Omaha soul band High Up will headline its first show alongside Lineman’s Rodeo. The six-piece outfit just released the second of two singles, “You Can’t Give Up On Me,” recorded with Ben Brodin at ARC Studios in August. We visited with the band during their studio session and at its practice space, where they chatted about its karaoke beginnings and their slick recording process. See that interview here. RSVP to the show here.

Saturday, Omaha singer/songwriter Mitch Gettman releases his long-awaited third album Dichotomy at Slowdown with Custom Catacombs and Charlie Alley. Earlier in the week, he debuted another music video, this time for “500 Centuries,” which is featured on the new album. See that video below. RSVP to the show here.