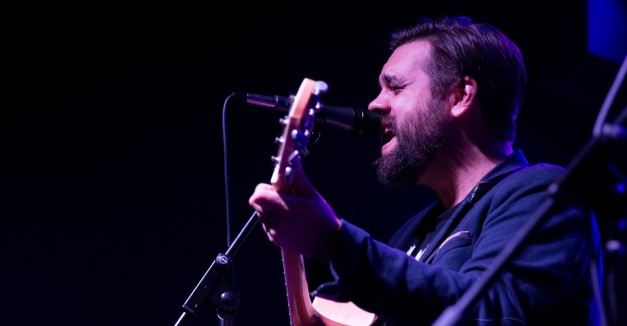 Revisiting old music and lyrics is much like gazing back through one’s journal. It can be a nostalgia trip, at times both heartening and groan-inducing. For some, like Lincoln musician and former Eagle Seagull frontman Eli Mardock, it can be indicative of how much has changed.

“I definitely don’t think it’s a perfect album, but I think it’s a nice snapshot of that time in my life,” Mardock says. “The lyrics are really melodramatic. I wouldn’t wanna change it now because my 34-year-old self is gonna feel a lot differently about some things.”

Mardock will relive his youthful songwriting self in front of a live audience Friday, as Eagle Seagull makes a low-key return at O’Leaver’s with Little Brazil and The So-So Sailors (RSVP here). The lineup looks much different than the one we reported in August, as he’ll be joined by his wife Carrie, his brother and founding member Luther Mardock, Mesonjixx/A Ferocious Jungle Cat guitarist Myles Jasnowksi, AZP bassist James Fleege and drummer Lucas Kochbeck.

When we caught up with Mardock, he was finishing a day session at Silver Street Studio, working with Kochbeck, Fleege and Jasnowski on his new Hamburg, Germany-based project entitled The Kiez. In the following Q&A, Mardock talked about his onstage reunion with his brother, his venue operating philosophy and unearthing the songs that launched his music career.

Hear Nebraska: It has been ten years since Eagle Seagull’s first album. When you look back and think of it now, what’s the first thing that comes to you mind?

Eli Mardock: The thing I’ll remember most about that is that, I think for me, it was the album that really started everything. Everything I’ve done in music at all, that album was the starting point. Before Eagle Seagull, I’d never really been in a band. I played solo stuff. That first album started that way, and I slowly added band members as I recorded it. That’s kinda how that happened. I’ve always remembered it that way. I definitely don’t think it’s a perfect album, but I think it’s a nice snapshot of that time in my life. The lyrics are really melodramatic. I like alot of them still. I wouldn’t wanna change it now because my 34-year-old self is gonna feel a lot differently about some things.

HN: It’d be like going back and whiting out your diary.

EM: Exactly. Like saying, “Oh, that was a stupid idea.” I mean that’s exactly what it’s like. It’s been a lot of fun. Its really just been cool to get together. I haven’t played music with my brother in ten years. He quit the band very early. He did a lot of the guitar on recordings but he was getting married and got a job in Omaha at the time and we were based in Lincoln. He was just having a hard time being in the band, so he quit pretty much right as we were getting started.

HN: I was gonna say, that’s right as you were taking off pretty quickly. If he was ready to settle down…

EM: Exactly, yeah. It’s too bad, because he didn’t really get to experience all the stuff that the rest of us did, but he was a huge part of it. I still feel like it’s partially my fault that he didn’t get the recognition he deserves for doing the majority of the guitar on the first album. Ten years later, it’s really fun to play with him again and hang out.

HN: When did you start thinking of this show as a possibility?

EM: I was just hanging out with a friend and we were talking about something and he was like, “Wasn’t the first album release almost 10 years ago?” And I was like “Yeah, crazy.” And so we were just thinking that it would be fun to do a 10 year show. I hadn’t played these songs in a while.

HN: What has it been like to revisit those songs?

EM: It’s been weird. Well, I don’t know if it’s been weird. The album came out 10 years ago, so some of those songs are 11 or 12 years old. I would’ve been 21 at the time. You’re a lot different 12 years later than you were then. There’s a lot of things I would have done differently. It’s funny to look at my songwriting back then. Eagle Seagull, they’re very moody songs with all these changes. There are no songs where it’s like “Here’s the verse, here’s the chorus.” There are all these changes, and some of them are really sprawling and really long. I was desperately in need of an editor, I think. But that’s also part of the charm of it as well, and kinda the appeal of that album. It definitely sounds like there wasn’t some sort of commercial fella’ leaning over me. It’s a very raw album, and the songs are really raw, so that’s been fun.

HN: Have you kept a lot of stuff as is or have you done a little bit of self editing?

EM: I havent been concerned at all with making those songs sound like they do on the album. I mean, they do because they’re those songs. But when it comes to those live versions, the core elements are there. But Lucas is one of the best drummers I’ve ever played with. I don’t wanna limit him by saying “You have to do it exactly how it is on the album.” And same with James and Myles. It’s really just kind of about having fun, enjoying the songs and playing them so they sound fresh.

HN: [The addition of] Myles seems like a neat twist because of his stylistic background

EM: Yeah, he’s just great player. What’s great about him and James as well is that they’re great players, they learn really quickly, and we’ve been working with them with this other bands as well, The Kiez, which is this German project. Myles was doing guitar work and James is doing some of the mixing. I’ve been spending a lot of time with those guys anyway, so it made sense. We’ve been doing some live stuff with the Kiez as well, so I thought hey, maybe while we’re doing this, they can help me with this other show we’ve got coming up.

HN: Have you thought much about these songs since the band ended? I don’t know what reason you would’ve had, as you’ve been involved in other projects and you have [Vega] now.

EM: Yeah, I had some people ask if there is going to be a new album. Yeah maybe, I dunno, but probably not. I may decide one day that I have a bunch of Eagle Seagull songs that I wanna write, but I dunno, it’s tough. I’m really putting a lot of time and 100% committed to Vega, to this new project. I also think, Eagle Seagull, we broke up five years ago. If I did really wanna do another album or do some touring, I kinda feel like the project is dead, it’s gone. I have energy to put into other stuff. Eagle Seagull kind of even pre-dated Facebook and all of that. If you look back on it, we were a Myspace band. A lot of the technology was different. We don’t have a lot of songs on YouTube, which is a big no-no now. I’m excited to do something else that is totally different, and the Kiez is a totally different project. I’m not saying no I would never do it. If there was some demand I might be interested, but I’m not sure there is. I think a show like this is fun to do but I’m not thinking anything beyond it.

HN: You have Vega now, and I was just curious. We talked about Eagle Seagull taking off quickly, you did the overseas thing and had a good run. What from that experience has helped you with the other side of things at the venue?

EM: I definitely have a lot of empathy with bands that are on tour because I’ve been in that position. I know what it can be like to be in a Sprinter all day and you roll into a venue and sometimes you’re grungy, maybe you’re really hungover from last night. It’s nice to have staff that are really accommodating. It’s nice to have perks. A green room that is clean or something as small as having the wifi password printed out and posted to the wall in the green room. Just so that everything is really easy for you when you get there. One awesome thing we’ve heard from bands is that it’s one of their favorite stops on tour, from staff to going through all of the numbers at the end of the night. I never had anybody go through the numbers with me from a show. I never had anybody show me what the cut was or why. That’s probably naive of me, or I was probably drunk after the show. But it’s different now, and I think that a lot of bands really appreciate that.

In the “Punisher” video, TKO (who chooses to be referred to by his stage name) drops a confident, sneering, fast-paced delivery over an epic backing track. TKO says the video, directed by younger brother Frank Grimes, puts an emphasis on “traditional hardcore hip-hop,” where the focus is on hard-hitting beats. It’s the title track to his Punisher LP, which released Sept. 26.