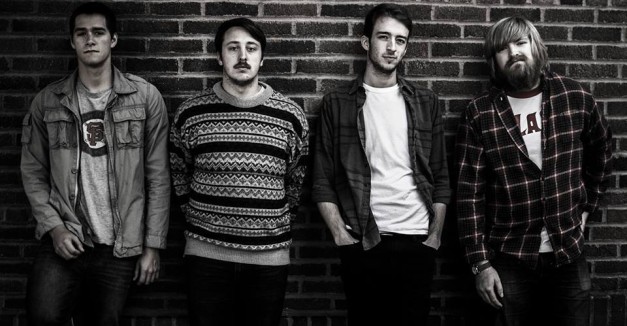 The first emphatic admission of burden on Walk By Sea’s new EP comes within the first couple of minutes, during the album’s upbeat opening track. Change, whether through abandonment or voluntary separation or because of the last straw, is an ongoing coping process.

“Today hurts as much tomorrow/yesterday I fell apart,” the band sings in a common indie rock shoutalong. Facing the problem is the first step, acknowledging its seeming impossibility while also letting yourself be alive.

As The Night — the Lincoln folk/rock band’s second EP — shoulders plenty of drama, facilitated by swaths of ‘90s alt-rock guitar leads, upbeat acoustic pop chords and mournful ballad. The vocal-only breaks in “Joshua” and single “Drummer Boy” drive home burden-shedding experiences. After its admission that the process will hurt, the voices on this EP are prepared to put excess baggage (“save your own damn self” and “I won’t carry you any longer”) on the chopping block.

The bittersweet payoff becomes clear in the end. As The Night’s closing track, “Mourning,” deals with the death of a young person. Implicit in the message, soaring on another group vocal line, is the reason for navigating the high waves of a choppy sea: there isn’t enough time to let oneself be consumed.

Walk By Sea — comprising drummer Brandon Ramos, bassist Kade Clark and guitarist/lead vocalists Jacob Ignagni and Zachary Visconti — displayed its musical versatility at this year’s Lincoln Calling, playing a stripped down set at Tower Square before rocking The Bourbon’s front room. The Lincoln foursome returns to the O Street venue to release As The Night this Saturday, with an all-Lincoln lineup of Evan Bartels, Powerful Science and Betafauna. Admission is $5 for 21+, $7 for 18-20. RSVP here.

When A Ferocious Jungle Cat frontman Will Harman told us over the summer that the Lincoln funk sextet would release its debut full-length this Autumn, one thing could be guaranteed: it would move you.

The medium, however, has been slightly altered. As Harman said then, the transition from More Machine Now Than Man to now has been colored by changes in personnel — namely, the addition of guitarist Myles Jasnowski and Harman’s move to bass — and have given the band a bit more complexity.

“Feed The Vibe” is the late-night funk debut from A Ferocious Jungle Cat’s self-titled LP, which releases independently tomorrow. The band self-produced and self-recorded the album live during an eight-hour session in an Aurora, Neb., barn.

And the cornerstones are strong with this track. The brothers Harman weave a solid groove as Will grows into his bassist role, and Jasnowski’s tone and dexterity give it a flowing liquid feel.

A Ferocious Jungle Cat celebrates the release of its debut LP tomorrow night at Zoo Bar with Mesonjixx. RSVP to the 9:30 p.m. show here.

Now, the debut of “Feed The Vibe”

A day ahead of its new album release, McCarthy Trenching plays tonight at Zoo Bar with Mike Semrad and Kerry Eddy and the Current Situation. “More Like It,” the Omaha folk duo’s fifth record, drops tomorrow on Sower Records. Earlier in the week, our On The Record podcast team reviewed the album, which might be its favorite to date. Listen to their conversation here and below. Tonight’s show starts early at 6 p.m. RSVP here. Then tomorrow, McCarthy Trenching plays O’Leaver’s with Bud Heavy and The High Lifes RSVP to the 9:30 p.m. show here.

Also tonight, Beach Slang returns to O’Leaver’s with fellow Philadelphia band Lithuania and Brooklyn’s Worriers. Beach Slang has blown up as of late, on the strength of frontman James Alex’s earnest, bleeding-heart take on punk rock and the band’s fuzzed-out Replacements-esque rock. Its debut LP The Things We Do To Find People Who Feel Like Us  has garnered multiple glowing reviews (from Ian Cohen, even!) Beach Slang recently played night two of The Fest in Gainesville, Fla., a performance to which our videographers were privy; see our live video here. As for Lithuania, watch later today for our feature interview with Dominic Angelella and Eric Slick. RSVP to the 9 p.m. show here.