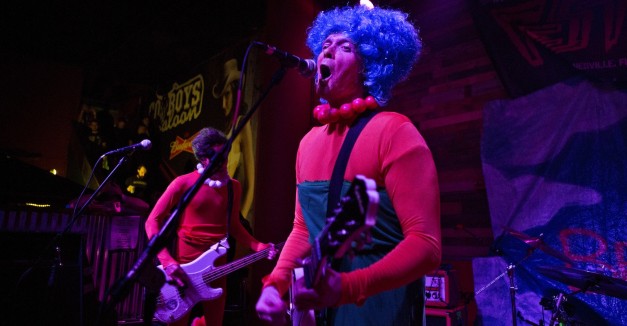 Halloween at The Fest was a sight to behold. Costumes ran the gamut from simple face-paint to shogun-level armor. But even as the crew at Cowboys hung a sheet with “The Beach Slangs” messily painted across it, it was unclear how decorated the band would be:

With the mood light, and the crowd full to bursting across the wooden dance floor, Beach Slang erupted into its 45-minute set with the kind of energy you’d find at a homecoming.

By most accounts, playing at Fest is both literally and figuratively like playing for one’s friends and family. Frontman James Alex is one of the most earnest, sappy indie-punk artists around, and he wasn’t shy about it. From the rolling opening drum fills of “Kids,” — track two from Beach Slang’s debut EP Who Would Ever Want Anything So Broken? — through its searing riffs and chugging bass line, Alex issued a reassurance to all those kindred spirits in the crowd, the outcasts searching for their way: “The kids are alright, they’re just too high to fight.”

The Philadelphia foursome released its first full-length, The Things We Do To Find People Who Feel Like Us, on Polyvinyl Records the day before its set. So while Beach Slang leaned heavily on new material, a raucous Fest crowd matched its energy for an old favorite in “Kids.”