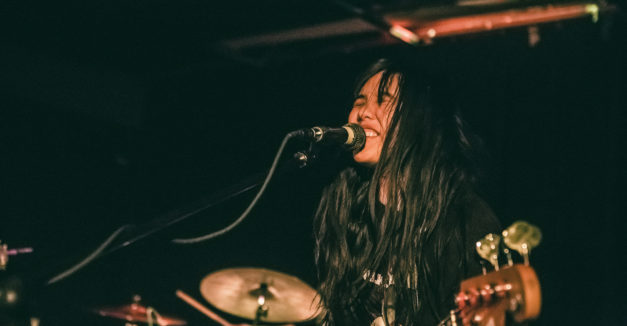 Review and Photos: Both and Hakim play Duffy’s Tavern

With a note of cautious optimism, Lincoln’s hip-hop scene might be poised for an early-2017 step into the spotlight. At least, it’s been a good two weeks for believing so.

Last week, Duffy’s hosted Good Gospel Vol. 3, the hip-hop showcase curated by Sleep Sinatra, and last night, the venue was home to Jingle Beats, which promises to be the first annual, featuring Lincoln’s Hakim, Omaha’s Both and DJ work by Spencelove.

Hakim took the stage with New Orleans native and Lincoln transplant Dey-Jean (playing the vivacious foil to Hakim’s cool-tempered charm) to perform a primer set of recent output, including tracks from last month’s Royale W Cheese. Recently, Hakim has been one of the most visible figures working in Lincoln hip-hop and, to show for it, he gets a crowd of around 30 people to work with. Which is not bad for any Thursday night show, but especially considering downtown Lincoln venues have in the past gone months and months without a single hip-hop show.

His live flow is deft, sometimes even more nimble and cleanly delivered than on the record. As on “Foolish Kids,” played near the end of the set, Hakim’s writing emphasizes verse-driven narrative and motion more than lyrical punches, to a point that feels almost nostalgic. Like Conny Franko (who headlined Good Gospel last week), the whole effect is more important, or at least more perceptible, than its details.

Overall, the set aims high. With only sparing use of a backing vocal track and a self-assured stage presence, Hakim’s ambitions are laid bare. Still, there’s no pretension. This is a local show, after all; he probably knows half the people in the room.

Both returned to Lincoln for the second time since they packed Bodega’s during Lincoln Calling. As always, Scky Rei blurs the line between aggro and slacker in his delivery. Producer INFNTLP plays the caffeinated class clown. And, as always, it feels like the two are effortfully obscuring their own sheer talent. The gags between tracks are fun, but the real takeaways are INFNTLP’s cunning production, which continues to feel brand new, and Scky Rei’s ascension from sleepy stoner to emphatic raconteur and back (which, at its best moments, channels late Pusha T).

With more than 100 people showing up to Duffy’s between last night and last week, the optimist wants to believe it represents sustainable momentum for a fledgling and immensely talented hip-hop scene. 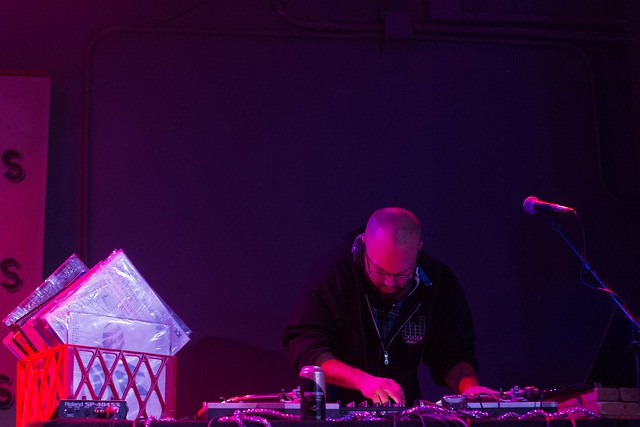 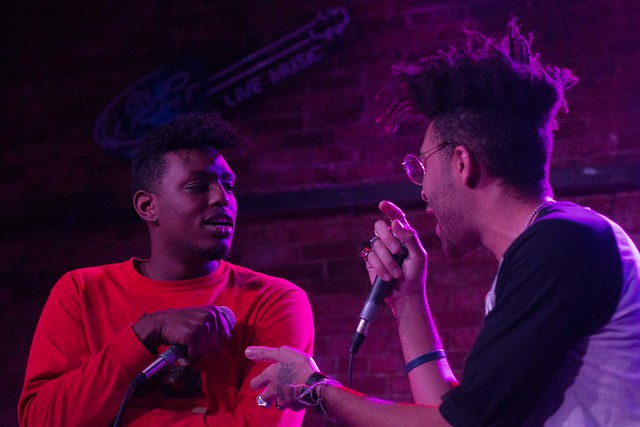 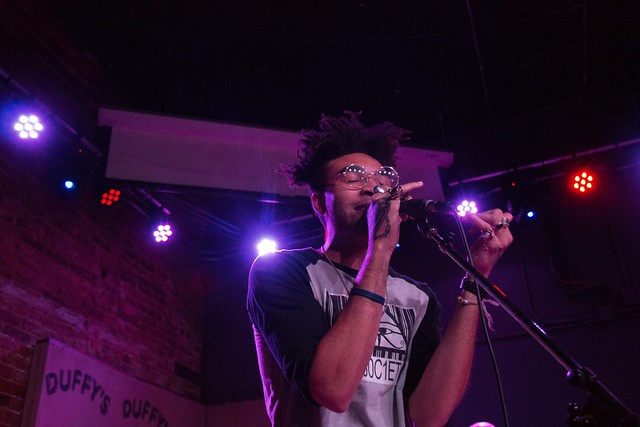 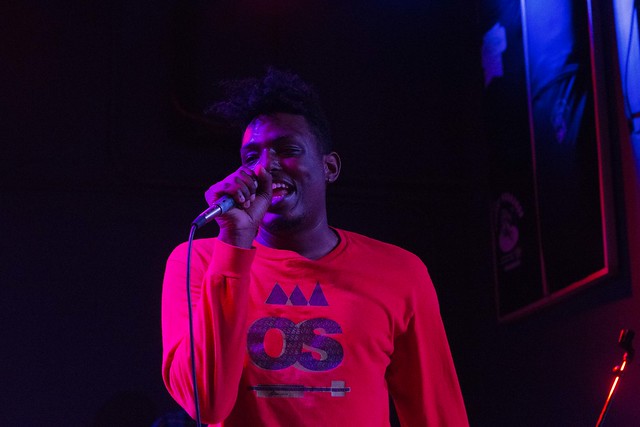 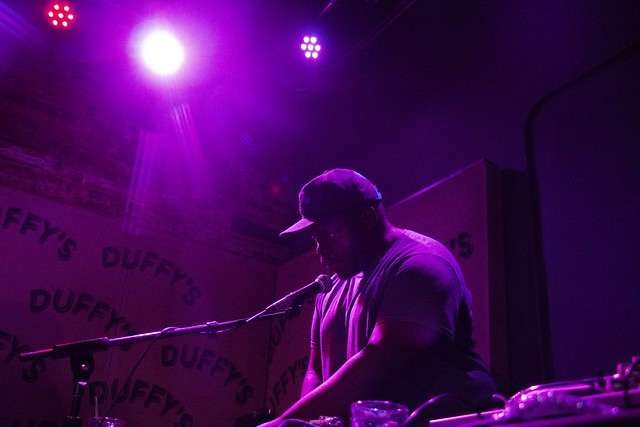 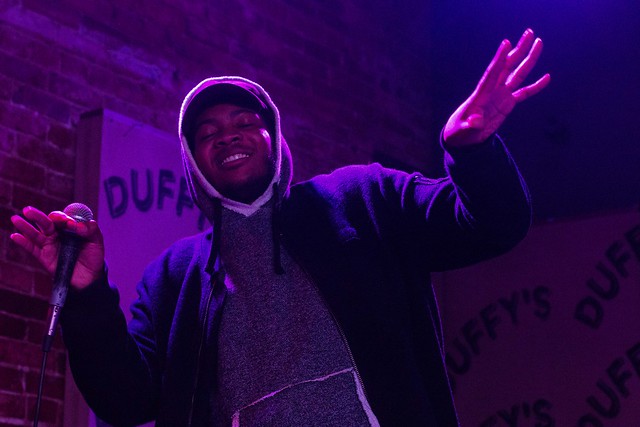 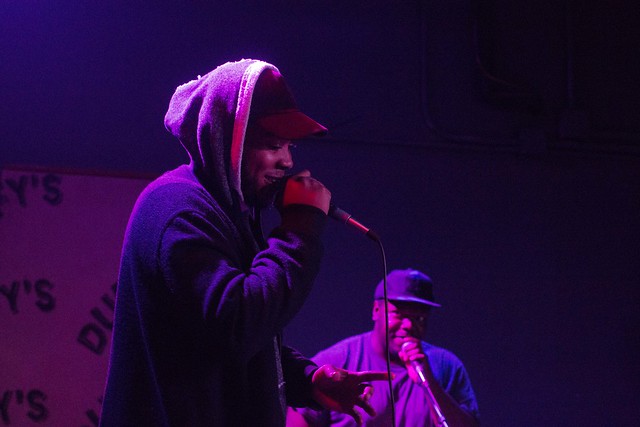 Last night at Lookout Lounge, Oquoa played with Hellrazor and Millions of Boys. Our Lauren Farris was on hand to capture photos. 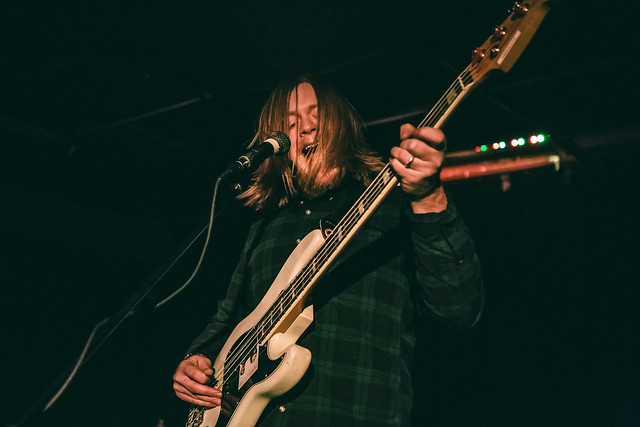 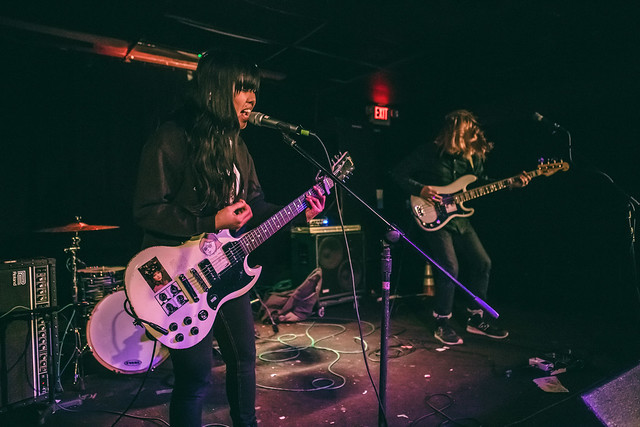 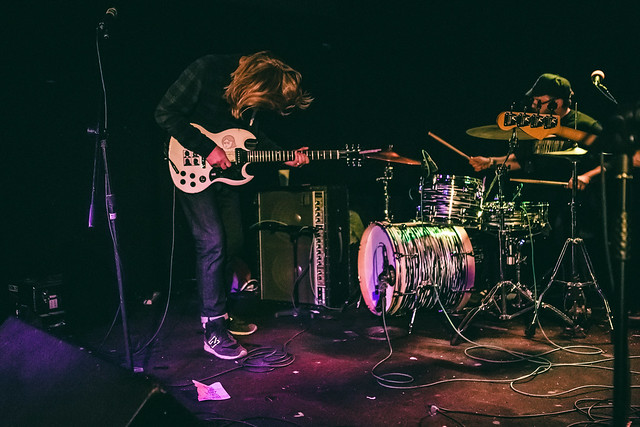 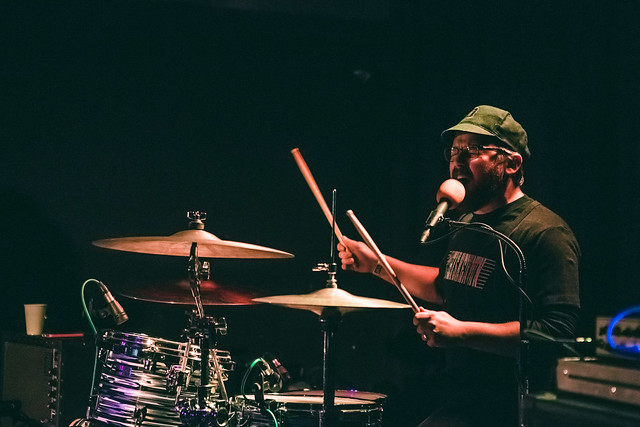 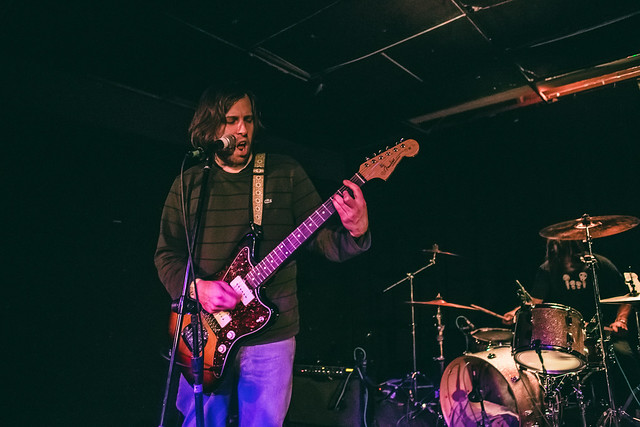 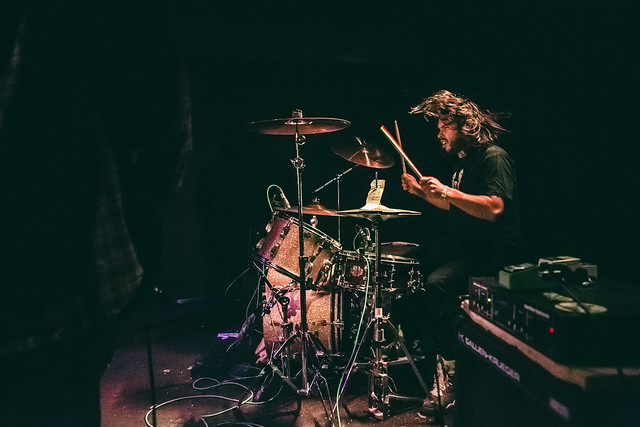 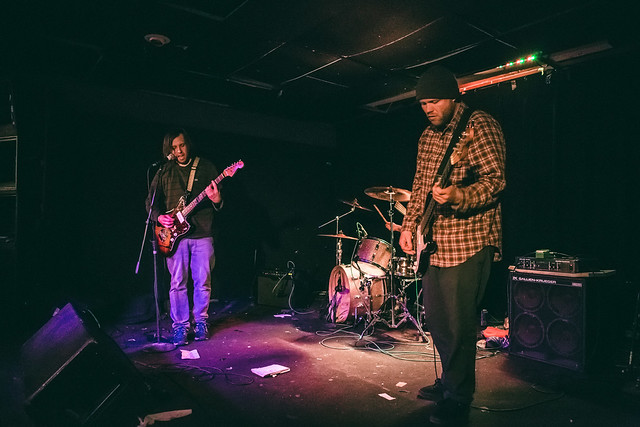 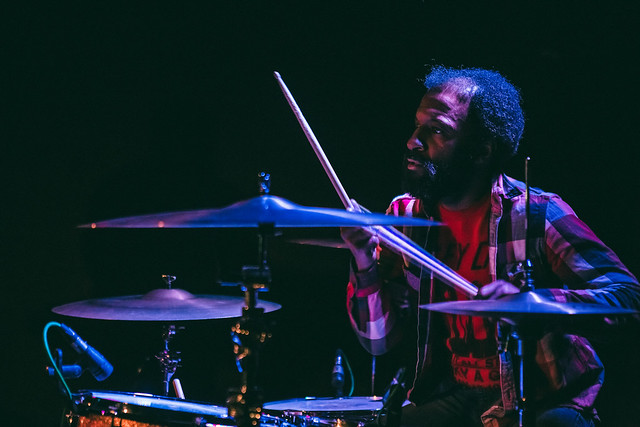 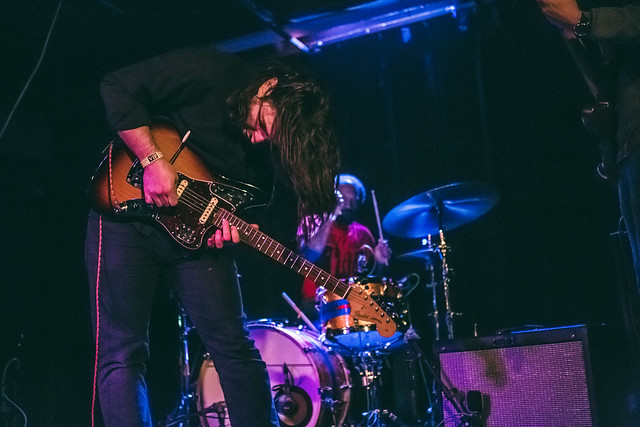 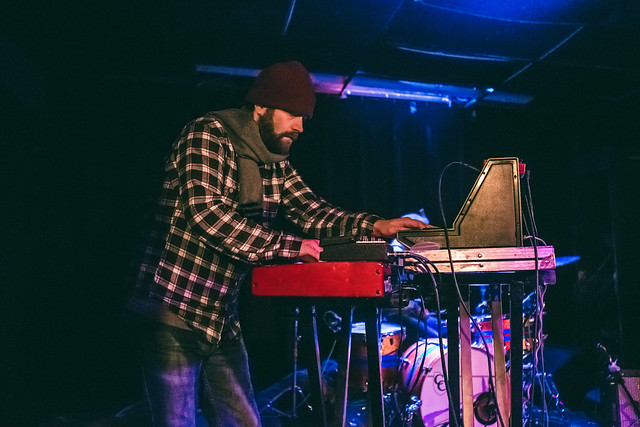 The show, which will run March 2 through  March 5 at the Johnny Carson Theatre in Lincoln, is a post-punk musical about the events of Sitting Bull’s final years. Sitting Bull was a Hunkpapa Lakota holy man who led his people in active resistance against the United States government. He was a prominent leader in the Battle of Little Bighorn, in which George Custer and his cavalry were defeated by Lakota and Cheyenne tribes. He later performed in Buffalo Bill’s Wild West Show before returning to Standing Rock in South Dakota. He was killed in a struggle between his supporters and the police in 1890.

The Theatre Arts Guild says “a variety of adult male and female actors is needed, with a mix of ethnicities, especially Native Americans. Applicants should prepare a song (bring sheet music) and a contemporary monologue. You also need a resume and a current photo.”

The production is directed by Lara Marsh, who has been a stage manager and director in the Omaha theater community for over a decade. The musical is written and produced by John Templin Schliesser. Find more information on the auditions here.

Apply to be a Hear Nebraska intern

We want to make Nebraska music internationally known, and we want your help.

Hear Nebraska is looking for enterprising, self-starting candidates for multimedia, editorial and marketing for positions beginning January 16, 2017. We are offering both paid and unpaid positions this semester, based on available funding. Apply for spring internships no later than Friday, December 16, 2016. Please email Hear Nebraska’s managing editor at andrews@hearnebraska.org with any questions.

Working both remotely and at either of our Omaha or Lincoln offices,  you will help us cover, promote and present the state’s music community for 15-20 hours/week.

For more information on becoming a Hear Nebraska intern, visit our application page.

Tonight, The Waiting Room hosts Mobilize Omaha!, a networking and support event for Omaha non-profits, featuring performances by Orenda Fink, Anna McClellan, Mesonjixx and many more. To read more about the event, see our interview with organizer Amber Barcel here.

Tomorrow, DSM5, Jump the Tiger and Mim Aparo play Brothers Lounge as a fundraiser for Toys for Tots. Admission is $5 or a toy. RSVP here.

On Sunday, Lupe Fiasco plays The Bourbon. The Grammy award-winning rapper will release his sixth studio album early next year. Tickets are $36 and available here.

For the weekend’s full slate of shows, see our events page.