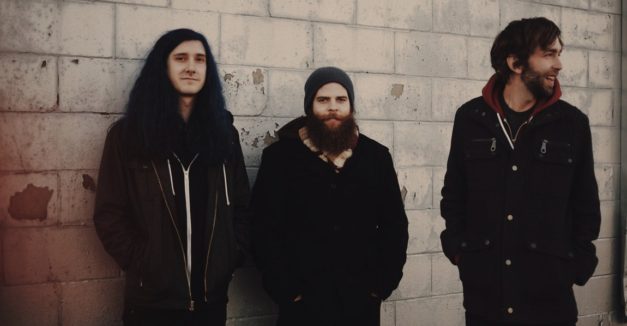 It has been perhaps the busiest year in Minneapolis pop punk trio The Crash Bandits’ four-year history. January brought the band’s second full-length album Lighten Up, which tackled the growing pains of jobs and relationships while fighting to stay upbeat. A small bit of touring here and there was highlighted by a pair of opening sets for Motion City Soundtrack’s farewell run. And this weekend, they’ll have more new music to share.

The Crash Bandits bring songs that EP, Procrastinator, to Milk Run tomorrow night with Bed Rest, No-Getter and The Way Out. The new album drops a day later but is available for listening via its Bandcamp page.

Here, you’ll find all the familiar cues of pop punk rolled into one: Matt Brown’s raspy yell and the band’s backing shouts, bouncing rhythms and lead lines reminiscent of The Pixies. It isn’t wonder Brown cites that band, Saves The Day and Jimmy Eat World amongst their influences.

Ahead of tomorrow night’s show, See Through Dresses’ Sara Bertuldo caught up with Brown via email on the thriving Minneapolis scene, The Crash Bandits’ connections to Omaha and the good and bad in 2016. Read on for the Q&A.

Sara Bertuldo: First off, how was your Thanksgiving? What did you eat?

Matt Brown: My Thanksgiving was pretty rad. Talk of politics were avoided, and large amounts of alcohol were consumed. I’m a vegetarian, and my sister is a vegan, so my mom (who is a total badass) made a completely vegan thanksgiving dinner for us, and it was delicious. My first time trying tofurkey, and it was not bad.

SB: What got you interested in music? Who are your main influences?

MB: I was lucky to be surrounded by family who were musicians and music teachers, so it was introduced at a young age for me. I switched off playing a ton of different instruments but ended up landing on guitar, because punk rock. Influences are weird because they always change for me. But I would say Pixies, Saves The Day and Jimmy Eat World would be a few that stick out for me. Kevin wanted me to add that his influences are the B-52s.

SB: Tell me about being a band in Minneapolis. Lots of musical history there. What’s the current music scene like?

MB: I love being in a band from Minneapolis. There is so much going on all the time, and the community is welcoming, diverse and filled with incredibly talented people. Tons of history here, all three of us are huge fans of Prince (RIP :(), The Replacements and Husker Du. I still geek out every time we get to play 7th St Entry inside First Avenue and see all the MPLS history that went through that venue. We’re a small city up north but everyone from MPLS is incredibly proud to be from here.

The music scene I feel like is always changing, I’ve seen it go through a few phases since joining about 8-9 years ago. Right now there is a huge hip-hop scene, which is fucking awesome, and so many of them rip. (Glow Mechanics, J Plaza, Rapper Hooks, Meta, Sean Anonymous for a few examples). On top of that Doomtree and Rhymesayers are a staple of Minneapolis that produce quality artists. There is also a pretty awesome punk/pop punk scene and a ton of indie/alt/shoegazey bands. Some of my favorites right now are Fury Things, Naive Sense, Person And The People, Ego Death, and Monica LaPlante. I’m not coming close to covering all the bases, but that’s what I’ve been dialed in on lately.

SB: What has Crash Bandits been up to since we last saw y’all in Omaha? What is your connection to this town?

MB: I think we were in Omaha last spring maybe? Since then, we have been busy writing songs and working on this release, Procrastinator. We got the opportunity to open up for two of our all time favorite Minneapolis bands over the summer. Small Towns Burn A Little Slower (broke up years ago, awesome band, look them up) got together for a benefit show that we opened up for. Then Motion City Soundtrack, one of my all time favorite bands in the world, broke up and Crash Bandits opened up their final two shows at Varsity Theater in MPLS. On top of that we have been apart of local bills and played a few out of town shows here and there.

All 3 of us have a deep connection with the city of Omaha. My and Nick’s old band (Skies Alive) and Kevin’s old band (The King And The Thief) played Omaha all the time years ago. One time my old band came down and stayed at a band called Get Down’s house for a week to get away and ‘write music’. We spent 7 days straight partying in Omaha and making friends who are still very close to us today, it was awesome. The first time I came to Omaha was in like 2008 and we played The Rock, I don’t think that’s around anymore. The Bandits have been here a few times too. Over the last like 2-3 years we’ve stopped in and played Reverb Lounge, O’Leavers, and Milk Run. You guys have a really cool scene here, and I’ve always liked the bands and artists the city has produced. Huge See Through Dresses fan over here :).

We’re really pumped to be here this time around for No Getter and Bed Rest’s release on Friday at Milk Run. Those guys are our buds. It’s going to be a really rad show for a really great cause.

SB: Who do you play as in Super Smash Bros.? Are you currently playing video games?

MB: Link. Link, every time, all day, everyday. Link in all versions of the game. I will rain a fire of arrows and bombs and send you flying with the the blade of evil’s bane. Link is badass.

I’m not playing any new video games at the moment, mostly because I don’t have a new system of any kind. I’m going to bring my DS on this string of shows and play PokemonX because I totally forgot I have that. Also my roommate just got his PS2 working and we just got tony hawk underground today… That game fucking rules.

SB: We’re hitting the end of 2016, what are your thoughts on the year? Any good moments/bad moments, albums of the year?

MB: To put it nicely. Fuck 2016. It was a mixture of good and bad, with the bad heavily outweighing the good. The ‘grab her by the pussy’ guy is going to be the next president of The United States of America, I don’t think I need to say anymore about that. We lost so many incredibly talented and influential people and artists. The entire city of Minneapolis shut down and mourned when Prince died. First Ave held a dance party until 7 am. I think I left it at like 5 am. On a more personal level, the three of us lost a very close friend over the summer as well.

The only thing that kept me sane the whole year was music. At the beginning of the year, we released Lighten Up, and now at the end of the year we are releasing Procrastinator. Two projects that I am very proud of being apart of.

2016 came out with a lot of really great music also. It was hip-hop that did it for me this year. Some of my top albums are Kendrick Lamar’s Untitled Unmastered, Chance The Rapper’s Coloring Book, and Tribe Called Quest’s We Got It From Here… Thank You 4 Your Service.  On top of those… David Bowie’s Blackstar and The Avalanche’s Wildflower.

SB: What do you hope to get for X-mas?

MB: If someone could just pay for all of my bills. That would be greeeaaaaat.

A congregation of Lincoln hip-hop gathered at Duffy’s Tavern last night for the third edition of rapper Sleep Sinatra’s Good Gospel series, which highlights local hip-hop artists. It is the first time Good Gospel has happened away from its initial home, the now-defunct DIY venue Church, closed in August.

Conny Franko, Ichibanhashface, Chris.Topher, Giest Corzain and M Shah performed, with a foreword by Sleep Sinatra. First-time HN contributor Alex Durrant was on hand to catch the action in photos. See them below:

Also tonight, Minneapolis indie rock band Victor Shores plays Milk Run, 1907 Leavenworth St, on a quick Midwest jaunt. The trio has a new EP, July’s You’ll Get Better At It, in tow. It might be due to vocalist David Soiseth’s announcing wail, or the heavy guitars and changing rhythms, but I hear a lot of Criteria in them. Locals on the bill include Super Ghost, Better Friend and This Machine Kills Vibes. 9 p.m., $5, all-ages, RSVP here.

Find a fuller listing of shows tonight and beyond at our statewide calendar here. Email news@hearnebraska.org with news tips, story ideas, shows and song submissions.