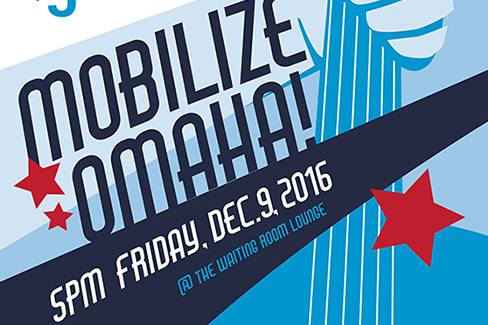 Mobilize Omaha! brings Omaha non-profits and artists together for a night of support

In the wake of last month’s national and state-level elections, Amber Barcel said she and many others felt compelled to take a more active role in supporting the state’s most vulnerable populations.

Barcel, who is involved with Planned Parenthood of the Heartland and several other Omaha non-profits, and five other Omaha women organized Mobilize Omaha! to help the community take advantage of that sense urgency. Tomorrow night at The Waiting Room, eight local musicians and 20 non-profits will gather to share information on volunteer and support opportunities around Omaha. The event is open to the public with a $5 suggested donation. All proceeds will be split among the organizations.

“We scheduled this event as soon as possible so people could capitalize on the momentum that was felt during the week of the election,” Barcel said over e-mail. “‘How can I help? Who can I help?’ We don’t want people to stop asking these questions, not tomorrow or a year from now.”

Mobilize Omaha! came together quickly, Barcel said, thanks to the cooperative nature of the Omaha non-profit world. The non-profits represented tomorrow night have all worked together on coalitions and boards, helped each other with outreach and shared resources. Barcel calls it a “beautiful sense of collaboration and responsibility we all share…to validate and address the intersectionalities of Omaha’s vulnerable populations.”

Beyond Mobilize Omaha!, Barcel recognizes myriad ways for Nebraska’s arts community to take an active role. Bands can volunteer for an organization and let their audience know why they chose to volunteer there. Artists can host winter clothing and feminine products drives at their shows. They can lead art projects for after school programs. Even mentioning favorite organizations during shows can have tangible results.

“Don’t underestimate how influential you are as a musician and artist in your community,” Barcel said.

The show, which will run March 2 through  March 5 at the Johnny Carson Theatre in Lincoln, is a post-punk musical about the events of Sitting Bull’s final years. Sitting Bull was a Hunkpapa Lakota holy man who led his people in active resistance against the United States government. He was a prominent leader in the Battle of Little Bighorn, in which George Custer and his cavalry were defeated by Lakota and Cheyenne tribes. He later performed in Buffalo Bill’s Wild West Show before returning to Standing Rock in South Dakota. He was killed in a struggle between his supporters and the police in 1890.

The Theatre Arts Guild says “a variety of adult male and female actors is needed, with a mix of ethnicities, especially Native Americans. Applicants should prepare a song (bring sheet music) and a contemporary monologue. You also need a resume and a current photo.”

The production is directed by Lara Marsh, who has been a stage manager and director in the Omaha theater community for over a decade. The musical is written and produced by John Templin Schliesser. Find more information on the auditions here.

For Omaha’s David Nance, the end of the year brings good tidings. Earlier this week, his album More Than Enough (Ba Da Bing, June), was named to the 28th spot in Noisey’s “100 Best Albums of 2016.” More Than Enough’s unflinching immediacy finds company in the lo-fi stylings of contemporary and sometimes-tour-mate Simon Joyner. In fact, Nance and company recorded his first full-band release at Joyner’s Omaha warehouse, the same place where Joyner cut Ghosts in 2012.

Noisey has this to say about the record:

“This may be dusty and emotive heartland rock ‘n’ roll, but it has more in common with the grimy lo-fi realism of Peter Laughner of Pere Ubu and Rocket From the Tombs than with any John Cougar/Jeff Tweedy sap. When Nance says that he’s spent countless hours absorbing the Stones’ Exile on Main Street and Jim Shepard’s Picking Through The Wreckage With a Stick, it’s easy to believe him.”

The list places More Than Enough between Jeffrey by Young Thug and Cashmere by Swet Shop Boys.

Tonight in Omaha, Oquoa plays Lookout Lounge with Hellrazor and Millions of Boys. The show is $8, all ages. In May, Oquoa released its second album, the six-track dream rock In Oneir on cassette. RSVP here.