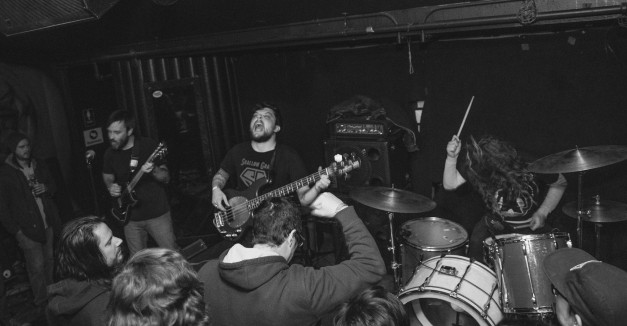 The radio landscape is vastly different today than it was in the late 1970’s. Commercial radio dominates the airwaves, playing popular music to drive ratings and ad revenue.

Community-based, online-only radio station RadiOmaha launches on Labor Day. Its aim is to provide a local forum for playing and discussing music underrepresented on commercial radio.

“Once upon a time radio was once an art form,” says co-founder Rick Galusha. “The folks at RadiOmaha want to try and recapture some of that joy, mystery, and sense of community that radio once provided.”

RadiOmaha will feature a mix of modern rock, local artists and cuts from as far back as the 1960s. The station will also include a roster of talk radio programs, with political talk shows from both the left and right, a Bellevue University sports program and an LGBTQ show. DJs include Marq Manner, Fred Ramzey, Ryan O’Connor and many more, plus a rotating cast of guest hosts.

Galusha formed RadiOmaha with some long time radio friends from college and from 20 years as the president of Homer’s. He says that though RadiOmaha will be a work in progress, its programmers are passionate music fans that will help develop the station as it gains footing.

“Omaha’s radio landscape is filled by professionals, many of whom we respect and admire,” Galusha says. “We can’t and won’t compete with them; the economics and technology are against us. Instead we simply want to provide a rich listening experience that is fully invested in exploring and sharing music.”

With programmer-dictated content from all over the musical and political spectrum, RadiOmaha bears kinship with other outlets like Lincoln’s KZUM. With podcasts and live radio streaming as forerunners, a kind of roadmap exists, and it’ll be interesting to see where it leads.

The trio of songs, self-produced and mastered by Christopher Johnson, is Halfwit’s first batch of new music since releasing a four-song set in April. The new material fits right in with the Halfwit catalogue, with pounding percussion, heavy riffs and frontman Dan Jenkins monotone, washed-out mic delivery.

Halfwit will play upcoming Lincoln Calling, its first live appearance since the beginning of the year. For now, hear the band’s latest below.

Saturday’s show will be Anonymous Henchman’s last for the foreseeable future, according to Lorence. Shea moved to California recently to pursue sound engineering work, while Lorence deploys with the Nebraska Air National Guard this fall.

Still, Lorence says they plan to continue writing new material for next summer.

“We are trying out an exotica lounge/space age bachelor pad song at the show,” Lorence says. “If it goes well we might write a couple more.”

In advance of the show — where Anonymous Henchman will be joined by The Sub-Vectors and Huge Fucking Waves (RSVP here) — hear “Surfside Flash” below, written by Travis Sing of Township & Range/The Electroliners/Whipkey Three.

“He gave it to us so it could have a life he could never give it because it doesn’t fit well with any of his projects,” Lorence says. “It is named after the Surfside Club in Omaha and the antics of boaters passing you by at the restaurant.”

Rounding out a big day for new music, Laughing Falcon has released another track from its forthcoming album Sonic Possession.

“In The Darkness” is a blistering, classic-rock influenced track, featuring Kevin Chasek’s reverberating wail and a trio of searing solos from lead guitarist Matt Kaminski. Earlier in the week, Laughing Falcon premiered “Getting Somewhere,” a similarly loud, mind-bending rock anthem.

Tonight, the band plays The Bourbon with longtime Georgia rock outfit Jackyl and A Different Breed. Jackyl released its self-titled debut album in 1992 and has steamrolled the touring circuit ever since, earning the moniker “The Hardest Working Band In Rock ‘N’ Roll” after once playing 100 shows in 50 days.

Chasek says that although it isn’t a proper release show, copies of the new album will be available tomorrow. In advance, hear both “In The Darkness” and “Getting Somewhere” below:

It’s going to be a packed weekend of shows, with seemingly impossible choices to make. We’ll try to help with some of the highlights.

Tonight, Benson First Friday Femme Fest will take over the main-drag of the Omaha neighborhood with 44 bands at seven venues. As has been noted, all bands contain at least one woman member, a demonstration of a scene flush with talented women. Read our preview of the event here, which features the entire schedule and a sneak peek at some of the lesser-known acts. RSVP here.

Also tonight, the ninth-annual Jake’s Block Party kicks off at 6 p.m. with a night of Omaha music and a local beer garden. Brad Hoshaw leads the live music at 6 p.m., followed by High Up, Montee Men, M34n Str33t and Twinsmith. High Up is the new project of Christine and Orenda Fink, GG Elsasser, Josh Soto, Eric Ohlsson and Jason Biggers, and which just recently spent recording time at ARC Studios. Montee Men is the sludge rock trio of John Laughlin, Chris Kelley and Desaparecidos’ Matt Baum. RSVP to the block party here.

Comedy and music festival Mid By Midwest starts tonight at O’Leaver’s and runs all weekend long. Branded cheekily as the DIY alternative to the similarly titled Austin, Texas, festival, it will feature bands from Omaha and Denver, as well as comedians from all over the country. We previewed the weekend yesterday, along with a brief email exchange with curator and Crom Comedy Festival founder Ian Douglas Terry. RSVP to the event here.

As always, head to our statewide calendar at hearnebraska.org/events for a fuller listing of  this weekend’s shows. If you do not see your show or one you plan to attend, email us at news@hearnebraska.org, or add it yourself. And keep those song submissions, story ideas and news tips coming.