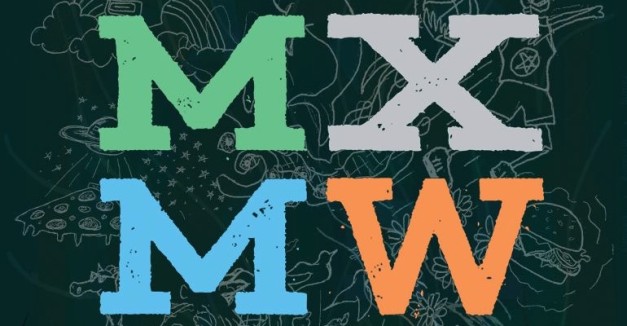 You know how you’re always thinking “I wish Hear Nebraska would do this”? (At least, we hope you think about that.) Now is a great time to tell us. As we approach our fifth anniversary as an organization, we’re focusing harder than ever on being strategic and effective in everything we do.

Please help us do that: Take three minutes to answer a few survey questions to help Hear Nebraska do a better job cultivating Nebraska’s music community.

We want the good, the bad, the confusing. Tell us what you like, what you don’t like and what you want to see more of. Lay it to us straight, and please ask your friends who care about Nebraska music to do the same. Thanks in advance.

All this weekend, O’Leaver’s will host the inaugural Mid By Midwest, a stand-up comedy and live music festival bringing together local bands and comedians with national performers.

Ever at the intersection of comedy and music, Crom Comedy Festival’s Ian Douglas Terry curated the three-day festival. He and fellow Omaha ex-pat, now Chicago resident Zach Peterson hatched the idea in the midst of a brief bout of homesickness for Omaha music and comedy scenes.

“We were getting stressed out about our respective workloads,” Terry says. “Having a fun weekend in Omaha that didn’t have as much pressure, where we could bring in comics we love and get bands we love to play seemed like a nice way to end the summer.”

Due to Terry’s and Peterson’s networking through Crom Comedy and Chicago’s Comedy Exposition, respectively, Terry says that assembling a roster of crack comedians was the easy part. The lineup features some heavy-hitting comedic acts, including Los Angeles comic Eric Dadourian, Ben Kronberg and The Whitest Kids U Know’s Timmy Williams.

Terry used Nebraska connections to book Thirst Things First and a reunited The Cuterthans — along with Denver bands Dirty Few, Rootbeer and Mermantau, and Bud Bronson & The Good Timers — to fill out the music side.

Mid by Midwest also plays, in Terry’s mind, as a lower-key, tongue-in-cheek dig at the Austin festival of the same kind and similar moniker.

“I’m a huge fan of creating DIY and accessible content so doing something purely DIY and fun as a parody of something that is an expensive cell phone commercial festival seemed like a very punk rock thing to do,” Terry says.

Most of all, Mid By Midwest presents an opportunity to highlight what Omaha’s under-the-radar DIY comedy scene. Terry says that the scene’s relaxed inclusiveness will shine this weekend.

“The shows are all going to be super funny and not like anything you’ve seen and I’m proud of the diversity we’re bringing in to entertain people,” Terry says. “No one will harass you for being in the audience and no one will force you to buy a certain amount of drinks or shitty chicken fingers.”

Shows start at 8 p.m. Friday, 4 p.m. Saturday and Sunday, and are $7 per day. RSVP here where you can view the full schedule and list of performers.

Omaha garage rock outfit Eric In Outerspace releases new two-song EP Wooden today. It’s the follow up to March EP Backseat Surfin’, which at the time was the band’s first release in 18 months.

The band recorded Wooden in late June at ARC Studios with Pageturners/Sofar Sounds engineer Adam Roberts. Eric In Outerspace frontman Sean Paul says that Roberts’s asked them to record there after ARC boss Mike Mogis granted him his own session.

Paul says that it wasn’t necessarily a planned release. The Omaha quartet self-produced its prior two recordings, and jumped at the chance to track in a more formal setting.

“Although we are slowly getting better at recording and mixing ourselves — emphasis on very slowly — we thought it was a no-brainer to do the ARC session,” Paul says.

While there’s a noticeable upgrade in recording quality with these songs, Eric In Outerspace maintains it’s fuzzy, frayed-edged garage sound. “Trailing Away” hums along for the first third, introduces a few blaring guitar leads, and dips back down again before giving way to a heavy outro. “High Time” bears the band’s signature penchant for exploding breakdowns.

“The two songs are unintentionally pretty different in style and both are a little different than some things we’ve put out in the past,” Paul says. “We kinda wanted to see how things would sound with a heavier trio of guitars and just some straight forward rock songs.”

Along with two releases, Eric In Outerspace — the quartet of Paul, drummer Ryan Tvrdy, bassist Michael Laughlin and lead guitarist Ross Negrete — has been playing frequently over the last year, including last week’s show with a pair of national touring acts Beach Slang and fellow Omahans See Through Dresses. The band plays this Saturday at Sweatshop Gallery with Los Angeles garage pop rocker Colleen Green and Omaha’s Millions Of Boys (RSVP here).

Hear Wooden below in its entirety: 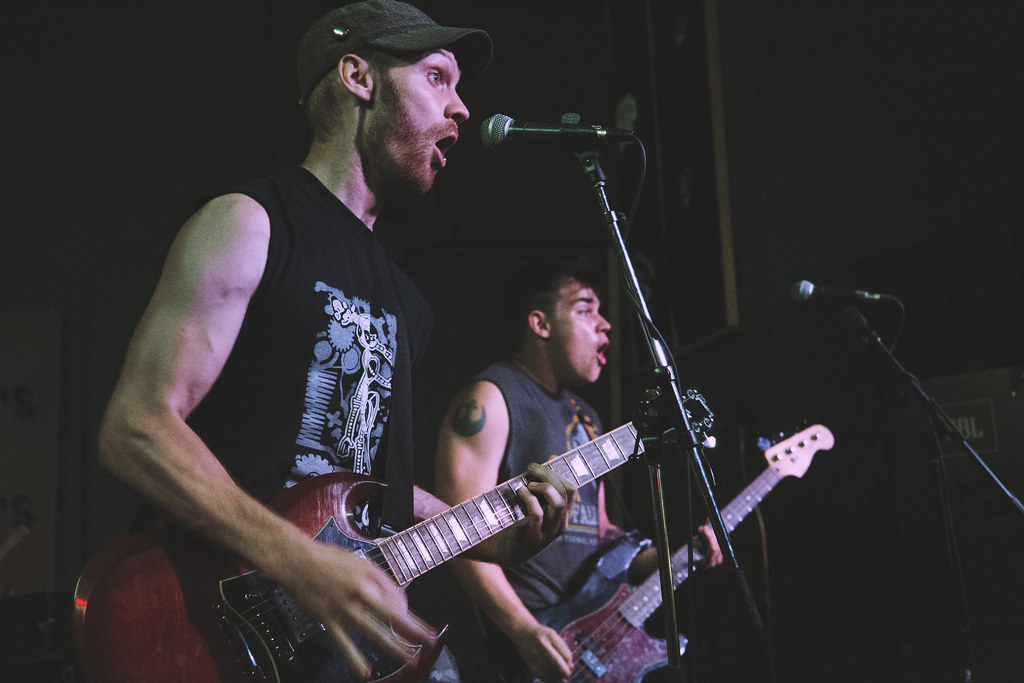 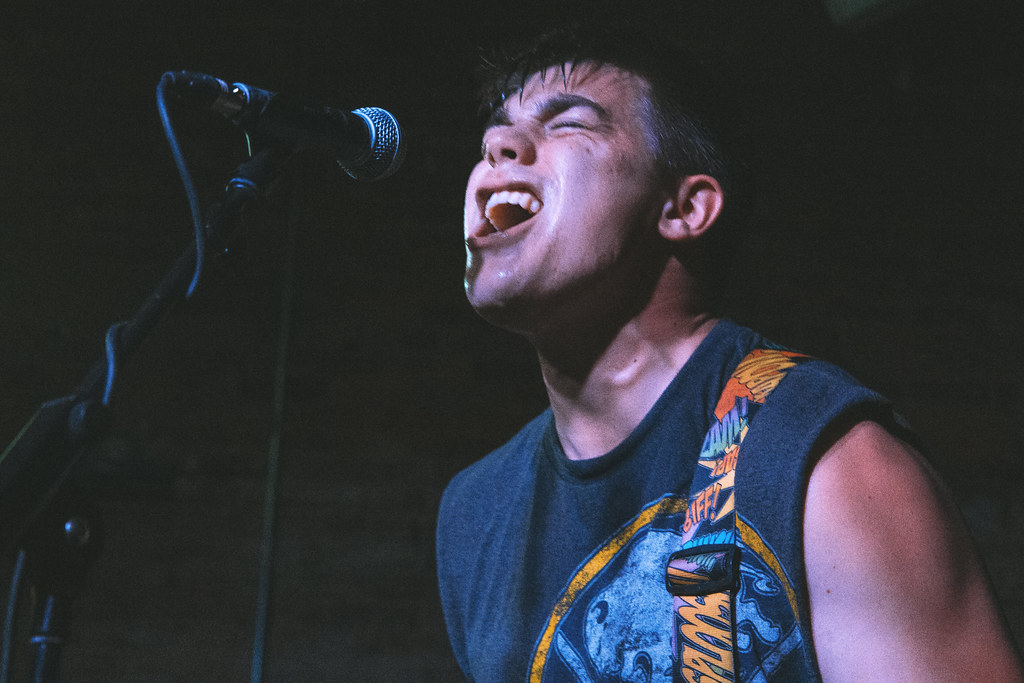 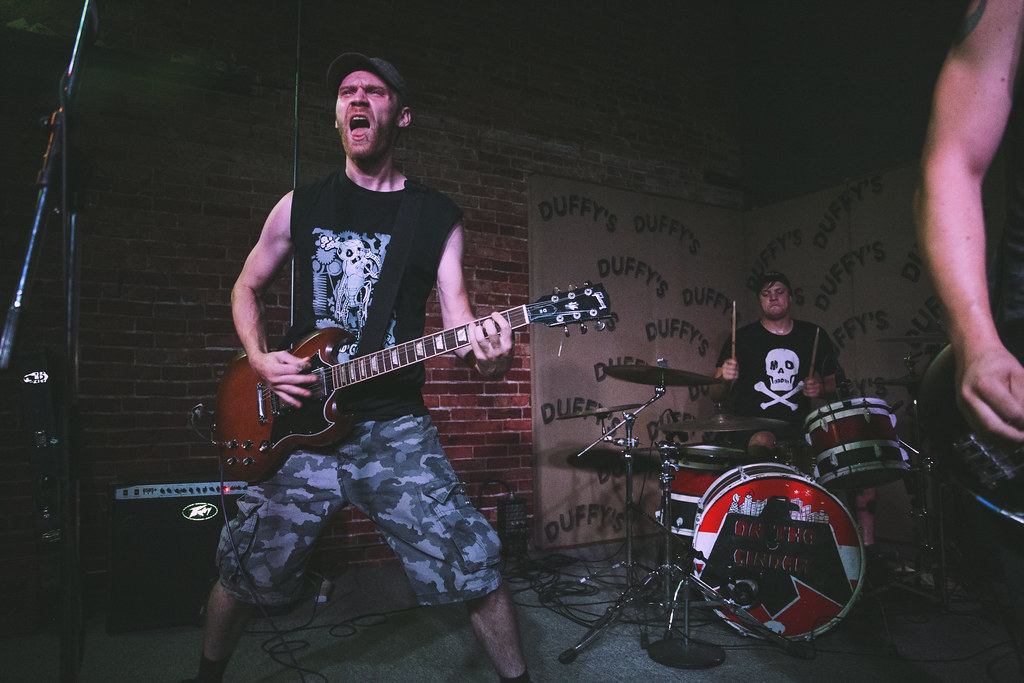 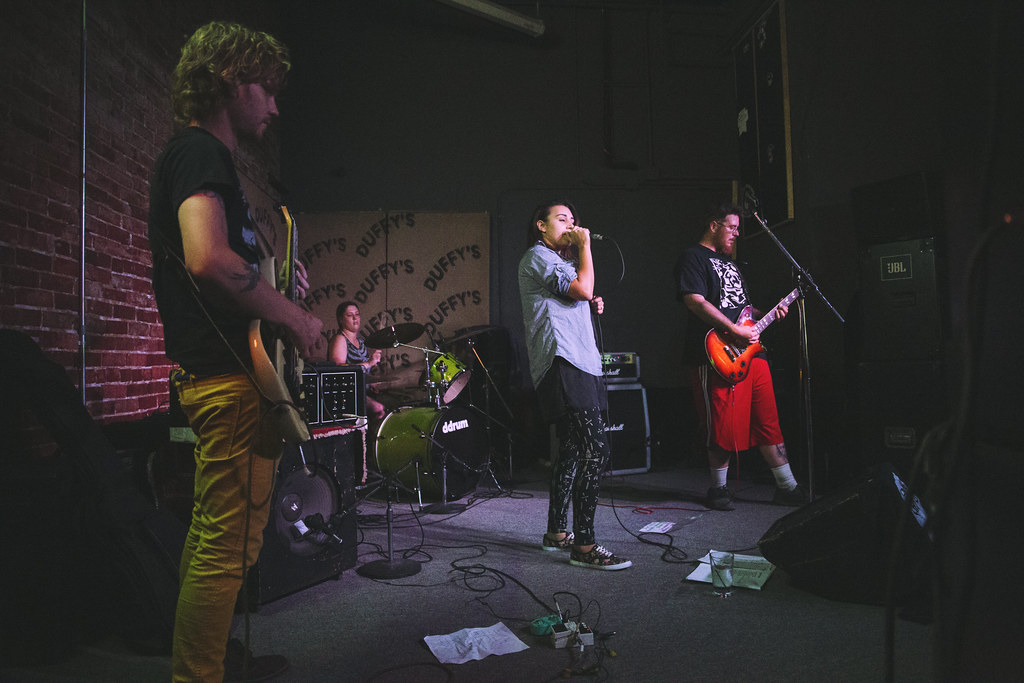 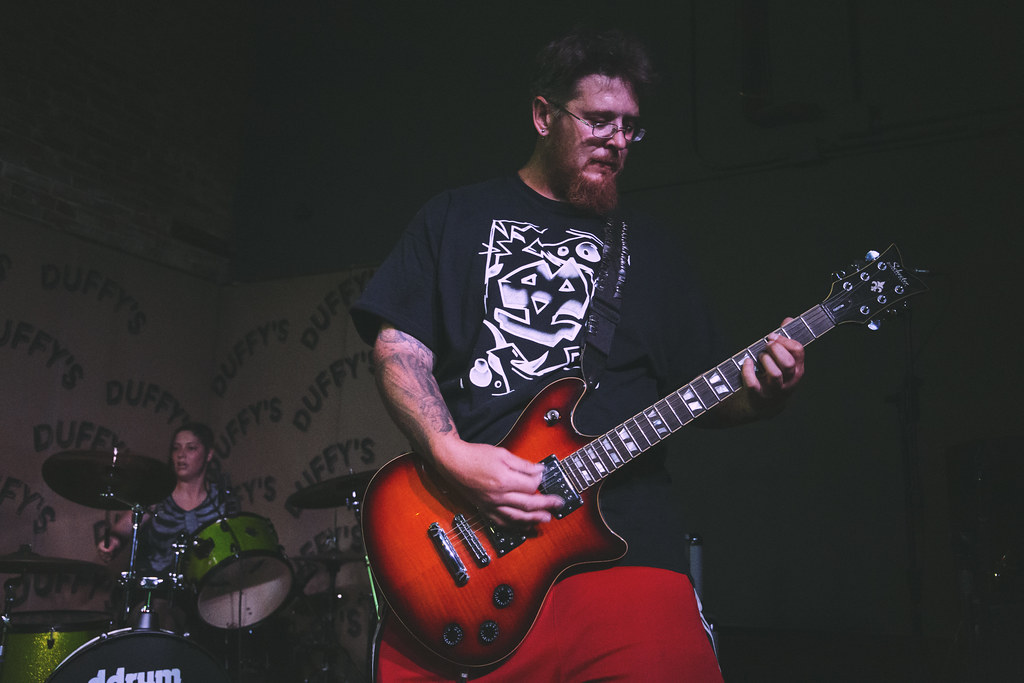 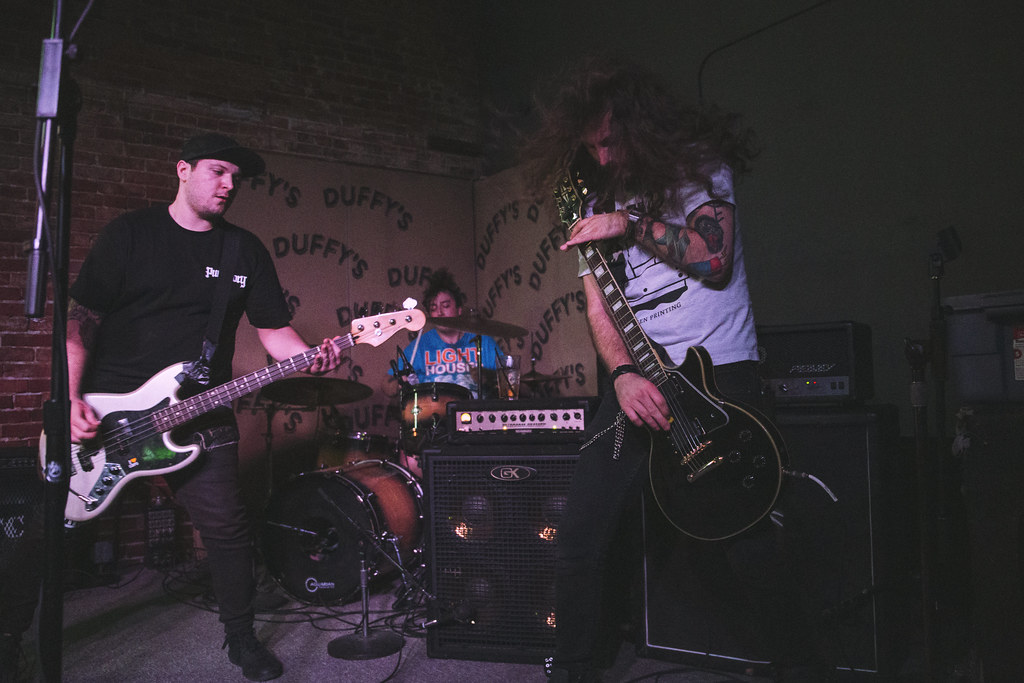 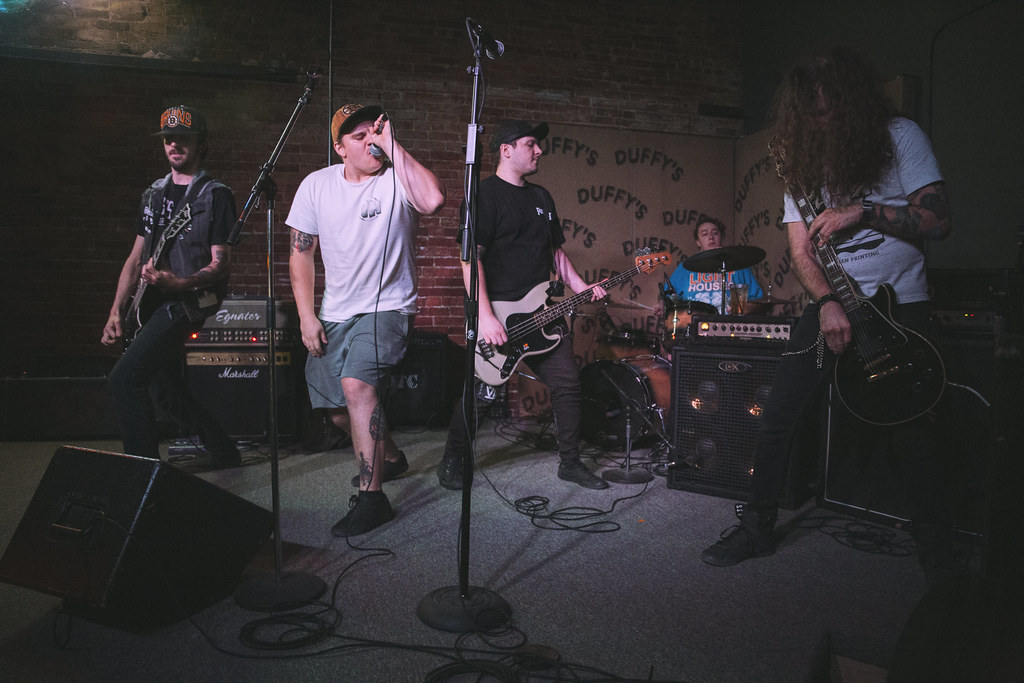 Oft-busy HN contributor James Dean stopped by Zoo Bar last night to catch The Claudettes. The Chicago pop/ragtime/bar-band trio is in the midst of a nationwide tour, during which their latest LP No Hotel will release on Sept. 18. With their blues-inspired sound, the band must have felt right at home at Zoo Bar. View Dean’s photos below: 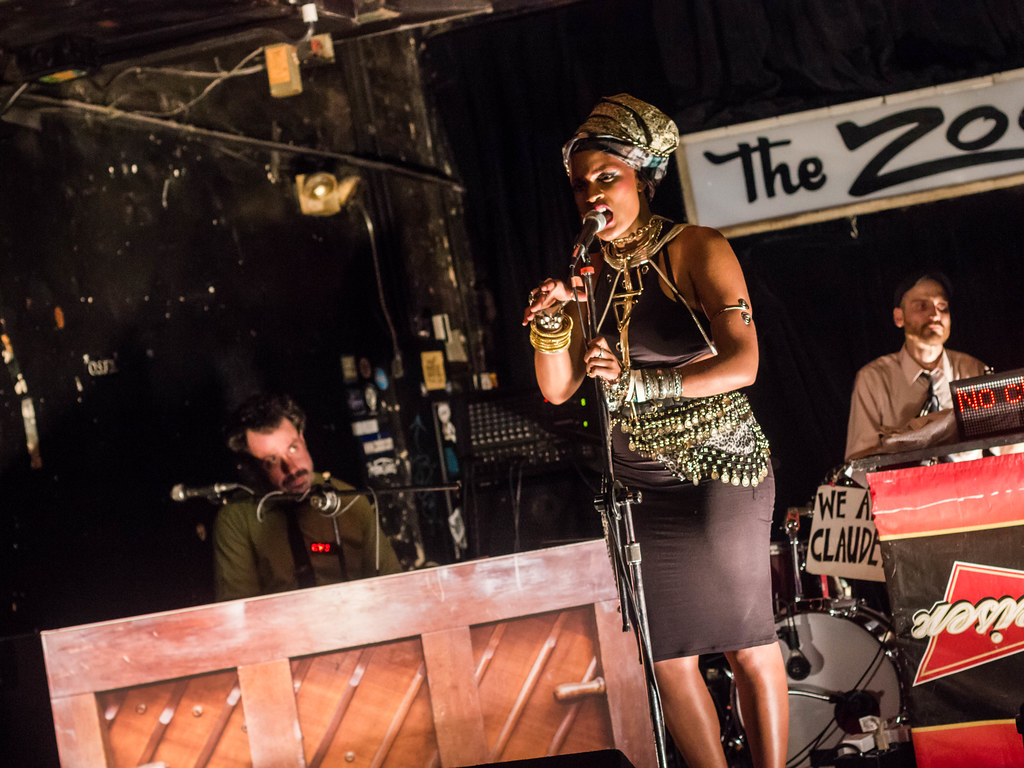 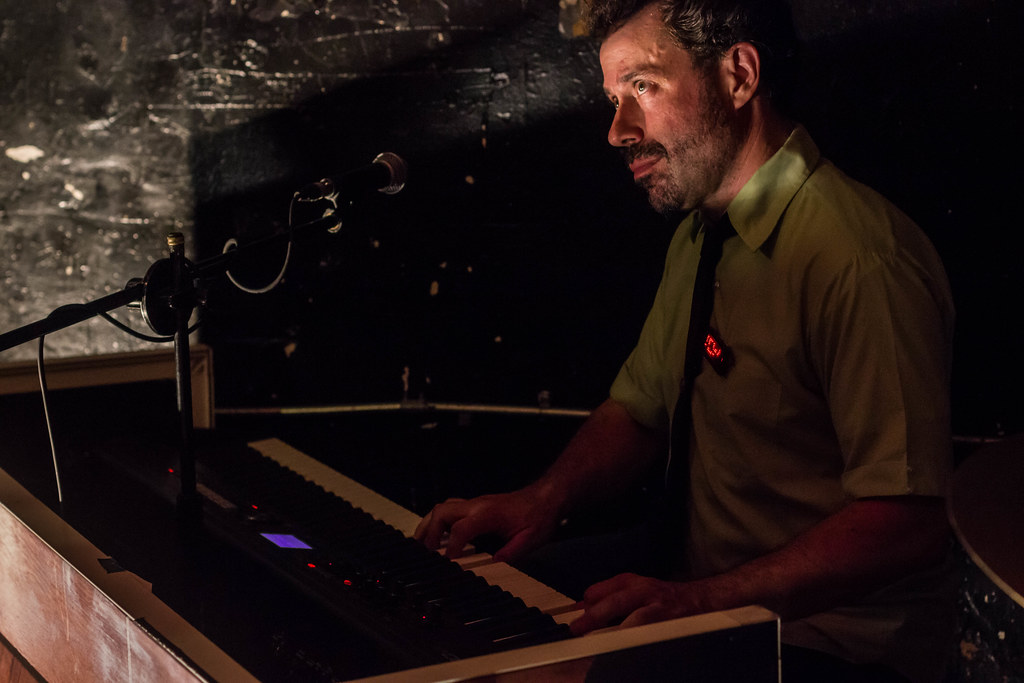 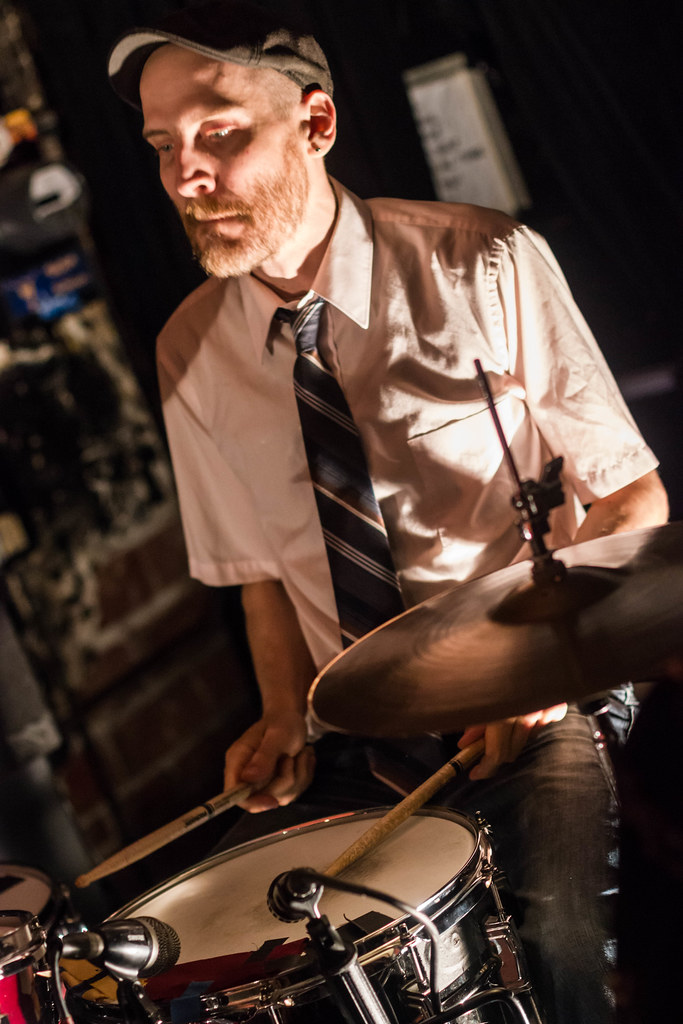 Tonight, Omaha’s Rock Paper Dynamite plays the first show of their month-long residency at O’Leaver’s. The hard-rocking quartet released its sixth EP, Teeth, Aug. 8. A few days before, we published a Q&A with RPD frontman Joseph Janousek about distilling the best available songs into an EP, performing in front of small crowds and writing the EP’s lead track “The Devil.” Fellow Omaha bands Dr. Gnarwahl and Two Drag Club fill out the billing. RSVP to the 9 p.m. show here.

As always, head to our statewide calendar at hearnebraska.org/events for a fuller listing of shows — including early 2000’s rock radio mainstay Trapt with Lincoln’s Freakabout tonight at Vega (RSVP here). If you do not see your show or one you plan to attend, email us at news@hearnebraska.org, or add it yourself. And keep those song submissions, story ideas and news tips coming.