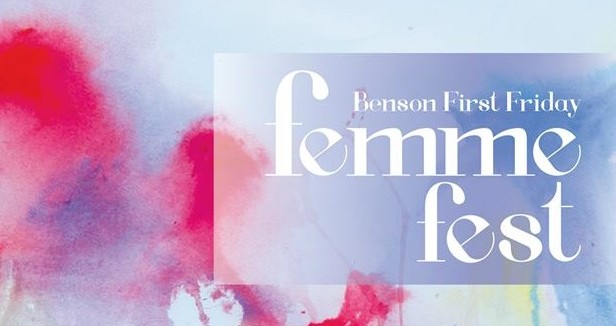 I’ve been holed up at Aroma’s Coffehouse in Benson for the last two, maybe three weeks. It’s so I can focus on doing one of the decidedly more important things I’ve done in my adult life (y’know, instead of letting distractions–like laundry–knock me off my game).

I texted Jim at 1% Productions on a lark. I was plotting out my summer, and it hadn’t really begun to shape up yet, so I thought I’d give it a try: Pick a random weekend–maybe a First Friday. See if Reverb Lounge and The Waiting Room in Benson were available the same night (they were). I asked if I could book both rooms for a “lady festival.” I was given the go-ahead. I rounded up Emily Cox of E3 Music Management, Shannon Claire of X-Rated: Women In Music, Alex Jochim and Jamie Hardy of Benson First Friday and Hear Nebraska’s own Angie Norman for help. I had flippantly begun to book a festival, and like a tiny pebble rolling down a snowy hill, it had begun to gather speed and weight.

And as cocky as it sounds, it came together exactly like I hoped it would. I put out a call for submissions, wholly confident that there were enough women in Omaha and Lincoln, playing in a band, that I would be able to fill out a handful of venues. I put out a call for volunteers as a formality, but from the moment I mentioned I’d be putting on this festival, most of them had all already come out of the woodwork. The folks you’ll see posted at the doors of these venues offered their assistance in any way I could use them.

There’s a part of this that, I’m sure, sounds like Icarus flying too close to the sun. But let me tell you why I am so confident in making Femme Fest happen — this Friday, Sept 4 (RSVP here) — without regard to whatever traditional means of putting together a festival.

The women in our creative community have been crying out for a gathering of our own–or at the very least, for inclusion. You could find it in the fevered pitch fit that we threw in those few years Maha was gathering their wits and learning how to be a more inclusive festival. You could find it in the organizing of Omaha Girls Rock (and in the more recent vocalizing of the desire to put together a Lincoln Girls Rock). You could find it in the content and purpose of the bands and music we’d begun to put together–in The Mynabirds’ “Generals,” in the creation and mission of Manic Pixie Dream Girls, in the jokes and feminist rants of the Badland Girls. You could find it in our outspoken desire to include diversity in the content here at Hear Nebraska. And things have gotten better for us, yes, but the desire for something to put our fingerprint on is very real, and now, thanks to Femme Fest, very tangible.

I’ve been holed up at Aroma’s Coffeehouse in Benson, because I am organizing and scheduling, yes, but more so because I am trying to focus the rallying cry.

I hope you’ll join us.

In anticipation of this most badass event, I wanted to give you a heads up on some bands who haven’t really been covered in Hear Nebraska yet, and should definitely get your attention this Friday night.

These Omaha music veterans will be debuting their newest project on The Waiting Room stage. The rock quintet includes members of such previous projects as Lullabye for the Working Class, Surfer Rosa, and Goodbye Sunday.

The Ronnys are a rock band from Omaha, NE featuring the songwriting of Veronica Bautista. Inspired by Vero’s love of all things rock, The Ronnys’ sound is heavy with clever guitar riffs and reminds me of a less punk, but more pop rock Josie and the Pussycats (yes, the 2001 movie version, don’t pretend like you didn’t own the soundtrack, too). Fresh off the release of their I Like Your Dirty Guitar EP, this will be their last appearance for the year.

The Badland Girls are a musical comedy duo from Omaha, NE featuring Rhea Dowhower and Destiny Sturdivant. They started performing live musical comedy shortly after the launch of their eponymous “junk culture conversation” podcast in January 2012. They’ve performed their funny spooky filth songs & sketches in shows with OK Party Comedy, The Backline Improv Theater, and The Florentine Players. The Badland Girls are heavily influenced by horror, John Waters, intersectional feminism, and those tough girls you were too intimidated to hang out with in junior high.

Big AL Band is a rock duo from Omaha, NE featuring Big AL and Holly Pop. Self-proclaimed as “Omaha’s most notorious 2 piece band,” they promise to bring the rock, and I can assure you they will. Their brand of loud and riotous experimental metal–often instrumental and sometimes lyric-based–is peppered with humor (check out Great White Shark–a personal favorite), innuendo, and heavy dose of rock’n’roll. Check this: Big AL has always played as a duo with a woman in the band. Usually a bass player. However, when Holly Pop agreed to play, just a little over three years ago, she did so only on the basis that she would be the drummer. She learned drums specifically to become part of the Big AL Band. Badass.

Katlyn Conroy is not a native of Nebraska, although she might as well be. Adopted to Omaha while still part of Lawrence, KS band, Cowboy Indian Bear, Katlyn’s solo project is a jewel. Her voice is dynamic–whispering then soaring in the same breath, her performance is raw and unfettered, and her songwriting is unmatched. I am overjoyed she agreed to come on up and see us!

Pancho & the Contraband is a seven-piece band that is borderline Jimmy Buffet–but for a new generation. The band provides laid back tunes with a little more spark, and are definitely a staple of the Omaha party crowd. The horn section will keep you on your feet and the rhythm section will keep your booty shakin.’ They’re a fun way to end any night. Every night, maybe.

The members of Minutes to Miles have been part of the Omaha music scene for more than 20 years, playing in such bands as Petalfast, Red Number 9, 3rd and Delaware, The Darktown House Band, The Clincher, and Nightbird (to name a few). Sisters Roselle and Renee’ Ledesma formed the band in 2013, along with friends Jeff Harder and Nikki Sweigard, as a chance to finally play in a band together. They play a combination of covers and originals. I would highly suggest bugging them until they play their cover of Portishead’s “Glory Box.” Sweigard plays the crap out of that guitar solo.

Mary Ruth McLeay is one of the youngest performers added to the Femme Fest bill, and one of the performances I am most highly anticipating. At only 14 years old, she has been seriously writing songs for two years now, and playing open mics regularly. I ran into her at the “Once” Omaha Performing Arts Songwriting Competition Showcase where she’d made the top 10 of her age group. She blew the audience away with a harder rocking song called “The Guest.” I made sure to go introduce myself to Mary Ruth and her mother right away. I highly suggest you make your way to The Pizza Shoppe for this performance.

Omaha musician Rebecca Smith is unassuming as the backup vocalist for Blue Bird, but shines as Bell Mine. Reminiscent of Bjork with her layered, hissing and popping beats and builds, her voice is a soft and dreamy contrast. Do. Not. Miss.

DJ P2K is the only DJ playing Femme Fest. She hails from North Omaha and has been DJing for over 9 years. She’s made a name for herself around the metro area with radio appearances, sets in bars, clubs, and concert halls, and by creating quality mixtapes with great musicality a great understanding of rhythm. Come to her set prepared to sweat.

American Pinup emerged from the suburban sprawl of Westchester County, New York in 2010 to offer a rousing blend of punk rock and powerpop with seasoned songwriting at its core. Thoughtfully arranged compositions and lyrical depth bolster the band’s radio-ready, exuberant indie rock sound. Fronted by Lauren West, who unites sultry, melodic crooning with a raspy, rock and roll growl, the band draws on influences from across the spectrum of alternative music, creating an explosive mixture of pop-savvy melody and punk rock attitude. The result is the perfect marriage of hook and edge.