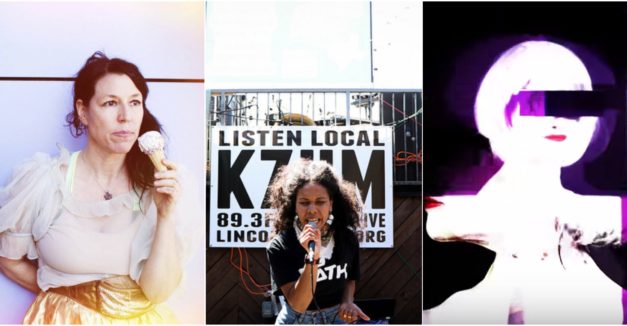 Amidst the waves of guitars and echoing oh-ohs, Shana Falana’s “Cool Kids” bears a message. It’s the same one she would tell her younger, more conflicted self.

“Don’t look at yourself in the mirror so much, make more art, and don’t worry about pleasing other people, just find your people and explore yourself,” Falana says.

The psych-pop artist explores themes of youth, loss and redemption throughout her latest album Here Comes The Wave. Out October 2016 on Team Love Records, it features Falana’s taste for entrancing drone rhythms and vast oceans reverb.

But it also tells the story of her history: fighting addiction, recovering from the unexpected and emerging from her past. Her own personal successes translate to an infectious spiritual positivity, heard in her songs and felt during her cathartic live performances.

Before stops in Omaha and Lincoln next week, Falana caught up with See Through Dresses’ Sara Bertuldo to chat about the band’s Team Love connections, her extended pre-tour routine and her unorthodox ice cream order (hello Ted & Wally’s). Read on for their conversation.

Sara Bertuldo: First off, how are you? You’re just about to leave for tour. How do you prepare? Are you a careful planner or do you pack minutes before you leave?

Shana Falana: Hi Sara! I’m good, we were supposed to leave for tour today but we’re stuck in this NY blizzard, almost have two feet of snow! So looking like a 12 hour drive to our Chicago show tomorrow is what’s happening. HOPEFULLY! Our tour van is buried up to the hood and no plow guy yet!

I have the van loaded up, Mike just waded through the snow to get our “tour half and half” out of the cooler in the van… I bring so much food for us on tour, I make sandwiches and french press coffee! Thankfully we have a girl coming up from the city to rent our place for three weeks and will water my jungle of plants. So I just cleaned my entire house. I am a total planner, it’s crazy, I get ready weeks before in little ways, if I don’t I will get sick the first day of tour from stress, that’s what I’ve learned! I pack last, Mike and I live out of our toiletry bags and suitcases alot these days so we got that down.

SB: What got you interested in music? What was your first instrument? Who plays with you in this project?

SF: I got interested in music back in the 90’s in San Francisco. I was surrounded by an amazing DIY scene in the Mission District. BJM were apart of it, Miranda July, and so many others. It was easy to just jump in. My first guitar was the one I’m still playing now, my red SG (covered in so many stickers), I’ve had that and my Ampeg Gemini 1 for so many years now! I’m thinking I shouldn’t keep touring with them just in case we ever get robbed on tour. I would die if I lost my buddies! Mike Amari is my drummer and partner. It’s just the two of us and backing tracks and film.

SB: You’ve recently released your second album, Here Comes the Waves, on Team Love. How did you get involved with the label? What was the songwriting/recording process like?

SF: Team Love Records! They’re originally Omaha based YAY! Conor Oberst and Nate Krenkel (my guy is Nate) started it back in the day, now Nate manages Conor and runs the label from NY. He put out a compilation record a bunch of years ago with a few locals on it, me included, and that began our relationship. When we came back from our EU tour a little over two years ago I told him I really needed to get on a label to further my career and he said yes! The recording has been a breeze because we work with D. James Goodwin (Kevin Morby, Whitney, Bob Weir). He’s local to us in Woodstock, N.Y., easiest person I’ve ever made records with so we just keep working with him. All the songs were already written from when I lived in Brooklyn from 2003-2008, except for “Cool Kids,” that’s a new one!

SB: “Cool Kids” is a great song! I feel like a lot of people can identify with the lyrics, everyone has had that phase or is currently in it. In the time travel universe, what’s some advice you would give to your teenage self?

SF: Yay! I’m glad you like Cool Kids, it’s my anthem! Teenage self? Ugh … don’t look at yourself in the mirror so much, make more art, and don’t worry about pleasing other people, just find your people and explore yourself.

SB: You mentioned playing Omaha before! What was your experience like? Good/bad?

SF: Awwww…. Omaha was the first show booked on our very first tour! We played this awesome show with this amazing band Love Technicians and had a really good experience. Very friendly-sweet night.

SB: You are eating ice cream in one of your press photos. The best ice cream in town is at Ted & Wally’s which is a minute walk from the Waiting Room! What’s your favorite flavor?

SF: Hahaha! Mike is gonna be so excited about this! MY FAVORITE FLAVOR? Well … if we’re talking plane ole ice cream flavors, mint chip, but if I have some serious options, I love indian spiced flavored ice cream like turmeric or sesame!

SB: What’s next for you after these tours?

SF: Right! Tours, plural. Well we should be all done with touring in the beginning of May, and *exciting news* we just signed with Xray Touring over in the EU (to give you an idea, they book PJ Harvey, The Breeders, Dead Can Dance, BJM to name a few). They are sending us over there in Fall 2017 and Spring 2018. That’s a big game changer for us, so we are going to have to record a new song for them to premiere and possibly make a video. PS I pay for all this stuff myself, like everything. We got licensing placements last year, and I was able to make my money back on our first record Set Your Lightning Fire Free. But I work my ass off for every single little thing, so getting a nice big push right now, I’m just beyond the moon. Wish us luck!

For a second straight year, the Nebraska Exposed showcase at SXSW brought nine of the state’s best musical acts (and one comedia) to the Cheers Shot Bar, right in the center of the Austin, Texas festival. KZUM photog Shannon Claire and Laughing Falcon’s Kyle Gibson were on hand to capture the event, sharing a few photos below. The Lincoln community radio station hosted Nebraska Exposed and featured coverage yesterday on its website.

Check out their photos below:

Glow In The Dark debuts electronic project with new video

InDreama’s Aaron Gum and Jump The Tiger’s Lawrence Deal have worked together before on videos for Deal’s band. Their collaborations now extend into the musical realm.

Their synth/new-wave project Glow In The Dark has shared its first track and video “Digital Lust.” Synthesizers burn and bloop and Lawrence Deal’s vocals are like another instrument, befitting of mid-2000s pop.

Whether you know Gum as a filmmaker or not, you might be familiar with his work. He’s directed videos for the likes of The Faint, Orenda Fink and Vital Organs. The “Digital Lust” video builds on themes of degradation while depicting scenes of religious fervor.

Headlessness is an exercise in pop orchestration, as Salem combines cascading synths and vocal effects with electronic percussion and glistening guitar work. The result is an earnest, intimate batch of bedroom synthwave tracks.

In a process he describes as “painful,” Salem performed, recorded and mixed the songs at home, sending them to ex-Pedro The Lion member TW Walsh, whose musical taste he says he admires. Walsh mastered albums by the likes of Sufjan Stevens, Ben Gibbard and The Shins.

“I figured if anyone was capable of polishing my amateur bedroom mixes, it was him,” Salem says.

Headlessness has not yet secured any live performances, with Salem saying he enjoys digging into the production side at the moment. While Salem describes this most recent process as “painful,” it was a learning experience, one he’s eager to build upon.

“I didn’t really know much about what I was doing technical-wise and still don’t, but I think it turned out alright,” Salem says.

Listen to Headlessness below:

One big festival, a major shot of nostalgia and pair of album release shows highlight the weekend. Our picks are below. View a fuller listing at our statewide calendar here and email us at news@hearnebraska.org with any news tips, story ideas or upcoming shows.

Tonight, We’re Trying Records brings the inaugural House Fest to Omaha house show venue Lucy’s Pub, mixing Nebraska bands with others from around the Midwest, in part, to foster connections between the two. Label founder Jordan Hiebner (a former HN marketing staffer) and Lucy’s Pub operator David McInnis talked about that and more for a story that ran yesterday; read it here. Proceeds from the $5 door will be donated to Planned Parenthood of the Heartland. Find the full schedule of bands and RSVP here.

Before tomorrow night’s Corey Feldman show (seriously, you have to see this Today Show video, if you haven’t), Digital Leather returns to the live stage with a warmup at Blackstone Meatball. The synth-punk band’s last show was more than a year go, though frontman Shawn Foree has been releasing music via Bandcamp in the meantime. Most recently, that’s seven-song EP INFINITE SUN, which dropped on January 12; listen here. Cult Play and Chalant also perform. 8 p.m., RSVP here.

Nebraska-native folk duo The Talbott Brothers return home to play Vega in celebration of the duo’s third full-length album Gray. Its lead single “Wanderer” is indicative of a larger shift for the Talbotts, who focus on change and the various places in which one can find home. Read more here. Lincoln songwriter Evan Bartels opens the show. 8 p.m, $12 advance/$15 day-of, all-ages RSVP here.

Downtown, Lincoln chamber pop band Floating Opera celebrates the release of its latest album Pop Song On The Elevator Down at 1867 Bar. Out in late January on Tremulant Records, it hits refresh on the band’s classic orchestral pop sound. This marks its first release since 2009 and fifth total. Tragic Jack and The Renfields open the show. 8 p.m., $5, 21-plus, RSVP here.