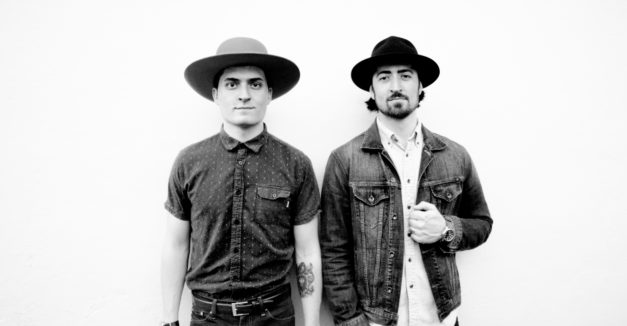 Many of the characters in a Talbott Brothers song are, like the duo itself, on the move. Whether running from some prior life, searching for new meaning or both, there is some sense of inner purpose, even if it is obscured by doubt or pain.

While the Nebraska-native folk group continues its exploration in “Wanderer” — which premieres today via HN — the tone in this new single is much darker and resilient than ones before. Its narrator pushes forward through the thick of what ails them but the end goal isn’t as romantic as, for instance, a song like “Love The Ride,” in which they ultimately decide to leave their hometown. Instead, in the wake of unimaginable lose, the only discernible purpose is to survive in solitude, perhaps in service of the past.

The Talbott Brothers have always leaned on textural instrumentation that evokes landscape, though here it has changed a bit. Nick and Tyler’s pained harmonies seem to come at once from within and from above. The pounding stomp of their dustier folk work is there, but the arrangement is less swashbuckle and more grand, sweeping down like wind from a mountain.

It befits an album that, as Nick says, is more informed by a fading ideal of black and white eroded by new experience. For one, the brothers wrote from home instead of the road, giving themselves more time to let the songwriting set in. Those quieter moments lent a new perspective.

“There wasn’t just home and the road for us anymore,” Nick says. “The diverse details of our economy, faith, political system and personal relationships are a lot deeper than we sometimes feel comfortable acknowledging. The songs tell stories about making the most of what we have and doing the best we can as broken people living in the gray.”

Now, listen to the premiere of “Wanderer” below:

Omaha nonprofit Film Streams has announced the winter schedule for its movie documentary series Sights On Sounds. Every Sunday from now through March 19, the downtown theater will screen a different film on a music figure, topic or event.

This Sunday’s feature, Oasis: Supersonic, dives into the British band’s meteoric rise in the 1990’s and the Gallagher’s intense sibling rivalry. Other series films celebrate songwriter Leonard Cohen, examine the New York jazz scene of the ‘50s and ‘60s and tour 2016 with the Rolling Stones.

Find a fuller listing below. All films screen at 7 p.m., and are $9 for general admission, $7 for seniors, students, teachers, military, and those arriving by bicycle and $4.50 for Film Streams Members. Find them here or at the box office.

Musicians/bands: have an upcoming show, rolling out new music or heading into the studio? Let us know what’s next by emailing news@hearnebraska.org. And view our guide to securing press coverage here.

Plan your week in showgoing with our statewide calendar here. Are we missing something? Email us or add it yourself using our contribute feature here.