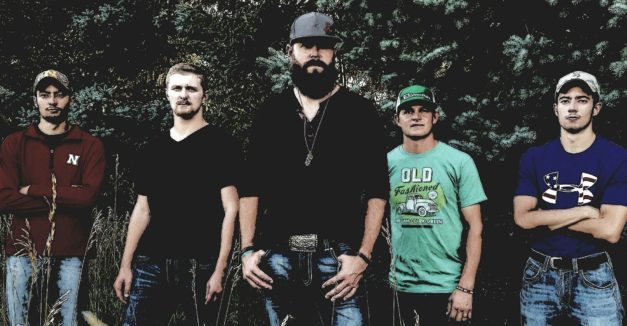 Ghost stories aren’t the only things shared around a campfire. When Matthew James Landgren and Casey Lee Chytka started playing music together it was as a hobby, something to do to entertain people by the fire. The project sparked, however, and slowly grew from there.

“When I was a kid, I always wanted to make music,” Chytka says. “It all started with Matt and me sitting around that campfire. Then it was about playing to bigger crowds, and better shows, and then actually recording a record.”

Since its formation in 2011 the James Lee Band has seen some changes in its members, including the departure of Landgren, but the flame remains as strong as ever. Inspired by the Oklahoma “Red Dirt” country style and its bands like Turnpike Troubadours and Whiskey Myers, the group provides a stimulating take on the tenacity of Midwestern identity filling tracks with hearty guitars led by Chytka’s vocals. The band released its self-titled debut EP in 2015 and are currently working on a full-length follow up. Before closing HN’s Hear Grand Island series this Friday, Chytka spoke with us regarding what he’s loved about bringing his childhood dream to life and what continues to fuel its growth.

Hear Nebraska: Casey, the group got started as a hobby shared between you and former guitarist, Matt. How did you find it evolving into a full project?

Casey Chytka: Just like most bands we started out wanting to learn enough songs to entertain a campfire, and then it just slowly built from there. We played a couple of bar gigs for some free beers and some burgers and decided to see just how far we could take it. We wanted to give it a go as a full band, so we persuaded our former drummer to learn to play the drums, and our current lead guitarist, Trevor Nekoliczak, to learn the bass. I had been writing for a couple of years, and it got to the point where people started requesting those songs at our live shows. It was always a goal in the back of our minds to try and cut some sort of record, so we bit the bullet and hit the studio. It was something that not everyone gets to experience, and we’ll always be proud of accomplishing that together.

HN: The James Lee Band is heavily influenced by the “Red Dirt” country genre that originated in Oklahoma. What do you think this style of country brings to your music and to the more Midwestern audiences?

CC: It’s always been our mindset to play the music that we want to play, and not necessarily that weekly number-one song on mainstream radio. We’ve been doing that since day one, and lately the Red Dirt movement has really started to gain momentum. I think that people are starting to buy into it because most of those artists are just like all of us from up here in the midwest. They work hard through the ups and the downs, and will do whatever it takes to do what they love for a living. It’s music that speaks the truth, represents a strong work ethic, and recognizes that there are very few people who find overnight success.

HN: Instrumentation on your self-titled EP is relatively sparse which makes it feel reflective of a live performance. Understanding that representing authenticity is important to the band’s identity, would you say that this was a deliberate choice or something that developed through recording?

CC: When you go into a recording studio the first time it can be a little intimidating. We weren’t really sure what to expect, so we practiced our songs repeatedly until we were happy with what we were taking in. We we’re fortunate enough to get to work with Matty Sanders from Fuse records in Lincoln which made the whole experience a lot less stressful. He kicked us some ideas to tweak some things, and we were thrilled with how it turned out. I think that it is a good representation of our sound, and we strive to duplicate it on a nightly basis.

HN: The EP ends on an acoustic song, which is a bit of a departure from the rest of the record. What made you decide to end on that note?

CC: “Solid Ground” was one of the first songs that I ever wrote, and is about not being afraid to take a chance to make a dream come true. When I was a kid I always wanted to make music, and it all started with Matt and me sitting around that campfire. Then it was about playing to bigger crowds, and better shows, and then actually recording a record. The boys and I just felt that it was more sentimental to cut it the way that it started. Anybody can catch a dream, you just can’t be afraid to chase it.

CC: We take pride in our great state, and the friendly, hard working people that live here.  Original music from local talent has a great way of capturing the things and places in Nebraska that make it so great. It tells the stories of who we are, and what we’ve done, and helps people reminisce about all of it. You would be surprised how many people have asked to go have a drink on “None Ton” bridge from our song “My Country”. It also gives everybody a chance to go to their local watering hole, kick back and relax, and enjoy some of Nebraska’s finest. So keep supporting that live music because we can’t do it without you!

New Generation Music Festival is back at Stinson Park for its second year with its two biggest headliners yet: trailblazing hip-hop legends Talib Kweli and Rakim.

The festival happens Sept. 16 and is a free event.

“Our vision is to cultivate local talent and artistry as a means to a more secure and sustainable economy in the urban core communities,” says Patrick.

NGM announced its lineup on Tuesday, scaling back the number of artists compared to last year’s inaugural festival but adding room for the two headliners. Rakim makes his Omaha debut at the festival as part of his 30th anniversary tour for Eric B. & Rakim’s classic album, Paid in Full. And Kweli, best known as one half of his duo with Mos Def, Black Star, will hit Stinson Park with cuts from a new collaborative record with Styles P, titled The Seven.

Nebraska welcomed more refugees per capita than any other U.S. state last year, bringing in 1,441 refugees from a dozen countries. Much of the Omaha area’s success in aiding refugees is due to the efforts of Lutheran Family Services of Nebraska.

Together, Lutheran Family Services and Benson First Friday host the New American Arts Festival in an effort to highlight the art produced by Omaha’s immigrants and refugees. Through facilitating a stage for refugees at the festival, organizers hope to change dominant perspectives on refugees.

“[People] don’t talk about the art they are making and food they are cooking, [people] are talking about the resources they are taking,” says NAAF organizer Amber Barcel. “It’s a great way to expose people to what these people are about.”

NAAF returns this Friday to Benson’s Military Ave., and will stage dance, beatboxing and choral music, and line the street with an artist market that boasts refugee and immigrant-produced leather goods, scarves and textiles. Visual art will be shown throughout Benson, too, on display on Military Ave. and at businesses such as Jake’s Cigars and Lion’s Mane Vintage.

For its fourth festival, NAAF took a different approach to selecting artists and performers, employing an application process this year, which festival organizer Amber Barcel says helped expose she and her colleagues to new artists who they may not have booked relying on the word-of-mouth “crapshoot.”

“We finally got our ducks in a row, learned how to be better organizers, and we wanted to streamline the process,” Barcel says.

The new process yielded a culturally diverse lineup with contributions from Karenni, Nepali, Sudanese and Afghani refugees. Barcel expects attendees to be surprised by the number of cultures represented because most people, she says, immediately think of Karen and Sudanese when they think of refugees. But with performance headliners Oscar Rios of the Andes and the Burundian Umoja Choir ‒ which performed with Laura Burhenn of The Mynabirds at an Omaha mayoral rally in April ‒ NAAF features a wealth of refugees from all over the world.

“I want people to know that these people exist in our city and they’re doing really wonderful, beautiful things,” Barcel says.

When Hurricane Like Me frontman Joshua McManus grasps a burning microphone on the top level of a parking garage at the outset of his band’s first music video, “Decisions,” he wears a look of determination on his face that screams “try to stop me.”

The video, directed by Aaron Gum, sees the band performing “Decisions” in the dark, lit only by the lights of the downtown Omaha skyline and the hypnotic burning of two fire twirlers’ batons.

With McManus’s insistent belting of lyrics that force his doubters to “watch him burn,” and drummer Justin Essink’s lightning-quick fills, the combination of the barrage of lights, fire and punishing hard rock make for a fully realized, confident debut.

Hurricane Like Me makes its live performance debut at Ralston Arena on Aug. 9 as part of the Make America Rock Again Tour with Scott Stapp, Trapt, Drowning Pool and Sick Puppies. RSVP here.

Check out the video for “Decisions” below.

Head out to a show to get you over the mid-week hump. See our picks for where you should be on Wednesday and Thursday, and head over to our events page for a more comprehensive list of shows.

The Ron E. Beck Soul Revue with A Family Affair at Midtown Crossing – Premiere jazz drummer/vocalist and Omaha-native Ron E. Beck performs as the Ron E. Beck Soul Revue with his siblings Donnie Beck, Keith Rodgers and Carol Rodgers tomorrow night as part of Midtown Crossing’s Jazz on the Green. Beck has performed with the likes Tower of Power, John Lee Hooker, Bill Withers and more. His new band delivers funky beats and R&B-tinged tracks that will be sure to move you. The group will perform the show, appropriately titled “A Family Affair,” in honor of their mother, Jeanne Rogers, a retired Omaha Public Schools educator and jazz artist. Local players Curly Martin and Jorge Nila will also join the group on stage.