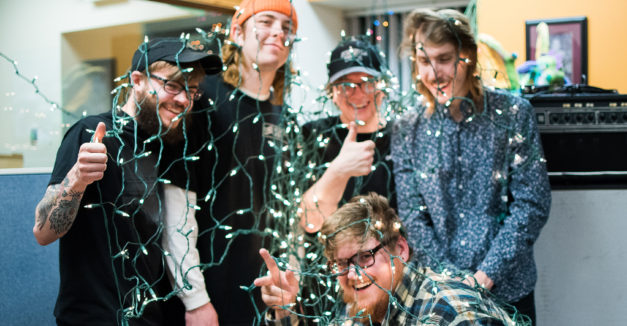 In Where Strangers Go, the new EP from Lincoln band Salt Creek, vocalist Chase Thompson is emotional but measured, calm, relaxed and considered. For much of the indie rock band’s meditative, sparkling debut, it’s like hearing one side of a level-headed dialogue and being able to infer the other. The choices matter, the air is heavy but familiarity and intimacy keep the tension at bay. Whether you’re the one that’s leaving are being left, there’s mutual respect.

The Lincoln five piece’s grasp of intimacy and even-keeled attitude are a huge part of what has made it locally successful so quickly. Though it has only been around since April 2016, the mood of its first singles immediately felt like the natural destination for its members. Guitarist Nathan Richardson and drummer Nate Skinner toured together for years in Kearney post-hardcore band Lighthouses, and Thompson himself shared the stage with the likes of Basement and The Story So Far in former project Everything Breathes. Bassist Zach Chrastil cut his teeth with Roseland, Neb band For The Birds and guitarist Cam Penner has both played in and covered the Lincoln music scene.

Their collective humility and group cohesion adds up to a crisp professionalism, sharpened by those previous endeavors, and it’s what makes their live shows engaging. Salt Creek’s brand of stoicism feels native to the rural roots they claim and it’s why the band can offer such relatability. Thompson’s honesty is so direct and so comforting at once, because its central foci — often some battle between ambition and lethargy, action and static — are familiar, but also because that headspace feels like a trust circle. Hopefulness flows from the band’s glowing, living soundscapes, which evoke a rural night sky, a rolling gravel road, a mud-spackled barroom floor. Being this forthrightness with yourself is more powerful when wrapped with such warmth and when surrounded by elements of home.