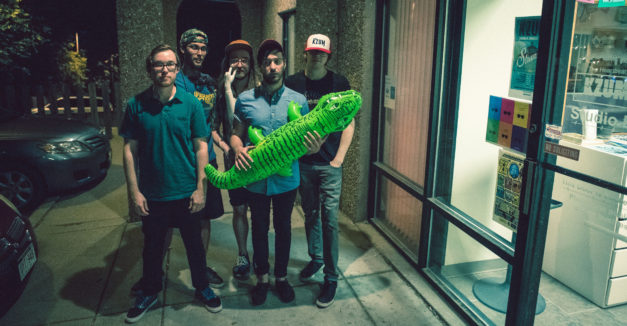 Almost a year ago now, the then-duo Centerpiece entered the studio to record its sun-kissed, melancholy debut album with Boston producer Jay Maas. This is weeks before Will Conner, the indie rock band’s vocalist, would perform for the final time with his long-running punk project No Tide, who decided to call it quits after five years.

In that moment, so much was different and so much the same. Conner had partnered with Bed Rest guitarist Paul Knapp, who brought a snappy, sparkling approach to lead guitar that, on the new record, puts wind in the vocalist’s wailing sail. While that vocal style remains relatively in-tact, and while Conner again trusted Maas — who has produced for the likes of Somos, Defeater and, yes, No Tide —  with helping him realize his vision, there was an oddly soft spring in the duo’s sonic step.

The self-titled result of that session, which dropped May 5, is a tightly crafted mix of melodic punk, mid-’90s alternative and emo rock that bursts with emotion and wrestles with boundaries both spatial and relational. Knapp has referenced the likes of Chris Conley and Stephen Jenkins as their writing muses, and that “alternative-ness” really shines through here. If one were to compare styles, Conner’s quick, clever lyrical idioms put him close to the Third Eye Blind frontman.

Behind him, Knapp’s fingers are in constant-motion, spindling through arpeggiations and blasting chords in catchy hooks. And the pair has enlisted a wealth of musical experience in drummer Dave Mcinnis (Timecat), bassist Jon Ochsner (All Young Girls Are Machine Guns, Those Far Out Arrows) and keyboard player Jay NeSmith to bring those songs to life on the live stage.

So here they are, Centerpiece, with “Concrete Floor”

Hear two tracks from Centerpiece below and listen to the band chat with our host about recording in Boston with producer Jay Maas, assembling a band around the new project and why all-ages spaces are important to growing music scenes.