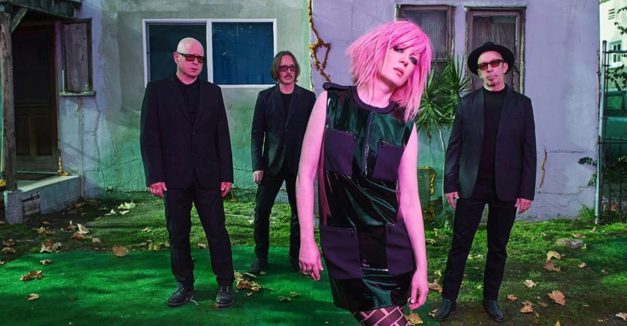 Two decades in, Garbage are more the consummate professionals than ever. To read interviews from the band’s recent bout of press in support of last month’s Strange Little Birds, the band’s sixth studio album, is to see a quartet craftspeople pull back the curtain: dedicated, efficient and well-trained workers showing up every day as opposed to the muse-driven artist, working through inspired spasms between long doldrums of creative block.

Tonight, Garbage plays SumTur Amphitheater. We caught up with Lyons native and Garbage bassist Duke Erikson to talk about the band’s process around the new record.

Hear Nebraska: Twenty years on, have you found yourself becoming more patient as a band, with touring, recording and releasing schedules?

Duke Erikson: We have our own label now, we have a manager who has been a friend of ours for as long as we’ve been together. We’re very comfortable with the business side of things now. We call our own shots. We make our own release dates. I think we are a bit more patient. We certainly have learned not to get too upset about anything. There’s nothing more important than enjoying your work and doing it well. That’s something that takes a while to learn. A bit of wisdom comes with own age, though never enough wisdom.

HN: It seems like most bands are lucky to make it ten years, let alone 20. To ask directly, how have you managed to stay a band for so long?

DE: I’ve been playing with (drummer) Butch (Vig) since 1978. We’ve been friends with (guitarist) Steve (Marker) nearly that long. When (vocalist, guitarist) Shirley (Manson) came along, she instantly became one of us. That’s the secret. We’re friends first. Not every band can say that. They fall apart for personal reasons maybe. Many bands don’t have the good fortune to sell a lot of records like we did, that helps. But most of all it’s respect for one another. The four of us have a remarkable ability to work together. As four opinionated people, we still manage to come up with an album now and then.

HN: How have your roles in songwriting evolved, especially for Strange Little Birds?

DE: It’s hard to quantify that. I don’t think it has changed much. Some people bring more to a record now and then than the others, but by the time it’s done, we’ve all had our way with the songs. By the time it makes it through the Garbage process, it’s all of ours. Our roles take on different changes depending on what we’re contributing to a song.

Essentially it’s pretty much the same way we’ve done every record, but easier, because we all agreed on the direction this record should take. It took a lot less effort.

HN: Compared to earlier Garbage records, there seems to be a lot more focus on an overall tone of voice on this one.

DE: We’ve talked about this some, but Steve brought in the music for Sometimes. I think it was the first day we got together. I was so struck by that music, I said immediately it had to be the first track. And now it is. It was the first track that really set the tone. It sparked something in all four of us that really never left as we were working on every other song. It was a set of colors to choose from as we worked on the sounds. I think that’s what you’re referring to, there’s a certain mood and atmosphere to record. That we were all moving toward the same direction made it a very enjoyable album to make.

When Better Friend’s Meghan Munyon, amidst a flashing assault of light and film in its new video, screams “Is someone like me,” the feeling that sticks out among the spectrum is exasperation. It’s as if repeated relational trials and failures have ended in such disarray they flicker before her, hauntingly cinematic.

Today, the band shares “Someday We’ll Laugh About Everything,” the emotionally distraught video for the closing song from Better Friend’s debut EP Safe House. The Lincoln post-hardcore quintet heads out on a brief regional tour, which starts tonight in Lawrence, Kan.

Munyon’s scream — intertwining with guitarist Kalib Faltys’ raging, equally pained roar — signals the explosion of pent-up frustration, hidden by her initial resignation throughout the song’s early bars. The anguish comes to a head as chaotic guitar leads and a pounding rhythm section drum all pieces of the past bursting to the surface. The video, directed by JP Davis, displays the visual manifestation of that turmoil through memories seeming to play mercilessly before them.

Watch “Someday We’ll Laugh About Everything” below:

Sights On Sounds continues with ‘As I Am: The Life and Time of DJ AM’

Film Streams summer ‘Sights On Sounds’ series continues Sunday with a documentary depicting the life of one of the world’s first truly superstar DJs.

‘As I Am: The Life and Time of DJ AM’ is a comprehensive look into Adam Goldstein’s life. The Philadelphia native launched his career in 1999 as part of rock/rap group Crazy Town, having already battled addiction and domestic adversity. After leaving the group, his solo career propelled him to greater heights.

“DJ AM experienced meteoric success through both raw talent and sheer determination, overcoming what for others might have been staggering adversity before tragically succumbing to the demons that dogged his life and career. The film’s pacing and style captures the frenetic speed and dynamism of DJ AM’s life as well as introspective moments of candor and insight.”

It’s the weekend. There’s plenty in live music and tons of it outdoors. Find a fuller listing at our statewide calendar here. If you do not see your show or one you plan to attend, leave it in the comments or add it yourself here.

Lincoln punk rock band No Tide puts the finishing touches on a five year career tonight, playing its final show tonight at Vega, 350 Canopy St. A medley of punk/post-punk bands send them off in A Summer Better Than Yours, Mad Dog & the 20/20s and Salt Creek. Read our interview with the band on last year’s full-length debut Death Of The Sun here. The all-ages show is $10 and starts at 8 p.m. RSVP here.

Council Bluffs’ Broadway Skatepark will scream with the sounds of punk rock and young skateboarders tomorrow night as CB Skatefest is back for its fifth year. The 15-band bill includes Cordial Spew, Hand Painted Police Car, The Shidiots, No Thanks, The Fat Timmys and more. Read our interview with festival found Trevor Hill here. The concert is free, and all proceeds from the raffle will be donated to Midwest Dog Rescue. See the full lineup and RSVP here.

Also tomorrow, Kansas City-based act Dark Satellites plays Barley Street Tavern, 2735 N 62nd St. If you were around the scene roughly a decade ago, you might remember the man behind Dark Satellites, Drew Rudebusch, from Rent Money Big. The Lincoln hard rocking foursome was active from 2002-2007, and played a one-off New Year’s Eve reunion to ring in 2010.

Over the past few years, Rudebusch has refined his instrumental and recording skills, the product of which is his new full-length album Be Still. It’s 10 tracks of loud, fuzzy guitar rock, many of which are inspired by his personal experiences growing up in rural Nebraska.

That’s all for now. Enjoy the weekend. Remember to send all news tips, story ideas and song submissions to news@hearnebraska.org