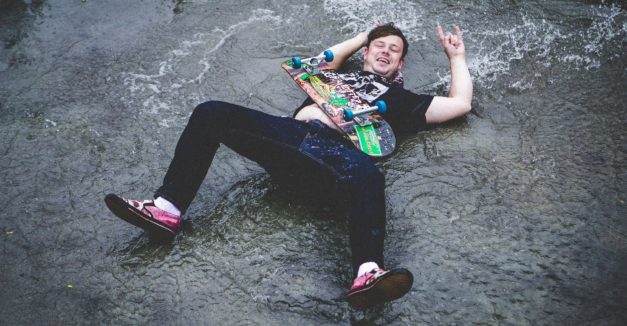 It’s raining at Broadway Skatepark, the skater cove tucked underneath Council Bluffs’ ketchup-mustard bridge on 13th and Broadway. Trevor Hill, 31, doesn’t mind; he’s skated in the rain before. His Against All Authority tee-shirt is damp, but his enthusiasm for CB Skatefest, the festival he created five years ago, keeps him proudly puffed up and bursting with excitement.

Hill started Skatefest in the same neighborhood he grew up in as a way to give back to his community in a way that he would have appreciated when he was younger. A way to give the kids who love skateboarding an honest afternoon, and a shot at some quality equipment.

The church-sponsored events held at the skatepark designed to “get kids off the streets” had no appeal to him, even as a kid. He wanted something a little rowdier, realer, a community event that didn’t try and convert anybody or shove morality into the laps of the local skate rats.

“I remember thinking that stuff was lame when I was little,” he says. 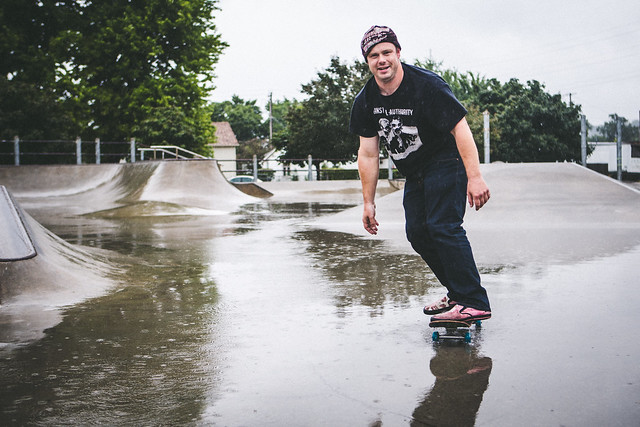 So Hill and some friends brainstormed Skatefest — a free, all-day punk rock and skateboarding festival that, this year, features 15 punk bands on a nine-hour bill. Hardcore punk veterans RAF and Cordial Spew and younger, lighter groups like The Fat Timmys and The Kennicks will share the stage underneath the newly built skate park pavilion this Saturday, July 9 (RSVP here).

Spiky-jacketed punk bands aren’t the only spectacle at Skatefest. Carnival games, drunken clowns, and impromptu skating competitions have all appeared over the years. A pie-eating contest and a baseball-throwing game — where the first kid to crash a tower of champagne flutes wins — are two of this year’s sideshows.

Hill says one highlight every year is convincing kids to climb the trees near the stage and pelt drummers with small objects.

“The challenge is to see how many things you can hit the drummer with,” he laughs, playfully rambunctious. “We’ll bring like 50 bags of buttons, and everybody just frisbees them at the drummers.”

“That’s the cool thing with us not being affiliated with a church or anything,” Hill jokes. “We can get away with anything. The kids just look forward to talking trash to me all year.” 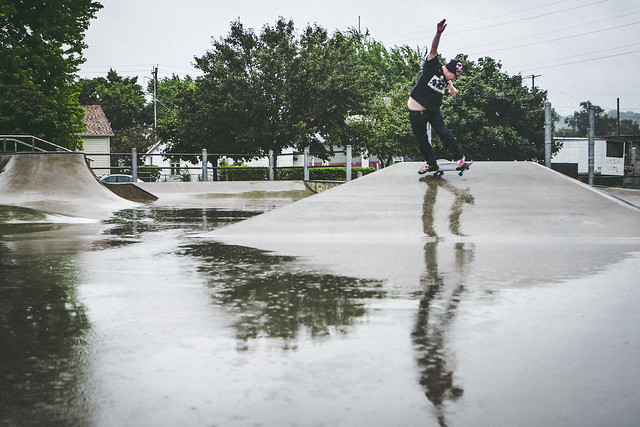 Hill says although the festival mostly hosts punk bands, he’s open to all genres playing. The reason they haven’t had rappers or other styles also in tune with skateboarding is because those artists haven’t reached out, he says. Acts in the past have bent genres, though, like the flautist who rocked Metallica covers.

“We always kinda joke, ‘Punks and skaters only at Skatefest,’ but that’s not the way it really is,” Hill says.

Initially, the fest was to be music only, but the organizers realised they had a lot of old gear they could raffle off for charity. The first year’s raffle proceeds went to the Make-A-Wish Foundation, while the other years have gone to the Midwest Dog Rescue Network. The network finds homes or no-kill shelters for dogs who would otherwise be euthanized, and also provides pet food to struggling owners.

Raffling became a major part of the event — this year, Hill says there is around a thousand dollars worth of prizes, including t-shirts, skateboard decks and bearings. At least one board is Dragon Ball Z-themed, sure to be a hot item.

Though he’s not sure how long it will last, Hill is proud of what Skatefest has become. It’s grown over the last five years into an anticipated and positive force for young punks and skaters.

“You leave off that high of doing something really great for your community,” Hill says. “I can’t say I’ll do it forever, but this is gonna happen next year for sure.”