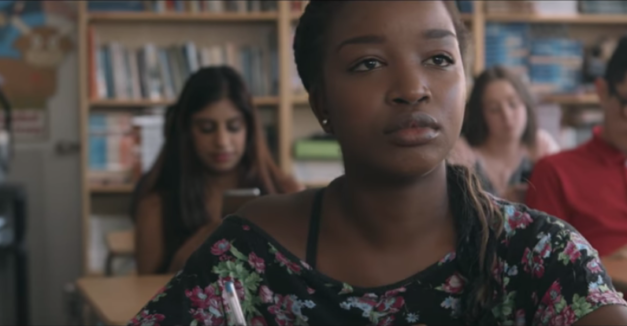 Joni Mitchell wrote “Woodstock,” an eventual countercultural staple, from a New York City hotel room in 1970, while the festival was going 100 miles away on Max Yasgur’s farm. She told a reporter shortly after that her absence from the festival gave her “an intense angle” from which to describe it.

It is from a similar angle that the students in Omaha-native musician and philanthropist Peter Buffett’s new video and cover of “Woodstock” become inspired. As they look up from their cellphones and look on, via videotape, at political and social movements throughout 1900’s U.S. history, each sees themselves in the participants. Those visions stir a similar spirit in them as they unplug and march out of the classroom to affect change.

With his latest release, Buffett sought to update Mitchell’s message to reach its contemporary audience. While the accompanying press release cites Crosby Stills, Nash & Young, Buffett’s reinterpretation is much more hymnal and ethereal than the worn-in rock song, more reminiscent of Mitchell’s original dreamy, reflective version and consistent with his own work.

While the latter describes a spiritual experience on Max Yasgur’s farm, the Buffett rendition (like many subsequent playings) focused on the strength and capabilities of the countercultural movement. That backdrop allows for a sort of epiphanic experience, which manifests itself in the video’s student’s.

Watch Buffett’s take on “Woodstock” below:

Tonight in Omaha, The Hottman Sisters, Bien Fang and Scott Nohrenberg play The Waiting Room. The sisters Jessica and Heather released a new music video Tuesday for “My War,” the sweeping title track from their debut EP This Two; watch it below. This show is their last before embarking on a month-long tour through the Midwest and Northeast starting Jan 5. Doors at 7 p.m., $7, RSVP here.

Also tonight, O’Leaver’s features a four-act billing of Conny Franko, Bib, The Subtropics and Jim Schroeder. It is the annual holiday show for The Subtropics. Meanwhile,  Franko and Bib have had busy years, piling up mentions on national year end lists as well as our own contributor’s mentions (here and here) for their respective 2016 work. Schroeder will play a short set to start. 9 p.m., $5, 21-plus, RSVP here.

In Lincoln, AZP, A Ferocious Jungle Cat and Powerful Science play their final shows of the year at Zoo Bar. 9:30 p.m., 21-plus, RSVP here.

Check out the rest of the week in concerts via our statewide calendar here. What are we missing? Email news@hearnebraska.org with news tips, events, story ideas and other music community info.