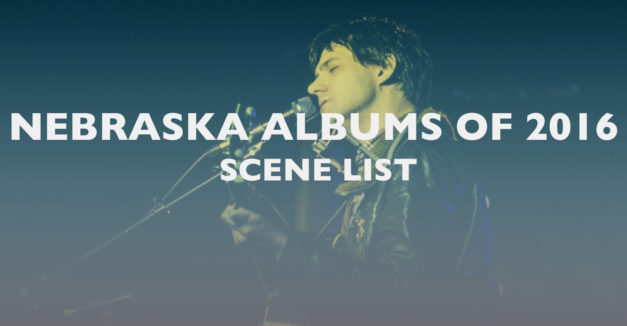 To help assess the year in music, we asked more than a dozens musicians, journalists and scene figures for their favorite albums, songs, shows and events of the year. Check back each day over the next few weeks for more reflections and predictions.

Nebraska music was strong this year from just about every angle, and that includes what is now on record. Below, our year-end contributors dig into the modest but eclectic pile of Nebraska EPs and full-lengths and give a veritable smorgasbord of their favorite albums of 2016

Conny Franko‘s La Maga. Hip hop dominated nationally this year with Chance the Rapper, Schoolboy Q and others, and I easily put Conny Franko up there with them. The hooks are elegant and the beats are heavy and classic. Top it off A-plus production with Conny Franko’s raw, rough vocal style and unapologetic, honest lyrics. I couldn’t talk about this album enough.

Conny Franko‘s La Maga. I swung by his place and picked one of these up, which might be the greatest thing about local art and music. You can just grab it right from the source.

Tara Vaughan’s Dandelion Wine. A longtime Nebraska songwriter and performer found herself with the right songs, at the right time and put herself out their properly. It’s an album that should be recognized well beyond Omaha.

Jocko’s demo. It straddles a line between hardcore and noise rock that creates depth often missing in punk albums. The first 30 seconds of “No Money / No Problem” don’t sound like anybody else in the state. They’ll also ride a riff like the first ripper in “Soylent Green” with 100% honesty at all times. No posturing or pretension. Jocko’s handlin’ some business.

I would definitely say Bib’s POP was a big highlight for me this year. They have absolutely exploded onto the scene and I am so excited to see where they go from here in the upcoming year.

Bib put out one of the gnarliest punk records in 2016. They also have one of the most intense live sets to back up this record.

I didn’t pay as much attention this year as in year’s past, so this answer is more reflective of what I happened to catch than anything authoritative. That being said, I was happy to see a full-length from Bogusman. Those boys are one of the most exciting bands in the state right now and Matty Sanders did a really nice job of putting their sludgy live sound to record.

I really loved Noah’s Ark Was a Spaceship‘s Three. I thought it was a good direction for them to go. Just good, heavy, slow, stoner rock. “Song 3” also has the sickest, most simple guitar riff.

I loved the new Kait Berreckman album, [Battle Scenes]. She has such a clear voice and classic storytelling style in her songs. Totally draws me in.

Kait Berreckman‘s Battle Scenes is saved on my bookmarks bar. It’s there because it’s fucking great and I’ve needed it. A lot. I personally resonate with a lot of the deeper themes. It’s written, played, and produced exceedingly well. And Kait’s primal screaming at the end of “I’m Fine” gets a standing O. Every time.

Easily the local album I’ve listened to the most in 2016 is The Shidiot’s Black Shirts and Records, even though it only came out in October. It’s just a great pop/punk record recorded by Doug Decker (of Cordial Spew/Buggy Lewis/138, et al.) and it sounds like a lot of 90’s era Fat/Epitaph bands. In fact, the band name-drops NOFX and Propaghandi in the catchy sing-song track that shares its name with the album. I can’t wait until they actually get it on vinyl so I can buy the record instead of having to listen to it on their Bandcamp.

Terrace Martin‘s Velvet Portraits. It can’t be categorized and that’s one thing I really love, it’s unexpected, the musicianship is excellent, production is excellent and it contains messages i love.

I absolutely loved MiWi La Lupa‘s album Ended Up Making Love. Being a La Lupa fan for a long time, it was wonderful to hear the singer-songwriter take on new sounds from his first album. There’s a lot going on in that album that really shows the versatility of the artist. I really enjoyed the album through and through with its honest lyrics and fantastic instrumentation.

My favorite album of the year would definitely have to be J. Crum‘s album Black Sheep.

I’m a big fan of The Hottman Sisters’ EP, This Two. It was cool seeing them take their catchy songs from a live setting as a duo to the studio; while then transforming into an exciting four piece over the course of the year. I think Jessica and Heather are going to do big things!

This Two by The Hottman Sisters. It’s exciting to see and hear this group develop live and hear their recording efforts. There are some hot jams, and they sing so well together! And, who doesn’t love [producer] Adam Roberts? AND John Evans behind the kit is killer!

Definitely ROT by INFNTLP. I’ve been a fan since I was introduced to BOTH and this record is just so in it’s own world. You can tell that it draws from a lot of different musical zones but when the breakbeat drops on “Dusk” it’s just like damn, no one else is doing that stuff in Omaha.

Jack Hotel’s Voices From The Moon really moved me this year. I’m a huge fan of the unique way Gunter plays guitar, and I had been able to sing pretty much every lyric to every song on the album because they’ve been playing the songs in their live sets for a while now.

Conor Oberst, Ruminations. One of our finest songwriters, doing some serious work. By ‘our,’ I don’t mean Nebraska’s but humanity’s.

Conor Oberst — Ruminations. I think it’s some of his best songwriting, and it’s minimal and dark and kind of lonely sounding. For his songwriting and message, I like this very minimal sound a lot. I listened to it and it made me want to write and record songs again.

Conor Oberst, Ruminations. Recent years have presented some major challenges for Conor Oberst, and one of the ways he’s chosen to process them is through this collection of songs. Ruminations is filled with energy, but it’s not necessarily directed toward resolution. I don’t think that’s the point. There’s a detached feeling to this album, as if its maker has stepped outside of himself to better observe his thoughts and emotions. They’re not always pretty; in fact, sometimes they’re quite unsettling. Yet the more he sees, the more insight he gains. I think we’re lucky that Oberst chose to share this process with us. In doing so, he’s shown us what it means for an artist to turn to art in times of personal struggle.