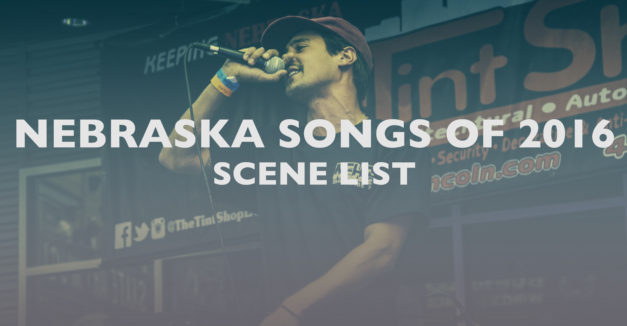 To help assess the year in music, we asked dozens of musicians, journalists and scene figures for their favorite albums, songs, shows and events of the year. Check back each day over the next few weeks for more reflections and predictions.

2016 was arguably a huge year for EPs and singles. The way in which many of Nebraska’s musicians released music created a constant stream of new material. This happened seemingly across all genres, with bands like The Way Out, The Ambulanters and Bib dropping debut EPs while the likes of Both, AZP and Haunted Gauntlet sprinkled in singles throughout.

Some of our year-end contributors nod at those single releases, while others pulled from big-name full-length releases. Below, find the list of their favorite Nebraska songs from 2016.

“Azucar” by Conny Franko & Sm Grims. La Maga is another favorite album of 2016. On a spare record (just 36 minutes) “Azucar” is really emblematic of the whole piece — it shows a measure of restraint without obscuring the chemistry between the MC and producer, both singular talents in their own right.

My favorite Nebraska song of 2016 goes to “Dreamcatcher” by Oquoa off their new album In Oneir. Talk about a superb track from start to finish. It features this totally rad synth melody that constantly underscores the Morrison-esque vocals, the driving groove from the bass and the splashy and deliberate beat from Roger Lewis. The song is so dreamy, melodic and complex but yet so accessible. It’s a sensory joy to listen to with some good headphones and a cleared head.

“Flash Drive” by Both

“Nerves” by The Way Out. The song perfectly replicates young summer love which, while arguably a tired trope, is sweetly refreshed with Mari Crisler’s and Levi Hagen’s layered vocals and that clean, shrill guitar tone in the chorus. The lyrics are simple and poetic, and six months later, it still gets me blaring it in the car shouting, “I’M OVER YOU, IT’S ALL FOR YOU,” like I’m 16 years old again.

“Leave The House” by The Ambulanters is definitely one of our favorite songs of 2016. It’s dark, but dreamy, but poppy… it’s crazy as hell. Definitely one of the funnest bands live in Nebraska right now.

“Walk Into your Light” by AZP ft Hakim,CJ Mills and Mary Lawson. A sonically powerful, uplifting joint that draws out emotion and captures mystical energies

“A Little Bit of Both” off the new Miwi La Lupa record is catchy as heck. It definitely made it’s way onto my gym mix.

Another MiWi La Lupa song which appears on his second 2016 release entitled Beginner’s Guide, “A Little Bit of Both” was my favorite Nebraska tune. The song is so highly danceable, yet the lyrics are a ponderous sort about how too much of anything is no good, but a little bit of both can bring about a certain balance in life. La Lupa’s band really shines on this track. The bass line, drums, and jazzy riff blend together into what I would argue is one of the best songs to come out of Nebraska.

I really liked “Dark Matter Woman” by Super Moon on their self-titled EP. It’s a head-bobbing, riff-laden tune that shifts to fist-pumping blues/rock heavy metal. This is a young band of stoner/doom/rockers that have been doing some touring out of Omaha in 2016 as well. I know that they’ve also been recording some new stuff with AJ Kercher at Off The Record, so it looks like they’ll have some new music out in early 2017.

“Valdez off Crenshaw” from Velvet Portraits. It’s funky and smooth and shows great restraint from all players letting what’s magic be magic.

“No Exit” by Bib. I can’t figure out what he’s saying but I dig the energy for real.

It has to be “Kari” off ROT by INFNTLP. This track is just undeniable sugar dripping ear candy magic. It makes me wanna lay on the floor and dissolve.

Adam Haug/Haunted Gauntlet just released “I Can’t Die” out of nowhere. I think his production work as Haunted Gauntlet is really intriguing, and I’ve always liked his lyrical song-songs. Anything by Big Slur too.

“Big Heart” by Miwi La Lupa. Miwi is a phenomenal storyteller. In the current political predicaments we find ourselves in, he’s got powerful lyrics that stuck with me like “I can spare some change man, but don’t know if change gon’ come.”

“Till St. Dymphna Kicks Us Out” by Conor Oberst. That’s my old haunt back in NYC.

It’s no secret that I am a H U G E Faint fan. “Young and Realistic” is deeply brooding, yet intensely catchy with super interesting synth lines. It’s new and yet it’s classic. It’s the kind of thing I like to pull out to show my friends from high school back in Florida so they can say to me: “That came from NEBRASKA?!”

“Mamah Borthwick (A Sketch)” by Conor Oberst. For me, it’s the perfect mix of mystery, ruefulness and hope for something better. A song about architecture, who can even do that.

It would have to be “Radiate” from J. Crum’s album Black Sheep. The vocals on the track add for a very pleasant listening experience.

So, Ian Aeillo live recorded The Hottman Sisters singing “Katz” at the HN Take Cover show for Live at O’Leaver’s,January 30th. It is literally the most perfect performance/recording of 2016. Note for note. Tempo. Energy. Instrument placement in relation to room mics (shout out to drummer John Evans). Mix. Literally the most perfect. Did we know it was going to come at us that quickly?! No. Does it mean the rest of the year was a wash? No. Did it tarnish my opinion of The Hottman Sisters’ studio recording of the song? Absolutely.