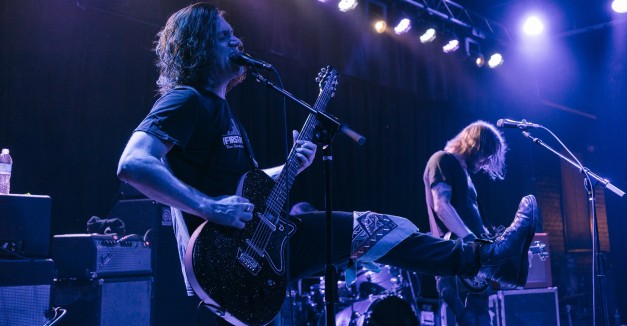 Awards season is once again thrust upon us, and with it comes the annual recognition of some of Omaha’s best musicians, bands and music professionals.

The Omaha Entertainment and Arts Awards have announced nominees for best-of awards in visual arts, performing arts and live music. Artist of the year nominees include nationally-touring Desaparecidos, hip-hop duo Both, soul ensemble All Young Girls Are Machine Girls and Kris Lager Band, among others.

Though nominees are largely Omaha based, the roster also includes acts from Lincoln and beyond that are active in Omaha or that tour outside the state. That would explain appearances by Freakabout, Oketo, Plack Blague, Kris Lager Band, Josh Hoyer & Soul Colossal and SharkWeek. Even Mark Wolberg is up for Best Live Music Sound Engineer for his work at Lincoln’s Zoo Bar.

Voting Academy members and fans will have the opportunity to see many of these acts Friday, Oct. 23, at the OEAA Nominee Showcase in Benson. Seven venues will host more than 40 live performances throughout the night (RSVP here). Though it’s likely — and one would hope — the enterprising show-goer is familiar with many of the nominees, or has at least heard or seen them in some capacity.

We’d like to issue congratulations to all of the nominees, and look forward to seeing more from each leading up to the January awards ceremony. For now, view the list of nominees in 19 live music categories below. The entire list can be found at the Omaha Entertainment and Arts Awards website here.

O’Leaver’s sound engineer Ian Aeillo has been a machine as of late. Today, Live At O’Leaver’s made public three new sets of recordings from Speedy Ortiz, Beach Slang and the Hussy, all recorded within the last four months.

All three have received a noticeable amount of buzz lately. Massachusetts based Speedy Ortiz played its O’Leaver’s set on Aug. 15, merely hours after its Maha Music Festival appearance. Pitchfork gave its new LP Foil Deer 7.9 out of 10 (lofty, by the website’s standards) for its musical complexity and vocalist/guitarist Sadie Dupuis’s sharp lyrics.

Philadelphia’s Beach Slang comprises an East Coast super-group of sorts, combining vocalist/guitarist James Snyder’s 20 years in Weston with drummer JP Flexner’s time in Ex-Friends and bassist Ed McNulty of NONA. The band is on the cusp of its first LP The Things We Do To Find People Who Feel Like Us, and will play a headlining spot at The Fest at October’s end. We talked to Snyder before the band’s Aug. 27 performance.

The Hussy has also garnered its share of national blog support after Galore dropped June 30 on Southpaw Records. Our readership might recognize Bobby Hussy from the split his band did with Digital Leather, and his collaboration with Shawn Foree on the synth project Tit.

Head to the Live At O’Leaver’s site here to hear these new recordings and the rest of the public catalogue.

Omaha/Austin, Texas-based label We’re Trying Records has announced its signing of Aurora, Ill., emo band Mighty Ships, and will release new LP The Coastal Midwest Thursday. The signing grows the independent label’s roster to three, with Lincoln’s I Forgot To Love My Father and Omaha’s Super Ghost on board for the Sept. 1 launch.

Mighty Ships has quickly grown a following since forming in 2013, playing the local house show circuit on the strength of its initial demos. The Coastal Midwest is the trio’s first LP and first label release.

Hear the Awakening demos below, and find more information about the album release here.