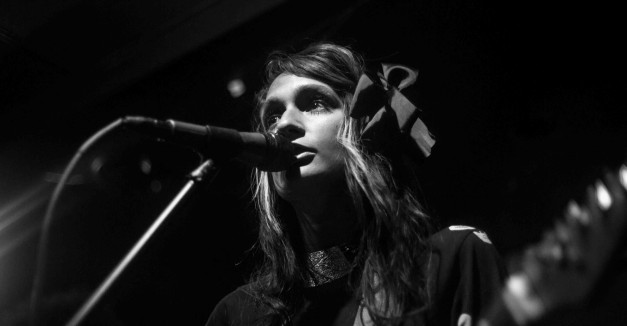 Deep backstage at Maha Music Festival, beyond sturdy black gear-boxes stenciled with words like “Modest Mouse” and “Purity Ring,” past a couple tents, one with food and one with beer, there’s a small fleet of unassuming RVs parked end-to-end.

Add a muddy pond dotted by fading paddleboats and it could look like Kampground of America.

But it’s today’s players, not vacation-weary families or AARP cardholders, hanging out in and around the campers on the achingly-sunny August afternoon. Inside the RV hosting, today, Speedy Ortiz and Ex Hex, my closest point-of-reference is a scene from Cameron Crowe’s Almost Famous.

The movie’s decidedly uncool (wide-eyed earnestness being, in this case, the opposite of cool) main character, 15 year-old journalist William Miller, hangs around backstage after a Stillwater show. He witnesses tech support, band members, hangers-on, etc. greet and part ways, making fleeting plans to catch each other down the road. Life imitates art and vise versa. 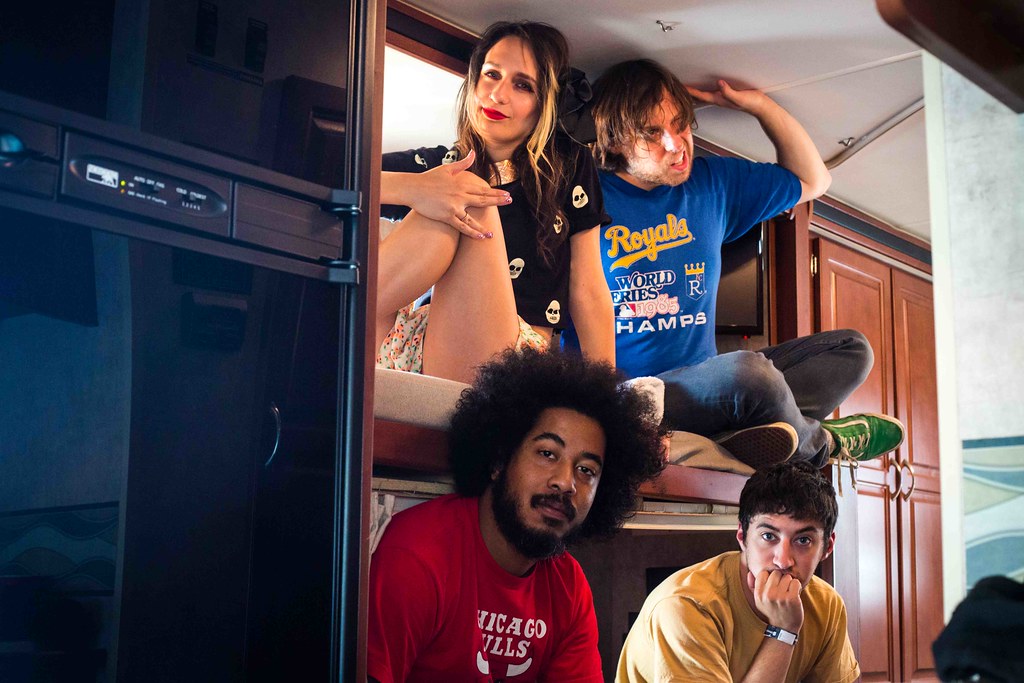 As Ex Hex prepares to depart, with a flight to catch in a couple hours, bassist Betsy Wright and Speedy Ortiz guitarist-vocalist Sadie Dupuis talk about when they’ll see each other again. The two bands, on their similar trajectories, played some 20 dates together last year.

There’s a half-empty bottle of cheap white wine and a smattering of fresh produce on the camper’s fold-up table. On the couch, Speedy Ortiz drummer Mike Falcone thumbs through the latest entry in Bloomsbury Publishing’s 33 ⅓ series, this one about the music from Super Mario Bros., composed for the 1985 video game by Koji Kondo (Kondo has worked on sound production for nearly every major Nintendo title since).

“I think we have a show in D.C. in September,” Dupuis offers. That’s Ex Hex’s home turf. Once everything for the show is confirmed, Speedy Ortiz will be playing as support on a hip-hop showcase. The venue is smaller than any her band would normally play, she notes.

The meetup is tentative, but it’s something. The best you can do, let’s say, in the world of touring bands where many of your friends are flung across the country and likely not to be home next time you come calling.

It’s like watching old college buddies that you don’t know reconnect at a wedding, the only difference being that here, those buddies are moderately famous musicians whose records you own. Does that make bearing witness more interesting? The reasonable mind says no. People are people, quasi-famous or not. But the obsessive mind says yes! Two people who make art that speaks to me are in the same room. There is meaning here, I just have to tease it out.

Or, impossibly, it could all be as it appears, nothing more. A slightly-bored Falcone, a camper bathroom we’re not sure if you can poop in or not, a few friends parting ways for now. Business-as-usual, and certainly, for Speedy Ortiz, this is the business. 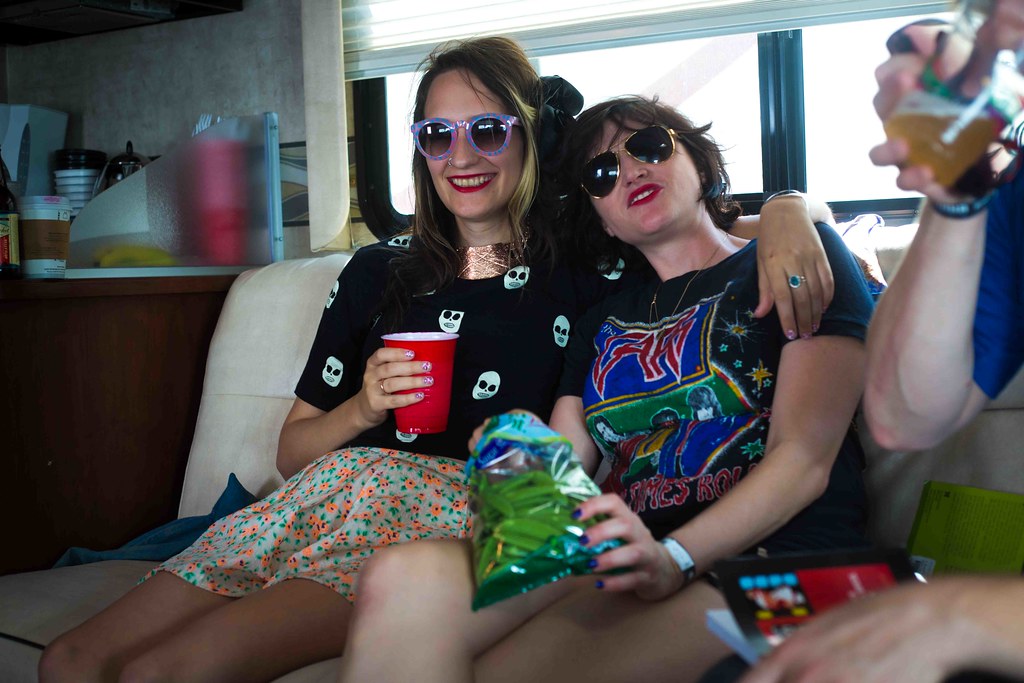 In April, Speedy Ortiz released its second full-length, Foil Deer on Carpark Records to solid reviews and a wave of press surrounding its spring tour. The band has spent much of the year away from home. Speedy Ortiz and its peers, a handful of whom also appeared at Maha, are the latest wave of alternative, ‘90s-influenced bands that have made it to the crucial intersection of expansion and sustainability.

Maintaining relationships, also known as networking, is an important part of holding that balance. Not to undersell the interpersonal, social nature of creating friendships on the road, but you can also file that approach under “Best Practices” for emerging bands.

“I knew Betsy because both of our other bands had played together at this old punk house,” Dupuis says over lunch on Sunday. “When I see bands who just stay in the green room all night and don’t want to meet anyone, what’s the point?”

“It’s also like the easiest networking you can possibly do,” bassist Darl Ferm adds. “All of us can be a little nervous socially. Talking about music makes it a lot easier.”

Every year, the same question emerges surrounding Maha, often before the festival even begins: When (because it seems almost inevitable now) will Maha expand from one day to two?

On the festival grounds, even in the middle of the day, it’s easy to see why people consider it a question worth asking. This is the first year Maha can boast a sellout crowd. It’s hard to find any place within Stinson Park that’s more than 10 feet from another body. And at six years-running, Maha seems here to stay, like it will weather the inevitable burst of the nationwide festival bubble.

Speedy Ortiz soundchecks late in the afternoon on the Javlin Stage. Wavves currently holds the attention of the festival’s largest crowd yet over on the Weitz Stage. Even with the band’s audience numbering probably in the thousands, the beer tent, the line for the ferris wheel, the small street of food vendors, the community village, each swells with its own crowd. 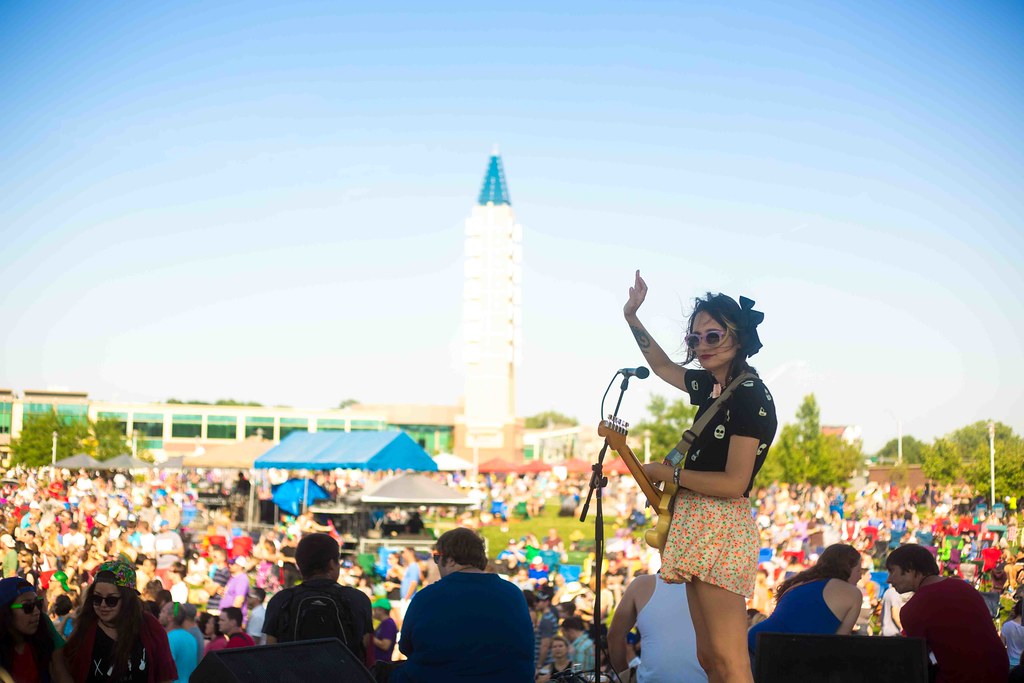 From Wavves onward, each set will draw progressively larger audiences. One Maha attribute is the freedom from decision-making — that is, sets don’t overlap.

Charm, as a quality, doesn’t hold a lot of cool-capital in a self-referential culture. It’s like quaint, that dive bar you hit with your friends (for the experience) in a small town between road trip destinations. Charming is what you smile at sympathetically for that wide-eyed earnestness, happy all the while that whatever city, scene, bar you claim as home is aware enough at least to acknowledge its own endearments.

Yet there’s no denying Maha’s charm, even if by comparison to other festivals. Not only will it never compete with the likes of Sasquatch and Lollapalooza in terms of experience or scale (nor is anyone suggesting it should), Maha exists to justify entirely different qualities of the music festival. Five dollar beers? Free photo booth, ferris wheel and rock wall? Fifty-dollar admission? Okay, when do I get screwed over? Earnestness can also act as an antidote to cynicism.

Maha succeeds, in part, because it’s small and manageable for its ticket-buyers, in no doubt bolstered by its nonprofit status.

So when you talk about growing Maha as the natural next step, now that it has sold out, you’re also talking about the formula that made it sell out in the first place. Can you project your own success without spoiling the good thing you’ve got going? 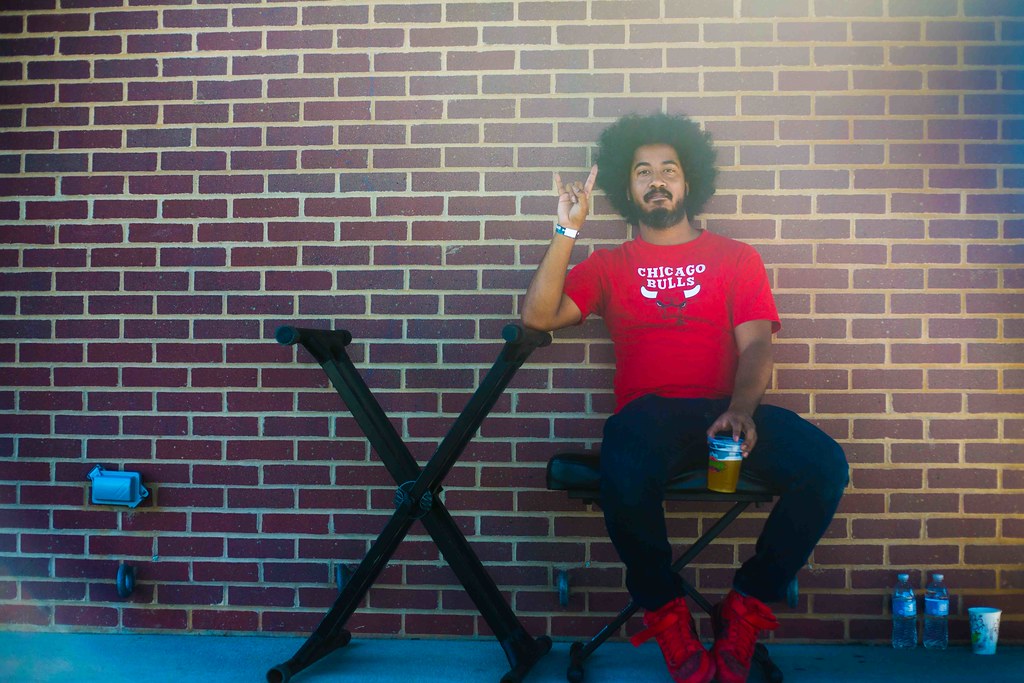 Speedy Ortiz rounded out its Maha experience as the surprise guest at O’Leaver’s later that night on a billing with locals Nathan Ma and the Rosettes, Sean Pratt and the Sweats and Oquoa. Speaking of networking, Ferm pulls up a phone picture of Ma from an Omaha stop in Speedy Ortiz’s basement show days. In the photo, he’s got fistfuls of single dollar bills, donations for the touring band.

By all accounts, Speedy Ortiz packed the small club, which is no surprise. The venue’s capacity is probably several hundred bodies fewer than what the band would draw on a typical tour.

Guitarist Devin McKnight calls the show an intimate yet energetic cap to the weekend. He talks about taking selfies with fans.

“They were looking for Sadie but settled for me,” he says, laughing. 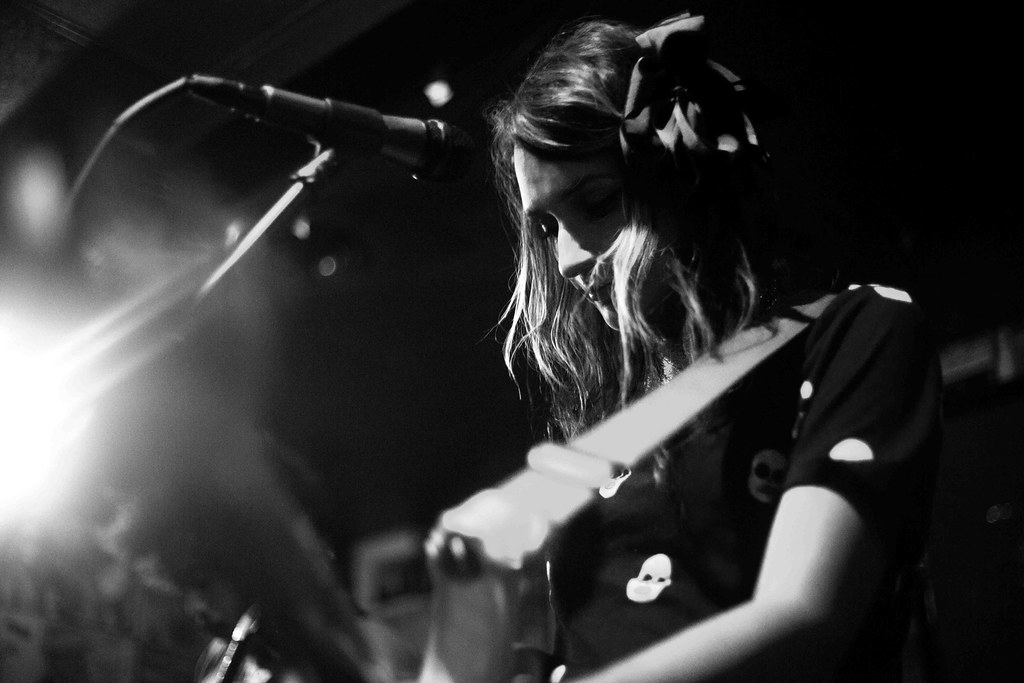 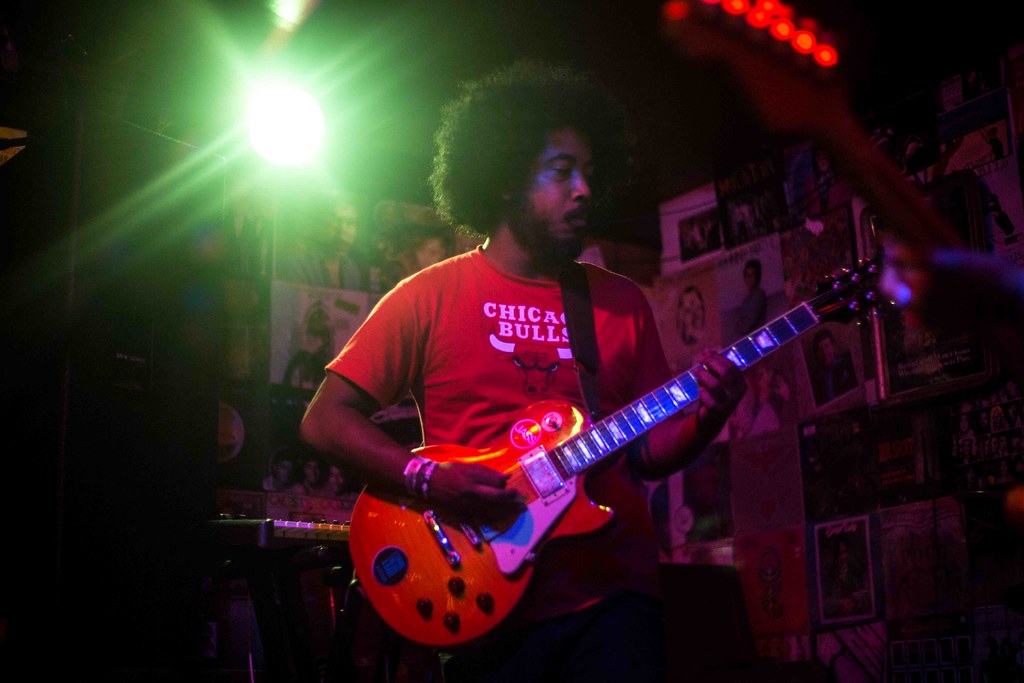 Next to the likes of San Francisco’s Outside Lands and South by Southwest, among others, Dupuis says Maha is her favorite festival the band has played this year.

“With only two stages, everything is really nice and easygoing,” Ferm says.

It circles back to manageability, size and scope. At lunch, Dupuis echoes the sentiment she voiced from stage the evening before: that it’s refreshing to see a festival where the male-to-female ratio of performers is much more equal than the distribution at most festivals. Festivals, she notes, seem to be one of the last holdouts of the old-male-guard among the likes of press, radio and even MTV.

It’s an issue that’s probably easier to stay cognizant of when wrangling 12 bands as opposed to 100-plus.

If you want to think about growth, or even sustainability, these are qualities to keep in mind: the selfies with fans, the proactive lineups, even the charming earnestness. It’s a delicate balancing act. For Speedy Ortiz’s part, they’ll play it conservative.

“We’re super cautious all the time,” Dupuis says. “It wasn’t too long ago we were doing tours that were 70 percent basement shows. We played a big festival yesterday, then an after-show at O’Leaver’s and they were both fun.”

She says, since the release of Foil Deer, they’ve played bigger shows and brought in a little more money, but their approach hasn’t changed.

“A year from now it’s totally likely that we’ll be playing small clubs again. If we do get bigger, cool, but we don’t have expectations.”