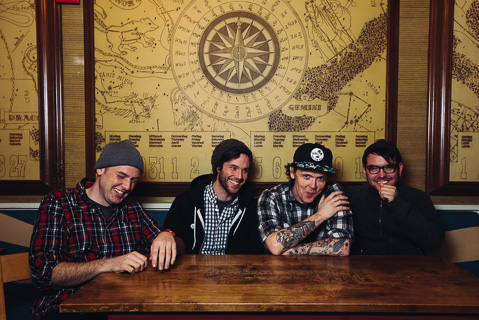 Upon his second invocation of writer Charles Bukowski during our interview, Beach Slang frontman James Alex apologizes, as if there wasn’t a clear reason he keeps returning to the “laureate of American lowlife.”

He relays an anecdote from the 2003 documentary Bukowski: Born Into This. After the writer signs with Black Sparrow Press, editor John Martin asked for his first novel, which Bukowski turned around in roughly a week. Martin was stunned. How could a man pump out an entire novel in such a short time frame?

“There’s this urgency that comes with the moment. If I’m getting a chance to do this thing, I’m gonna do it all the way right now. It’s a fear of having a shot at this thing and not taking [it on] full moxy,” Alex says via phone from his hometown Philadelphia. Hear Nebraska reaches him as he wraps up some band-related design work before embarking on tour that hits Omaha’s O’Leaver’s Thursday, Aug. 27. They’ll play with Eric In Outerspace and Tiny Engines labelmates See Through Dresses (RSVP here).

In a way, Beach Slang finds itself in a moment similar to Bukowski’s, one that’s crucial to its success. The Philadelphia garage rock band — comprising Alex, drummer JP Flexnor, bassist Ed McNulty and new guitarist Reuben Gallego — has sped along at breakneck pace in its 18-month existence. After releasing two EPs within six months (both on North Carolina indie punk label Tiny Engines), the now-quartet sits on the cusp of its first full-length album, The Things We Do To Find People Who Feel Like Us, due out Oct. 30 on Polyvinyl Records (Alvvays, of Montreal, STRFKR).

After years of hard touring and the rough breakup of his former Bethlehem, Pa., punk band, Weston, his current band’s track seems more clear, and Snyder, more prepared. He points to his lyrical writing, which he says has become more revealing since Beach Slang’s inception.

Alex revels in society’s outer fringes. His lyrical cup overflows with references to “accidents, whores and wrecks,” embracing the imperfect or outright flawed. “Part of being alive is being incomplete,” he recently told the Philadelphia Inquirer. That fact doesn’t change, even if conformists or routinists labels society’s outcasts as bums, losers or failures.

“We’ve made peace with that, and for that we feel bulletproof,” Alex says.

On paper, it reads like pontification, as if he stood at the gutter’s pulpit. But the “we” flows from his lips so confidently that one can’t help but believe he writes from the same standpoint as his characters. As he talks about the people he’s met throughout touring — people he refers to as part of “misfit culture” — he literally stands on the outer fringes himself.

“It’s not like a ticker mark in my room where I’m trying to get I’m-a-good-guy points because i accept everybody,” Alex says. “It’s my genuine nature to really feel that way.”

That he feels a kindred spirit with what greater society might call “castoffs” or “weirdos” is another reason why it’s no surprise he mentions Bukowski twice in our 24-minute phone call or why he references the photographer Mary Ellen Mark, whose subjects stood well outside the mainstream. When conventional beauty fails to speak to you, those with interesting stories provide hooks to latch onto.

“[Bukowski and Mark depicted] these characters who’ve lived hard and unconventionally,” Alex says. “Or grand and marvelously, but in a way that they’re an outsider. There’s beauty and something to be celebrated in that courage.”

It wasn’t until Beach Slang that Alex says he made the conscious decision to shed the armor with his songwriting in this way, to write autobiographically about the grit and grime. After Weston split in 2006, Alex figured it was time to pay the bills using something other than his guitar. He attended the Philadelphia Art Institute right in the heart of the city. Anything to ensure he wouldn’t wind up stuck in an office or trudging through sales territories.

Coincidentally, time away from the grind of actually playing in a band gave him more time to spend being a songwriter, his favorite part. He says he wrote stacks of lyrics before Beach Slang, though none of it proved useful itself.

The process led him to “Filthy Lust,” the opening track to the band’s debut EP Who Would Ever Want Anything This Broken. For the first time, the words in his head — always more eloquent to him than what spilled onto the page — felt perfectly imperfect: “I’m a slave to always fucking up/it’s not OK, but maybe it’s enough.”

“That was the first line that felt confessional and honest,” Alex says. “In that moment, I felt like I just got a little bit of my leg into the door of that world, and I’ve just been pushing to break that door down since that moment happened.”

That thread continues through new track “Bad Art & Weirdo Ideas”: “The gutter’s too tough. The stars are too safe,” Snyder sings In his gruff, coarse yell. Again, the speaker stands at a crossroads, not sure in which world to stand — the secure life with a steady paycheck or the one in which he’s still a touring fanatic, sleeping on couches and stringing together meals.

“I still have that same glow inside of me,” Alex says. “It’s all like seeing and hearing things for the first time. I’m in a perpetual state of being born.”

It’s Alex’s energy and positivity in the face of challenge that keeps Beach Slang songs from feeling defeatist and hopeless.

“I love writing about the knockdowns and the bruises and all that kind of stuff, right, but it’s really the uplift in all my things,” he says. “You get knocked down but it’s the get-back-up part that we’re gonna revel in.”