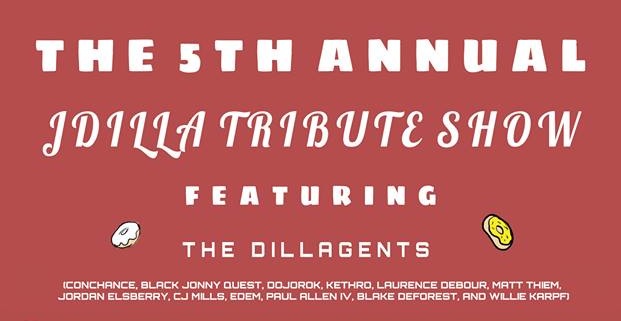 Ask any hip-hop artist about their influences, and chances are J Dilla’s name comes up. The late Detroit producer and beatmaker has left his mark on decades of acts ranging from A Tribe Called Quest and De La Soul to The Roots, Pharcyde and Common.

“Dilla’s sound is now considered timeless and one of most described personalities when it comes to people’s inspiration,” says producer Keith Rodger (aka DJ Kethro). “You can google “interview” with [any of the acts above] and there will be multiple results that describe Dilla’s Genius.”

The annual tribute show was originally hatched in 2011 by Lincoln’s DJ Stryke and Dollar Bill Burton. Their idea was simple: spin some of J Dilla’s best work while fans feast on donuts, a nod to the producer’s universally acclaimed album Donuts, released days before his Feb. 2006 death.

Midtown Marauders took notice of the event, collaborating with its co-creators and expanding it to include live bands and more artists. Rodger says this year may feature the strongest lineup yet, owing in part to J Dilla’s reach.

“Today, we battle so many types and styles of hip hop, but Dilla was so versatile that it doesn’t matter who you are, if you are fan of hip hop, there is a 99% chance that you will enjoy a Dilla production,” Rodger says. “I believe that honoring his legacy is important not only for ourselves but for the people of Omaha to be a reminder what a true producer has done for hip hop.”

Entry to the show is $8, and all proceeds benefit The J Dilla Foundation, created by Dilla’s mother Maureen Yancey to help fund inner-city music programs and provide scholarships to students attending schools that have progressive music curricula (find more information here). Olsen’s Bakery will provide the donuts. RSVP here for the full lineup.

As with all ‘Sights On Sounds’ features, the film screens one time only, this Sunday at 7 p.m. Purchase tickets here.

It is absolutely gorgeous out, so you have no excuse to get out of your house for some live music. Let’s run through a few choices:

The Wildwoods, Root Marm Chicken Farm Jug Band, Sawyer Kreikmeier at Vega – The Wildwoods releases its sophomore album Take A Chance tonight at the Railyard venue. Fittingly, the folk group held its formal release at The Lark in Hastings two weeks ago. The Wildwoods play coffee shops, markets and other outdoor events all over the state — anywhere people enjoy feel-good country — but are still no strangers to the conventional club. It should make for a charming evening. RSVP here.

Oketo, Mesonjixx, Both at Slowdown – The Lincoln indie fivesome releases its second EP I Am Here, You Are Now tonight at the downtown Omaha venue. We published an interview with the band by HN editorial intern Gabriella Parsons, which covered the band’s absence from the stage, the circumstances behind the album’s delay and the stretching of its own creative boundaries. Read it here and RSVP to the show here. Tomorrow night, Oketo plays night two of its release party with Both and I Forgot To Love My Father. RSVP here.

Hector Anchondo Band at Zoo Bar – The Omaha blues outfit heads to Lincoln for the first time since January’s International Blues Challenge, in which it finished as a finalist (which means top eight out of 247 worldwide acts). Huge congrats to the band. We knew you had it in you. RSVP to the show here.

Hey Marseilles with Bad Bad Hats at Slowdown – Seattle chamber pop band Hey Marseilles comes to downtown Omaha, touring in support of Feb. 5 self-titled release on Shanachie Entertainment. Notably, they recorded with Grammy-winning producer Anthony Kilhoffer, who has worked with the likes of Kanye West, Kid Cudi, Rick Ross and Jay-Z. The album is Pacific Northwest indie pop in the tradition of bands like Death Cab For Cutie and The Head and the Heart. RSVP here.

For the rest in a packed weekend, head to our statewide calendar at hearnebraska.org/events. Let us know where you’re headed this weekend in the comments, and hit us up on Twitter and Instagram via @hearnebraska. See you out there.