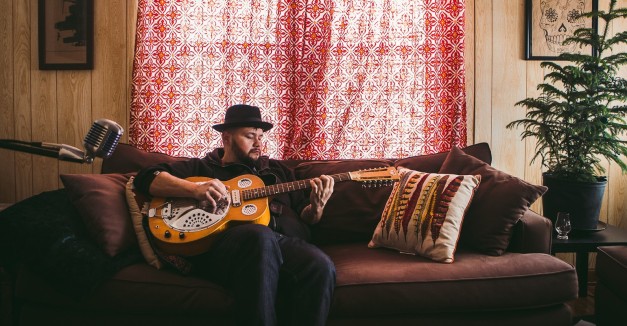 Last year was Hector Anchondo’s first at Memphis’s International Blues Fest, though judging by the bravado and fiery dobro licks pouring from the Blues City Cafe stage, one might have deemed him a seasoned veteran.

And, for all intents and purposes, why not? As a touring bandleader for more than fifteen years, Anchondo has won nearly every major Nebraska award he could be slotted for, including the Nebraska Blues Challenge and multiple Omaha Entertainment and Arts trophies.

Hector Anchondo Band might have seemed cool onstage, but underneath, the proverbial duck-feet were flapping. Maybe it was the time constraints (25 minutes flat) or the logistics (loading in and out in 10 minutes or less) of a massive contest-festival. Maybe it was the Christmas-morning-esque awe at an event stuffed full of the best blues players in the world in a bastion of the genre.

When the band ended its run as a semi-finalist — no small feat — Anchondo realized the effect of all that pomp and circumstance. Judges’ scorecards revealed one flaw across the board: vocals.

“That was a little surprising to me,” Anchondo recalls over the phone from his Midtown home, a bit of the shock dangling from his tone. “I thought, ‘Man, I suck,’ But I was thankful that happened.”

Surprised, possibly, because any time Anchondo has set his mind to progressing his music career, the spoils have come: when he moved from his Salem, Missouri, farm home to Omaha to try his hand at making it a living; when he began touring at age 19; when he met Ludo’s Tim Convy and flew to St. Louis to cut his first blues EP; when he took home top honors at the Nebraska Blues Challenge in 2014, after coming in second the year prior.

All of that led him inexorably to the international event, and the unforeseeable buzz saw he turned into a renaissance of self-improvement.

Once the initial wave of disappointment receded, the natural progression of grief washed away, he started whittling away at the solution. He listened to John Nemeth and other famed blues vocalists. He became a student of Motown. And, perhaps most unlikely, he took cues from deceased pop/soul singer Amy Winehouse.

“She had such control over her voice,” Anchondo says. “It made me curious about what was going on inside her head, what music looked like to her, for her to be able to do what she was doing.”

He channeled those vocalists, which he adored, into his own style, stripping everything back and rebuilding it. After a bit of road-bound soul-searching during a busy 2015 Summer, he spent countless hours researching, analyzing and learning to care for his voice.

“It was almost like I was able to put a magnifying glass on my vocals, dig deeper and focus on the nuances and the most subtle things about my voice,” Anchondo says. “It helped me become the best singer that I’ve ever been in my life.”

Hector Anchondo Band, lead vocalist in top shape, will perform Sunday at the 10th annual Omaha Entertainment and Arts Awards (RSVP here) and once more Jan 21 at a send-off  at 21st Saloon before heading back to Memphis (RSVP here).

This self-making attitude in Anchondo’s ethos dates back to when he was just a boy, growing up on his family’s farm just seven miles outside Salem. As one of six siblings raised by a single mother, he was a regular farm hand, feeding and butchering livestock and rotating chores. His mother, a single parent, would cook family dinners from different cultures and play a diverse blend of music. There were no other latino families in Salem, and his mother wanted to give them a taste of diversity in a place where there was none.

It was there, in a colorless, “all-American” (as he puts it) small town that Anchondo found music. They had no television, save for the occasional —yet dangerous, for the iron deposits — satellite feed. For the most part, he was reliant on word of mouth, and on a tiny instrument shop in town. He poured over John Lee Hooker books, practicing delta blues and “chicken pickin’” style country licks for hours in isolation.

In 2001, at age 19, it was time to pursue his professional music dream. After laboring over his decision among cities like Los Angeles and Chicago, his mother convinced him that Omaha, their former home, would be the best starting point. It turned out to be a worthy home base.

“Actually, Omaha turned out to be the best move ever,” Anchondo says. “When I was younger and I started touring and traveling, I realized pretty quick that our area has something really special.”

The next 10 years, would take him all over the country. He went to SXSW in 2001 with his first band, Anchondo, playing a mix of latin, reggae and rock mixed with blues-flavored riffs. When the band fell apart in 2010, Ludo‘s Convy hit him up. Anchondo had been playing with blues band Burgundy and Gray, and Convy invited him to St. Louis to record.

That December, Anchondo wrote 30 blues songs before flying to went through pre-production and slashed the list to five songs for Kickin’ Up Dust.

“Everything felt right,” Anchondo says. “Everything aligned. This is the way I should be going.”

It’s here that his plan comes into focus, and what seems lofty or damn near impossible to some sounds now like a foregone conclusion. He talks about reintegrating Latin music into his work, but not until he finishes the blues album he’s currently demoing at home. That would make three with the Hector Anchondo Band — including 2014’s Young Guns — and by then he’ll be ready for the next challenge.

Maybe it’s an indication of how the blues community works, that he doesn’t feel like he can divert from the traditional path until he’s been entrenched. Maybe the vicious scorecard yields that attitude.

Either way, he’s extremely nonchalant, bordering on assuming, about making it in the blues world. He doesn’t seem to envision a life where that isn’t the endpoint. Attribute that to his own self-inventing if you like, but it’s all mapped out.

When he returns to Memphis at the end of the month, it won’t be so daunting. That glint in his eye, the wonder of a child, the awe of a sports team reaching the championship for the first time, has turned into confidence, readiness and focus.