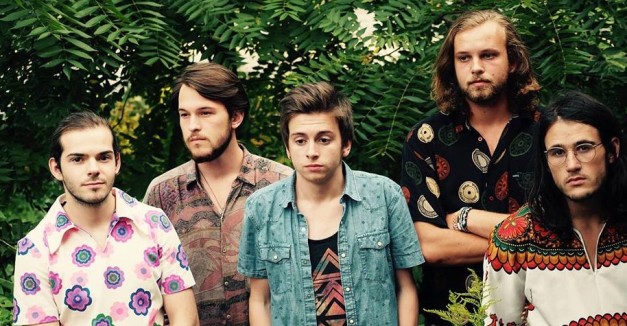 It’s Sunday morning around midnight, and the party just got a little quieter.

Some people are sound asleep, others with no concern for the time or outside world. The five bodies that make up Oketo, however, have just slipped out the door.

For the past six months, the Lincoln psychedelic indie-rock band has scurried across town each weekend from 1 to 4 a.m., delivering the Sunday morning paper route.

Just as they’ve been unseen in the dimlit morning hours, Oketo has been absent from the stage, instead working on their newly released album, I Am Here You Are Now. This weekend, at release shows in Omaha and Lincoln (RSVP here and here), the fruits of both labors will finally see the light.

The same hands that roll up stacks of weekly newspapers have been working diligently on the record, practicing daily in a windowless studio above O Street’s Game Room. It is in this space that Oketo’s furtive pursuit has been bubbling under the unseen surface for the past nine months.

It’s also where I met with frontman Steven DeLair just days before the weekend release shows to talk about the long-awaited album.

The act of releasing an album after months of mysterious silence just weeks before they leave on tour, has people wondering where the band has been, and where they intend to go from here.

“Where have I been?” DeLair repeats back to me, quietly searching for the answer. “Hm, well, I’ve been here. But before that I– I was living in a shoebox.”

“A shoebox?” I probe DeLair.

To shed societal constraints is perhaps what inspired Oketo’s new record. In a world that’s constantly telling people how to live and act, I Am Here You Are Now is a testament to truthful living. The album drops its listeners in the present moment, its lyrics an ode to being oneself in the face of fear. It’s a journey into the hungry lives of Oketo, a band who explores what it means to live without stopping to wonder what people think.

The record contrasts instrumental and lyrical progression. In its title track, Oketo manages to present ideas of delusional societal expectations in a danceable fashion, with lyrics that say ‘Love is lost in our liquid nation, Your money hungry over saturated.’

From start to finish, the album is a humanistic approach to standing up for oneself and one’s art. Ideas that scream ‘I’m too much, but not enough’ are reflective of a young and fearful culture, allowing this album to undoubtedly resonate with its main audience.

“It’s like looking inside yourself,” DeLair said of the album. “Feeling, embracing, breathing. Moving on with natural progression of life. Just being.”

Some songs on the album are more personal and emotional than others, such as “Vogene” which DeLair wrote during Oketo’s recording of their self-titled EP back in 2014.

What appears to be a love song, and is in fact named after DeLair’s partner, “Vogene” is more broadly a reflection of life’s natural rhythm. It’s about relationships that flow in and out of our lives, how some can be more difficult to let go than others, but how it’s necessary to know when to put ourselves first.

“The most important relationship is the relationship you have with yourself, and knowing who you really are,” guitarist Brandon Elwell said. “It’s kind of the theme of the record.”

While the record explores concepts of human connection, it is without question that the audacious absence of Oketo has left their audience feeling disconnected in the recent months.

While the record has been in the works since last August when the group started recording with Sean Joyce (Sean Joyce Audio), some songs date back to even earlier developments, like the intro to “Simple Sound,” a bit they’ve been playing live for over a year. After tracking the album, Oketo took it to another producer — who chose to be unnamed for this story — to finish the mixing process. 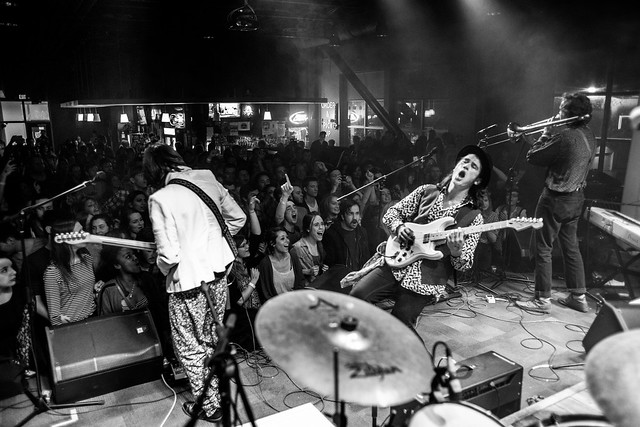 However, the record that dropped last week was well worth the band’s silence. I Am Here You Are Now is a search for light in the darkness. It represents the confinements of a box in which DeLair once resided, but could never quite fit in. It’s about gaining the courage to step out of society’s self-deprecating darkness, and to ultimately know and love yourself.

The world outside of the mundane was waiting with open arms, DeLair said. Oketo has no plans of returning to the shoebox that keeps creativity in a four-sided figure, the group more curious than ever to explore the possibilities that exist beyond Lincoln’s premice.

At the end of the month, Oketo will take off on a three-week tour that will start March 1 in Denver and end in Austin, Texas, for the Nebraska SXSW showcase. Beyond that, the group plans to travel to places wide and unknown.

“I am looking for a place where there are ideas that don’t exist here,” DeLair said.  “I’ve been here my whole life. I feel like I really need to move on and see, and live somewhere else. Go somewhere where I am going to be completely immersed and challenged. I’m really excited to move and see elsewhere. I love Lincoln, but the world is so big.”

While Oketo has been, in their own right, somewhat inconsistent in the past, the growth of this band to the present has come stunningly full-circle. The group that once thrived in the familiar, now seeks the unknown. Oketo is nothing less than a fruitful formation of friends who’ve committed themselves to their art at all costs. Even if it means getting up at 1 a.m. every Sunday for the morning paper route to scrape up some extra cash, Oketo never fails to show up for the moment.

“I left the shoebox,” DeLair said. “When that happened I saw something that was very beautiful and bright, and said ‘Hello, I love you.’”

[Editor’s note: This story has been edited from its original form.]