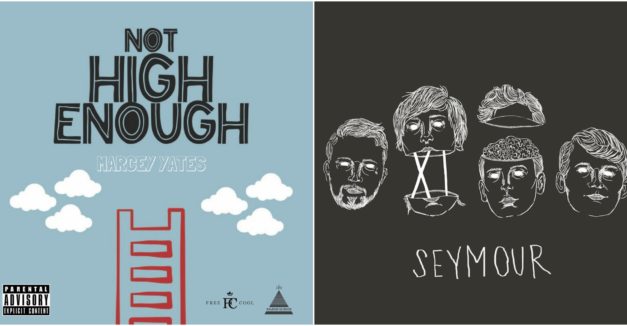 Though the end of the year is here — and with it, those ever-earlier end-of-year lists (we’re already guilty) — Nebraska musicians continue to file entries into the state’s musical catalog.

With an already prolific 2017 under his belt, Omaha emcee Marcey Yates dropped solo mixtape Not High Enough last week through his Raleigh Science Project collective. Yates must be feeling it after multiple Dilla Kids releases in the past 12 months; the 12-track tape features the vintage, soul-based samples over which he continues to refine his delivery, which here packs a wave of socio-political commentary.

While the title hints at the current fatigue-inducing news cycle, Yates says it also refers to the endless grind of reaching for personal goals.

“‘How high do  have to go to reach the success I want?’ It seems endless at times,” Yates says. “I have been steady climbing but you look down and look and say damn not high enough to escape not being free or the negativity.”

Listen to “Laundry Day” below. Not High Enough is available via Bandcamp here.

Lincoln indie rock band Seymour has also had a busy year, releasing X1, its second EP of 2017, earlier this month. Oozing with the depressing humidity and dreamy lethargy of summer, the band’s latest effort is an apt companion to its debut They Live and a potential reprieve from winter’s dark days.

Listen to “Fade” below. X1 is available via Bandcamp here.

Rounding out today’s release round-up is Lincoln musician Jesse Elsener, who has dropped his first solo album Opportunity Knox under his drag name Jessica Knox. The Producers of the Word guitarist explores his experimental, “love of Brian Eno” side with this record, comprising largely instrumental tracks from the past eight years. Elsener explains the impetus for his releasing music now.

“I came out at the beginning of 2017. I’d always wanted to do Drag, but I was never a dancer and don’t even do karaoke much less lip synch. So I decided to incorporate my drag into live music performance I do with Producers of the Word. It was nice to find a place for it. In doing so, I noticed many popular Drag Queens release albums. But of all of them I think Trixie Mattel is the only one actually playing instruments. And her album is one of the few that isn’t just pop music. She released a country album. So in looking at my backlog, I decided there should be s weird, psychedelic Drag Queen album also.”

Listen to “Very Emotional” below. Opportunity Knox can be found via Bandcamp here.

It’s somewhat quiet early this week before the end-of-year shows kick in, but that doesn’t mean there is nothing going on. A few picks below with more at our statewide calendar here.

Hear Nebraska FM on 89.3 FM KZUM – Monday means HN FM takes over the KZUM airwaves from 8-10 p.m. CST with DJ Stellmoney (your columnist) and the latest and greatest in Nebraska music. Tonight, it’s the winter show, and while my partner in holiday crime, Rebecca Lowry, will be physically absent, she has gifted us with the festive cuts that’ll warm your frosty heart. Tune in to hear the likes of Jus.B, Kyle Harvey, Belles & Whistles, Andrea von Kampen, Bright Eyes, Evan Bartels and more. That’s 8-10 p.m. on 89.3 FM in Lincoln or kzum.org and the Tune In app around the world.

Clarence Tilton, Sack of Lions, Matt Cox at The Waiting Room – An all-local country lineup fills The Waiting Room Tuesday night for what doubles as a coat drive for Heart Ministry. Clarence Tilton has a new full-length album on the cusp of release, so expect to hear new music; for one, listen to “Saccharine Whisper” below. 8 p.m. show, all-ages, entry is $8 or free with coat donation. RSVP here.

‘Tis The Season to Rock the Season at The Waiting Room – Omaha cover band Superman’s Hero hosts its fifth-annual Christmas Charity Show with the George Heaston Experience and indie rock band About-Face. While the band has planned a holiday cover set, patrons will be able to request songs for a $5 donation to the Make-A-Wish Foundation (plus, you’ll get to see HN intern Johnny Murray throw down on stage). 7 p.m. show, all-ages, $10 suggested donation, RSVP here.