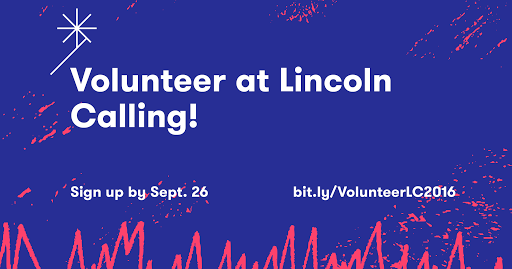 Lincoln Calling is a nonprofit music community event, and as such, we can only accomplish it with tons of community participation. To that end, we’re looking for dedicated volunteers to help run this year’s three night festival.

Apply here no later than September 26 to volunteer for Lincoln Calling. In exchange for your work, you’ll receive one three-day general admission pass, one t-shirt and the opportunity to help grow a nonprofit festival.

Nonprofit festivals around the country rely on a strong volunteer staff to help make them possible. We recently told the story of Maha Music Festival through the eyes of its volunteers (read it here). Treefort Music Festival also runs almost completely because of volunteers, as shown by this story from Boise State Public Radio.

Individual jobs will be assigned as needed for work pre, during and post-festival. Positions include site build/tear down, merchandise, ticketing, hospitality, stage crew, security and more. Applicants must be 18 years of age by October 6, 2016. Read the document describing duties and conditions here, and send any questions to volunteer@hearnebraska.org

At 6:30 p.m. Monday evening, the last of KZUM’s Fall Fund drive, General Manager Kerry Semrad sat behind soundboard inside the Lincoln radio station’s 48th Street studio. Across the room, an easel facing back at her stated a running total of $38,824.58 — just shy of KZUM’s one-week $40,000 goal.

Then a few phone calls came in, as well as a stream of online pledges and even one walk-up donation, who pounded on the office door for a startling moment before Development Director Shannon Claire, who was also present, realized what was going on.

By 8 p.m., there was cause for celebration.

KZUM reached its Fall Fund Drive goal in the campaign’s waning hours, setting a one-week station record with $41,784.31 while pushing it closer to its annual private fundraising requirement of $300,000. Meeting that baseline would qualify the station for federal funding from the Corporation for Public Broadcasting, which accounts for 25-percent of the station’s annual budget, through 2019.

“I never doubted the loyalty that this community has for KZUM,” Claire says. “We believed in our listeners, near and far, that if we put [the station’s need] out there, our listeners would come together. “

The successful fund drive was the culmination of a year of hard work and stress over the looming September 30 fundraising deadline. Over the past couple of years, the CPB had increased the minimum amount a station must raise privately to qualify for matching funds from $175,000 in 2014 to $300,000 in 2016. Meeting the federal body’s new requirement would take an unprecedented effort.

“I just can’t quite wrap my head around the support we feel,” Semrad says. “It’s a daunting task to see that huge number looming. I could see the worry on our volunteer’s faces.”

While projections put the station’s fundraising above the $300,000 goal, nothing is official until a CPB review confirms, likely sometime in early 2017. Still, staff remains motivated to ensure the mark is reached.

“Our underwriters and donors came together and rejuvenated the staff and volunteers of KZUM.” Semrad says. “I think we’re all in awe. It honestly just makes me want to work harder.”

KZUM now looks ahead to 2017 programming while working to finish 2016 strong. Semrad sees the fund drive’s success as a community endorsement, which leaves her optimistic.

“Lincoln just showed KZUM how much the station means to them and that puts a big responsibility on our shoulders,” Semrad says. “KZUM has been lifted off of shaky ground, for now. In my mind mind, we can put the effort back into the community.”

Thanks to the Daily Nebraskan, which featured our collaboration with Zipline Brewing on next Saturday’s Beer Nebraska concert. Reporter Margaret Davenport spoke with Zipline’s Craig Reier about the partnership and with Better Friend’s Caleb Wiedel about the beer Blue Blood Brewing has created for his band. Read the story here.

A note of interest: Cursive announced via its Twitter page that the band’s original drummer Clint Schnase will play the show. His last studio album with the band was Happy Hollow, which just turned 10, and which will be commemorated at Beer Nebraska by Zipline’s “Hoppy Hollow” session IPA.

Omaha dark pop singer/songwriter Cat DeLuca released the final of three videos from her The Unloved Kids Club EP yesterday. This one, for the title track, compiles live footage, video outtakes and thematic elements from her prior two videos. The track itself possesses a more upbeat danceable bounce and a smouldering chorus.

The Unloved Kids Club dropped in early July. DeLuca worked with Icon One producer Alfonso Jones, and it shows the most on the title track. Read an HN review of the album here.

Watch “The Unloved Kids Club” below:

Find a fuller listing of this weekend’s events at our statewide calendar here. If you do not see your show or one you plan to attend, list it in the comments, email news@hearnebraska.org or add it yourself here. Use that same email for all news tips, story ideas and new music alerts.