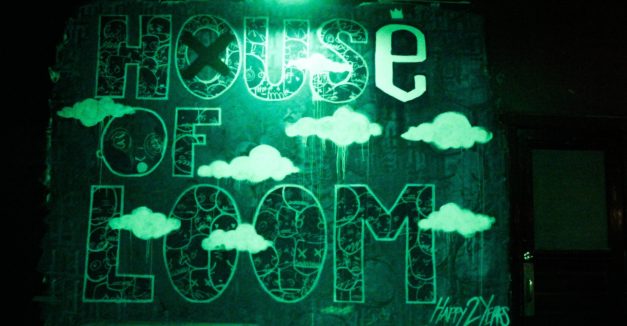 For the past five years, House of Loom has thrived as a home of a once monthly pop-up dance event ‘loom’. It will be bittersweet, then, when partiers ring in 2017 at the nightclub’s New Year’s Eve celebration.

House of Loom will close at the end of the year, the Omaha dance club announced yesterday. New Years Eve will be the nightclub’s final day of business, according to the statement.

“We’ve always called House of Loom a social experiment, and we believe we’ve accomplished everything we wanted to in that space,” the statement says. “Nightclubs are a finite business model, so we decided it’d best (and more fun) to go out with a bang.”

In 2011, ‘loom’ arrived at 1012 S 10th St, where it has hosted dance parties, DJs, bands and other programming while celebrating diversity and promoting progressive causes. Recent series have been geared toward inclusivity, developing artists and education.

The announcement comes during the week of its fifth anniversary, after which regular programming will continue through the end of 2016. After that, it’s staff will sporadically produce events at rotating host venues, in the spirit of loom.

Chicago DJ Ron Trent will perform for House of Loom’s five-year anniversary party this Saturday, Sept 17. DJ Brent Crampton will open the event, which is hosted by Jay “RhythmSOULdier” Kline and features BBQ by House of Bah. Cover charge is $5 from 8-10pm, $8 from 10-11:30 and $10 after. RSVP here.

Watch our video feature on loom’s 10 year anniversary below:

Following the band’s sophomore album Take A Chance, The Wildwoods have released a new video for a track which will appear on its follow-up.

“Change The World” dropped last week via the band’s website. Filmed by videographer Brent Scott Maze and recorded with Lucas Kellison, the track shows off the band’s indie folk side in an intimately lit setting.

The track will appear on The Wildwoods forthcoming album, which the band will begin recording in November with producer Ben Brodin at ARC Studios. Watch the video below:

Lincoln folk/rock band Bernardus will take to the road for its first tour this month, traveling through the Midwest, South and East Coast over the course of eight weeks. It will do so as an acoustic duo, with Ben and Jake Kramer starting the tour together before Jake swaps out for a guest musician.

Ben will play 56 shows in all, which is a huge total for a debut tour. He says he hired a booking agent, filling the calendar to benefit them financially and with transit times between venues. He says going light for this first trip should help them feel things out.

“For our first couple tours we decided it was best to test out the waters by only doing two guys,” Ben says. “We have plans to tour as a full band in April, but for now we wanted to play it safe.”

Ben and Jake have long performed as a duo, bringing in drummer Adam Kovar, bassist Matt Cornell and keyboard player Christian Hale about a year and a half ago. Bernardus released its debut self-titled EP in May, and will kick tour off as a full band this Friday at Vega. The Wildwoods, Pleiades & the Bear and Lauren Bydalek open the show, which is all ages and starts at 7 p.m. RSVP here.

View the complete tour listing here. Watch the video for “Asleep,” the closing track from Bernardus, below:

Tonight, Minneapolis punk rock band Off With Their Heads plays Lookout Lounge, 320 S 72nd St. With guitarist/vocalist Ryan Young anchoring a rotating cast of players since 2002, Off With Their Heads has produced countless singles, EPs and splits on top of three full-length albums (most recently 2013’s Home) and three live albums. Young also runs the Anxious and Angry podcast, which features interviews with musicians, comedians and writers and focuses on mental health issues.

A pair of Omaha acts in hardcore band Stronghold and pop punk outfit The Ridgways round out the bill. The all-ages show starts at 8 p.m. and is $15 to enter. RSVP here.

Also tonight, Chicago’s The Hood Internet and Show You Suck play Vega, 350 Canopy St. The former is one of the most recognizable names in mashup, bursting onto the electronic scene via blog in 2007. The duo of Aaron Brink (ABX) and Steve Reidell (STV SLV) made its way into the studio in 2012 to record debut album Feat, which included the likes of Black Moth Super Rainbow’s Tobacco, AC Newman, and Kid Static. The show starts at 9 p.m., costs $15 and is 18-plus. RSVP here.

Find the rest of tonight’s show and beyond at hearnebraska.org/events. If you do not see your show or one you plan to attend, email us at news@hearnebraska.org, add it yourself here or leave it in the comments.