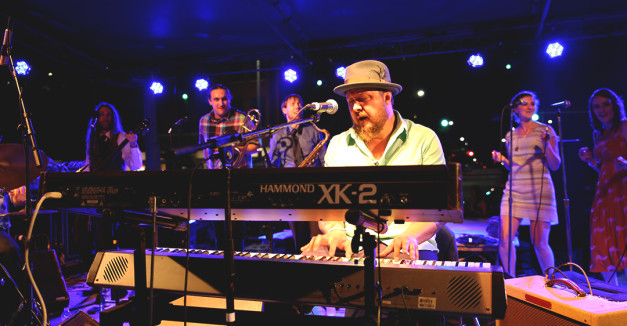 It’s been a good year for Lincoln and Omaha bands striking out on tour. Universe Contest, See Through Dresses and AZP have all hit the road. The Faint, of course, did a massive national tour in support of their new album.

Josh Hoyer and the Shadowboxers have played out of town, too, but they’re about to ramp up touring efforts even more.

The Lincoln ensemble is finalizing a very significant Western US tour for the late autumn. They’ll kick off the trip with a Nov. 7 album release show at the The Bourbon. Then, they’ll hit 16 stops in Idaho, Montana, Oregon, Washington, California and more before returning to the Zoo Bar on Nov. 27 for a Thanksgiving celebration.

After releasing their wonderful self-titled debut in January, Hoyer and company have a had a great year, drawing a massive crowd at Lincoln Exposed and headlining ZooFest, as well.

Looking ahead to the fall, Vega announced a few big shows yesterday.

Reptar plays on Sept. 17. The Athens, Georgia band hasn’t had a release since 2012’s Body Faucet, a jangly, southern-fried alt-rock record that sounds as similar to Vampire Weekend as it does Of Monsters and Men. Reptar recently joined The Faint on a national summer tour in support of April’s Doom Abuse.

Then, Shabazz Palaces comes through on Sept. 21. Released on Monday, Shabazz Palaces will tour Lese Majesty, a follow-up to 2011’s Back Up. The album, divided into seven suites, departs from the band’s original soul-driven synth sound into something much spacier. Read the Pitchfork review here.

Finally, Brooklyn’s Beach Fossils plays Vega on Oct. 1. On 2013’s Clash the Truth, the band found a tempered, distorted slacker sound, like an acid-washed Joy Division. The band will appear with Heavenly Beat and Axxa/Abraxas.

Tonight at Turner Park in Omaha, Skypiper and LIFE is COOL play the inaugural Live at Turner Park concert from 6 to 8 p.m. We’d really like to see you there. The weather is supposed to be pristine, so it’s a perfect night for picnic dinners. Free show, of course. We had a nice time talking to the two bands earlier this week to preview the show. Read the Q&As here.

For the next four Wednesdays pairs of bands will appear at the Midtown Crossing park, looking forward to Noah’s Ark Was a Spaceship and Snake Island!, AZP and Both, The Bottle Tops and Travelling Mercies.

The second annual Love of Art and Music Festival (LOVAM) goes down this Saturday and Sunday at the Metropolitan Community College Fort Omaha Campus.

The North Omaha festival features cultural, health and art displays and activities for children and families. There will be musical performances by Soul School (from Denver) and Atlanta visual artist Ansel Melvin Butler will showcase work.