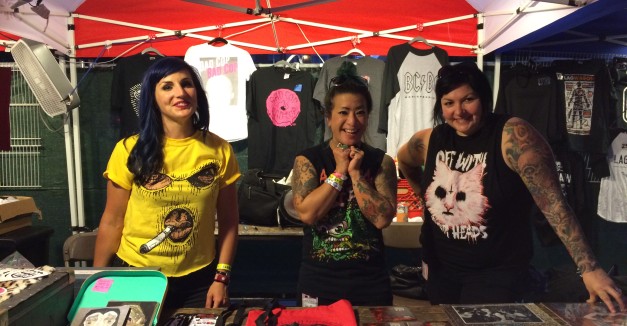 At seemingly every Fest 14 merch booth last weekend, the tip jars were designed to connect with you.

“Tip me so I can move to Japan,” one jar pleads. “Get tips or die tryin’,” another mercilessly puns. A third makes a crude joke about how much of the tip is to be deposited.

If you smile, you’ve relaxed. If you’re relaxed, it becomes easier to make a personal connection. When that person is also holding the rad Bad Cop Bad Cop t-shirt you want, the rest is cake.

“Sometimes I gotta prod people,” says Nebraska-native Mitch Cady, standing over a suitcase of Cicada Radio gear. “Mostly, I just try to feel them out.”

“[I try to] be friendly, be open, mingle and get to know people,” says The Copyrights merch runner Ashley Morrison. “It’s like a community.”

For touring bands, merchandise sales are an economic activity at their center, often an integral part of both promotion and sustainability. Though that was no less true at Fest, it is also undoubtedly a social activity at heart.

Talk to any merch booth occupant, and most only want your money if you want to give it to them. What they’re really excited about is sharing the atmosphere and camaraderie. Put in terms of that Menzingers record you’re clutching: “I don’t wanna sell something to someone that won’t rock it.”

Like any job, motivations for doing it span the spectrum. It’s career for some, whether band members or professional merch salespeople. Some have been friends of their respective bands for years, selling their buddies’ wares to help out. Others need a release from the hustle and stress (or mundanity) of normalcy. Many are in it for the Fest pass. And for more than a handful, the punk rock community is all they’ve known.

Whatever the drive, not a single person failed to espouse the joys of merely existing at Fest. It is one huge, sweaty, pounding familial gathering. Punk fans come from as far North as Canada and as far East as Germany to a (mercifully gameless) college football town to hang out with their friends, scream along with their favorite bands and sweat out the problems of daily life. That goes for everyone, musician or not.

And unlike other festivals, the corporate overtures are absent. No one is trying desperately to sell you anything at Fest, except for maybe a PBR. Writing “Tip me if you have ever been personally victimized by Regina George” on a plastic tub won’t induce anyone to fold out their wallet for a t-shirt. But it will make them smile.

Throughout The Fest’s riotous three-day-weekend, I attempted to pull back the curtain on the merchandise stand. I spoke with first timers and touring veterans, hired hands and band members themselves to find out what life is like behind the merch table, their sales pitches and what drives them to take on a thankless part of touring life.

Editor’s note: many of these were posted via HN’s Instagram as they were collected. Some, however, are newly published.

Jesus Martinez with The Menzingers

“Honestly, I don’t wanna sell something to someone that won’t rock it,” says Jesus Martinez, The Menzingers merch runner. “Tip me so I can move to Japan,” his tip jar pleads. Martinez is helping friends while saving money to fuel his love of travel.

Mike Bachich has been selling merch for mewithoutYou for four years. Best story? “I had someone buy an LP and tear it in half in front of me.”

“I’m doing it by necessity, because I don’t know what I’d do with myself,” says Tom Hussey, temporary Worriers merch salesman. He’s charismatic and charming, but it’s also a limited run until his band, Personal Best, plays Sunday. On his interaction with customers: “I’m trying to help them through the day.”

“I’m doing this for a Fest pass.” Perry Wesley plays in the Kentucky band Messes, but he’s here slinging merch with Knoxville’s Lions. The two are tour buddies, and played with Bed Rest earlier this year in Omaha. We talked Good Living Tour a bit, and the oft-neglected parts of his home state sound a lot like ours. “People give a shit about music, but it’s hard to get shows going.”

Hey, it’s Lincoln native Mitch Cady! The Desir Decir drummer is in Gainesville with his Jersey pals Cicada Radio, and like me, it’s his first Fest. “I hate high pressure sales stuff,” Cady says. This has been the common denominator thus far. Cady says he’ll latch onto something his customers get excited about and use it to help. “Sometimes I gotta prod people. I just try to feel them out.”

Ashley Morrison with The Copyrights

“It’s my release,” says The Copyrights merch runner Ashley Morrison. “I offer to do it every year. They don’t have to ask.” This is her ninth Fest, and coincidentally, her ninth year as a nurse in a cardiac unit. All that stress has to go somewhere. On her philosophy: “Be friendly, be open, mingle and get to know people. It’s like a community.”

The HN team met Krista Crabtree the night before this photo, unbeknowest to us she would be working behind the table for Andrew W.K.’s Sunday night headlining show. Crabtree is somewhat of a hired gun, having worked for various bands since Fest 6 (eight years ago). She says the money is good, but she’s mostly here to see her really good friends, and to have a little fun with it. “Do you wanna try this on? It looks great on you.”   * * *

Mike G has been on the road with PUP for roughly two years, soaking up the small towns of the states and their voracious appetite for touring bands. He cites Gainesville and Greensboro, N.C., for instance. “People are really willing to put themselves out there.” Mike has been going to shows for roughly half his life, and says that one of the biggest things a fan can do is hand cash to a band. It gets them through tour. Even further, it feeds crew members like him. Tipping isn’t a thing in Canada, and the benefits of that custom here aren’t lost on him. “I remember when I was 13 years old, buying merch from a grizzly guy like me. It’s all full circle.”