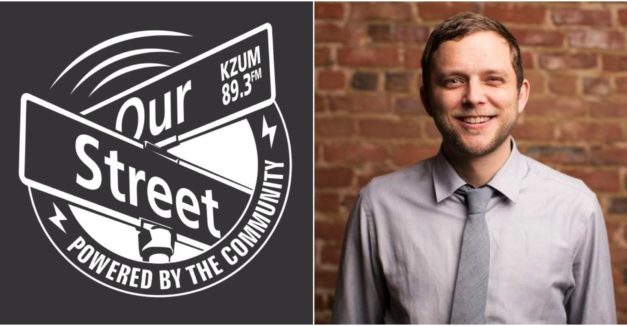 With Lincoln Exposed happening all weekend downtown, it seems a perfect opportunity to talk about the state and strength of its music community.

Our co-founder/executive director Andrew Norman joined KZUM’s Our Street for a two-part interview published via the nonprofit radio station’s website. After introducing himself, Norman talks about Hear Nebraska’s creation, its historical and contemporary focus and its programming/concert philosophy. They also get into Lincoln Calling, maximizing the city’s resources and how to continue growing the scene.

Listen to both segments below:

The school is in turmoil due to high principal turnover. The cause? Its students love rock music. Though underhyped at the time of its release, Siskel and Ebert reviewed it favorably as the perfect Midnight movie.

“The film is raucous, fun, and delightfully out of the realm of possibility,” writes Film Streams education director Diana Martinez in her film notes. “Though the protagonist, played by P.J. Soles, is an important component of the film, it is undeniable that the appearances by The Ramones make the film unforgettable.”

Lincoln Exposed rolls on in downtown Capital City — check out Wednesday and Thursday coverage — but don’t overlook what’s going on the rest of the weekend. It’s supposed to be nice, get out there. And check out a fuller listing at our statewide calendar here.

Tonight, Brooklyn pop/rock band Landlady comes to O’Leaver’s and will perform with Thick Paint and Sam Adam Martin. The brainchild of songwriter Adam Schatz, Landlady recently released its soulful new album The World Is A Loud Place on January 20. It’s lush with funky horn, string and keyboard arrangements. For Thick Paint, it’s their first full show with a full lineup. I hear talk of dual percussionists … this one should be interesting. 9:30 p.m. show, $7, RSVP here.

Tomorrow night, The Commons LNK hosts Rock Against Rape Culture, a benefit for Voices of Hope featuring Bien Fang, The Morbs, The Boner Killerz and Once A Pawn. Music starts at 8:15  p.m., immediately preceded by a presentation and discussion with a Voices of Hope representative at 7 p.m. Organizer Rachel Tomlinson-Dick spoke with HN about the event; read the story here. $5 suggested donation beenfits Voices of Hope and their continued mission to empower those who have experienced relationship violence, sexual assault and related forms of abuse. RSVP here.

Sunday night, New Zealand pop duo Broods plays The Waiting Room with singer/songwriter Calum Scott. Siblings Georgia and Caleb Nott released their sophomore album Conscious on Captiol Records in June 2016, and like its predecessor, it charted Number-1 on the New Zealand charts. The band was thrust into mainstream success just a few years ago, channeling the experience into its punchier latest album. Doors at 7 pm, $15 advance tickets, all-ages RSVP here.