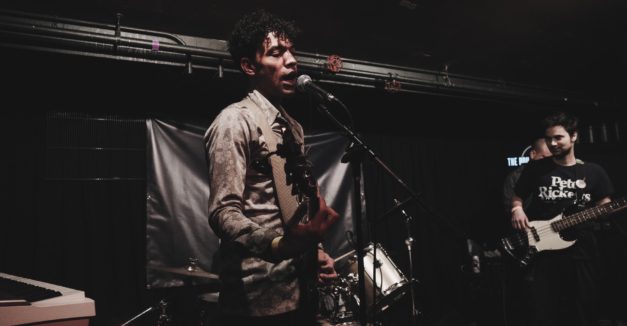 [Editor’s note: HN’s editorial team is covering Lincoln Exposed all weekend. Check out coverage from night one below and stay tuned for more tomorrow. RSVP to the festival here.]

The Familiar Firsts and New Identities

A festival as dense as Lincoln Exposed always has the potential to develop throughout its duration in feel and atmosphere, and it’s fair to say this particular one is historically at its best when it does so. However, at its outset, there is always room for a little familiarity.

Exposed managed just that on a cold first night, with its core three bars — Zoo Bar, Duffy’s Tavern and The Bourbon — all staging opening acts in line with the sound a seasoned local concertgoer might typically encounter at each.

The honors belonged to Americana-rock band Prairie Psycho, who played to a very relaxed early-evening Zoo Bar atmosphere, playing tunes with a literary bent that sounded like Elvis Costello and The Ramones had started a Honky Tonk band. Tupelo Springfield followed with a psychedelic, folkish bag of tricks. Both bands once again made the blues bar a nice place for early arrivals to dip their toes into the festival waters. 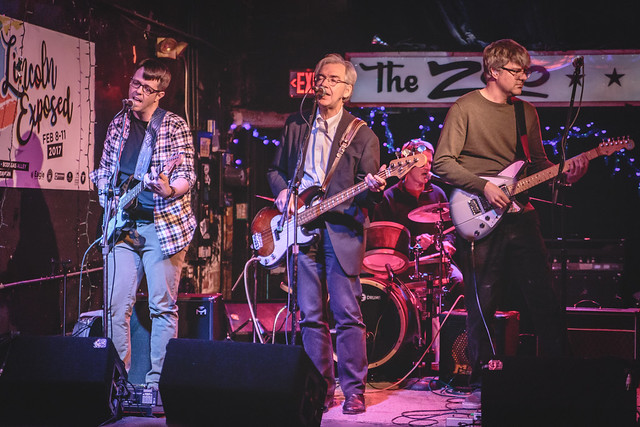 From there, it could have been a regular night for any of the ensuing acts. King Thumper filled The Bourbon’s front room with Justice Strong’s molasses-thick guitar riffs and distorted vocals, Alex Steele’s chunky bass and drummer Caleb Wiedel’s marching rhythms. Jam trio Cornerstone Dub fit right in across the street with Bodega’s favored roots/reggae mix. And though The Renfields play less and less often, Duffy’s Tavern felt an apt spot for the beloved indie rock band. 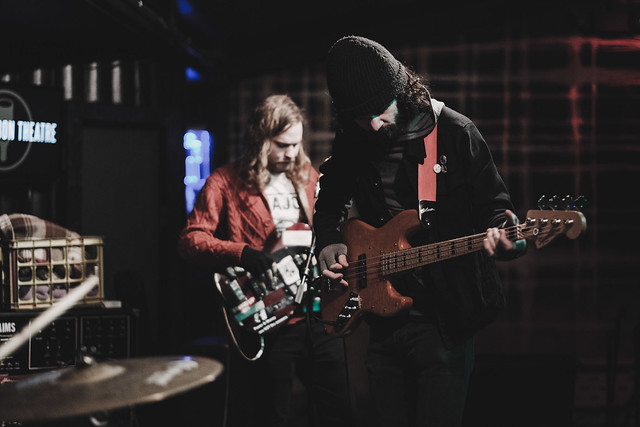 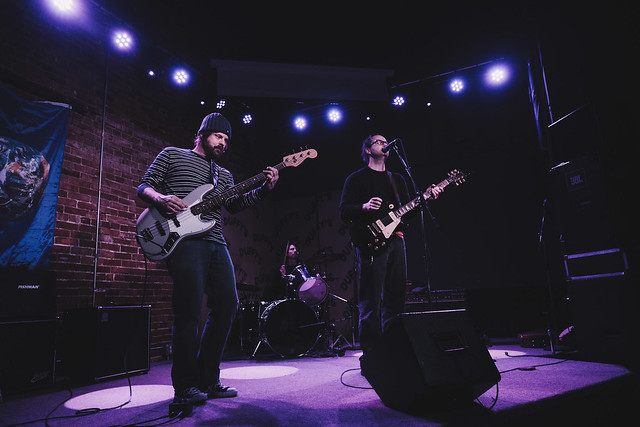 The Renfields | photo by Peter Barnes

But what of 1867 Bar? Less than a year old, it has zero Lincoln Exposed experience and no real established precedent for its sonic profile — in fact, not having one is a stated aim. Since opening, it has hosted pop punk, metal, hip-hop and folk (in addition to featuring local beer).

Perhaps this kind of event could stamp the new venue with a “sound,” but perhaps one isn’t really needed. Maybe I’m a nerd about this, but it is a joy to see bands play in spots in which you’ve never seen them before, especially when the spots are still forming their identity.

So it was also nice to see a good crowd for southern rock band Warbonnet, who opened proceedings at 1867 which also featured folk, post-rock and indie. Later this week, it’ll see Jazzocracy and the Mezcal Brothers. Arguably, the festival’s intrigue lies in its dynamic lineups; looks like 1867 will grant us some. 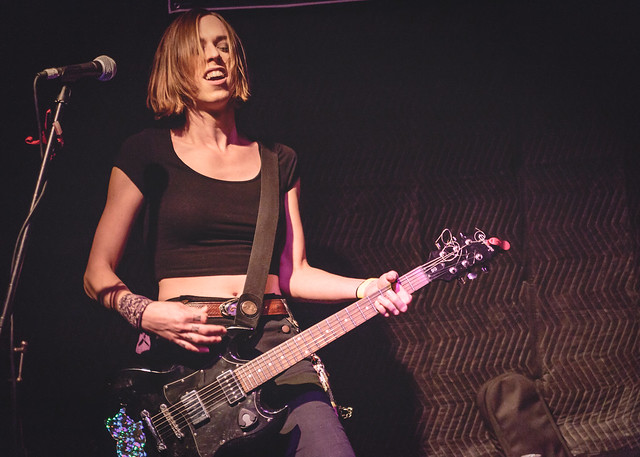 Charting Sonic Changes in Producers of the Word, The Dancing Dead

Lincoln Exposed has often served as a mile-marker for its acts, whether that means unveiling a new sound or new project or new look. They can be changes big or small; I think back relatively recently to when More Machine Now Than Man re-emerged as A Ferocious Jungle Cat, when members of Bud Heavy & the High Lifes debuted emo-rock project Giant’s Arrow and more than a handful of Universe Contest shows.

Last night found Producers of the Word and The Dancing Dead in those roles, at least for my eyes, both having grown into new sounds in some way or another. The former played first, at roughly 9:25 p.m. at The Bourbon. In guitarist Jesse Elsenor’s first show back in awhile, the band seemed tighter and more dynamic than ever while somehow tossing a ton of stimuli into the mix. Credit Jeramie Beahm for much of that, his having whaled on both synth and harmonica in a matter of two songs. John Bewley’s voice added a change of pace and Eric Harris’s solid anchoring kept everyone in-line.

(A quick aside to mention one funny moment: mid-set, Harris missed on a particularly busy drum fill, which no one would have noticed had they not been looking right at his face as he shook his head. After hitting the next, equally difficult one, Harris smiled and mouthed “that’s better.”) 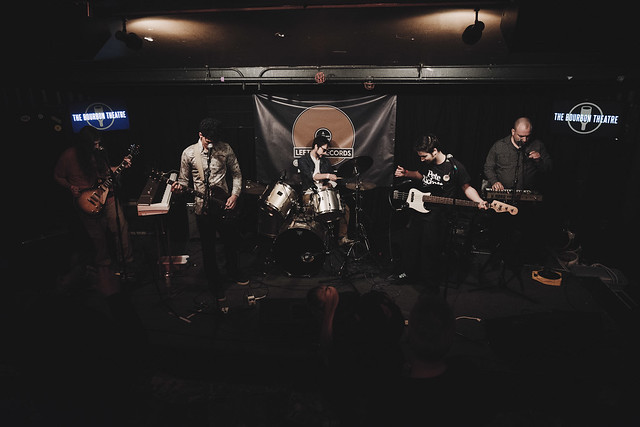 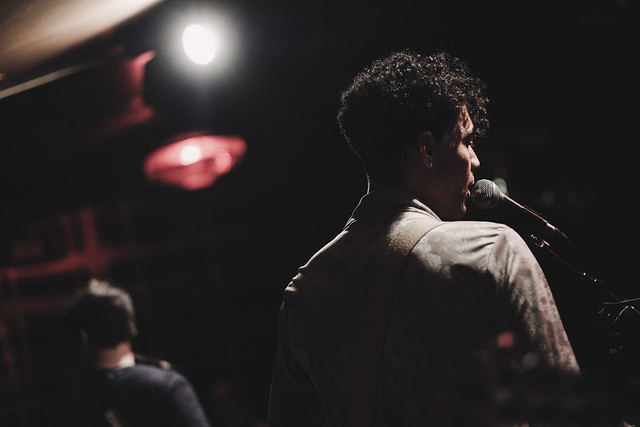 All of this revolved around vocalist/guitarist Chanty Stoval, who seemed to drive the band’s psychedelic engine through tonal dissonance and jungle rhythms. While the instrumentals around him shifted and morphed, he remained the voice in the fray, most strikingly while yelling “The Wall! The Wall!” Unavoidable was the political message therein, with an obvious reference to questionable homeland security measures and their trumpeter’s potential underlying issues. Even with Stoval’s generally smooth vocal delivery, it added an extra edge.

About an hour later, The Dancing Dead hopped onto the 1867 stage. It had been more than a year since I had seen them, time that seemed to have pushed their songs into a cloudier, more far-out head space. The band rocked just as hard, but the acrobatics were more impressive, dreamily shifting into and out of time signatures and sounds.

These will hardly be the only two with moments, sizeable or not, that update their entries into the Lincoln scene. But they were the two that stood out Wednesday. 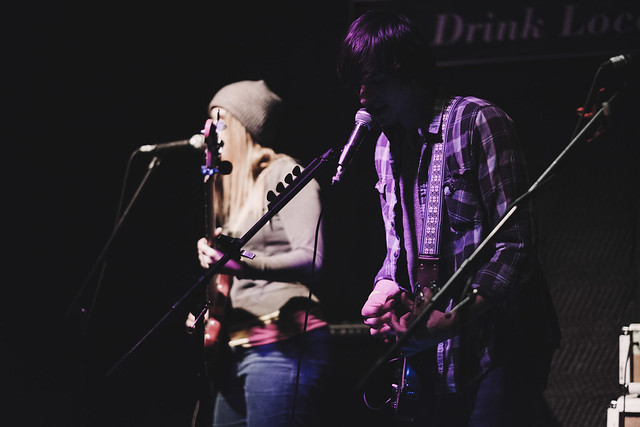 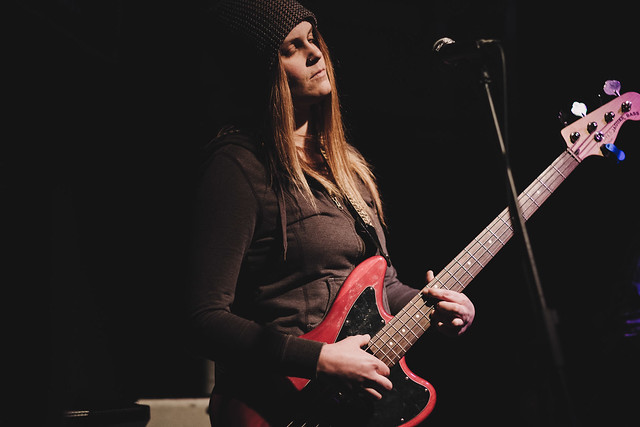 Zoo Bar didn’t only offer folk and blues fare in the festival’s opening act. Props to 15-year-old Jadyn Keller, who made her Lincoln festival debut with a voice like a young Ashanti. She’s the leader in the clubhouse for youngest Lincoln Exposed act (Nebraska Music Academy performs early Friday night)

Christian rapper Phip Phippa DJed for Keller and later took the same stage as the only hip-hop act of the night. Phip’s set was like a polished sermon, complete with meditation and harnessed, performative cadence. 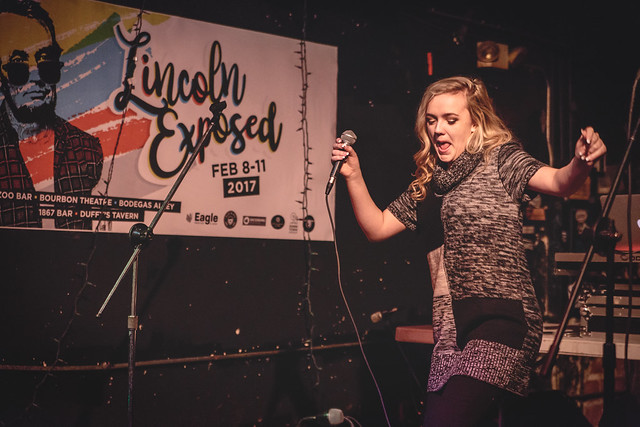 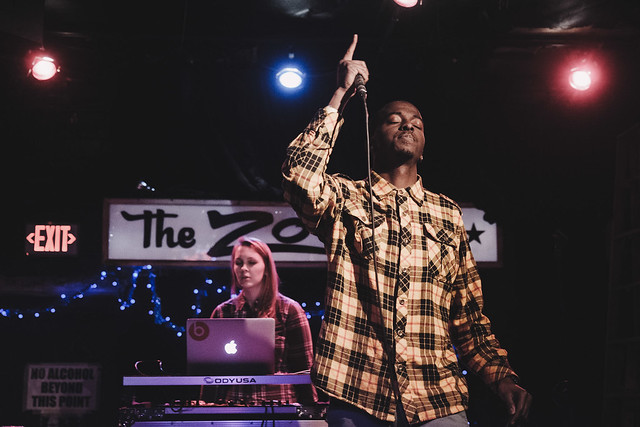 Pure Brown closed down Bodega’s with its complex, video-game-inspired technical rock. The stimulation factor is high, enough to occupy the attention of a young imaginative musician or a hardcore gamer. Sure, there’s the Nintendo aspect which provides immediate draw, but it takes precision and report to play at their tempo and track. 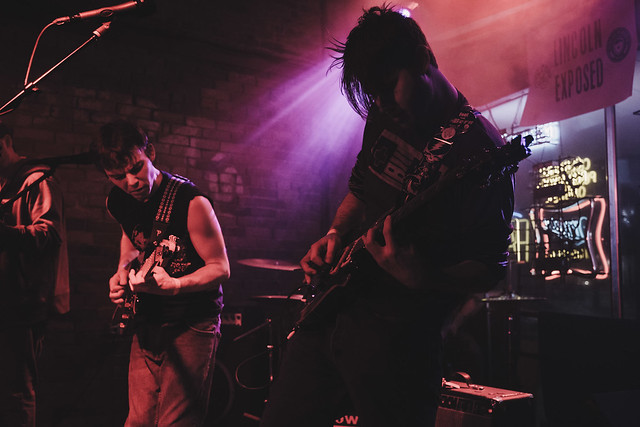 Salt Creek’s Chase Thompson always feels conflicted, in a way. Owing in part to the band’s skill in the somber, it always seems it always seems longing for who it’s leaving or a memory it must release. Last night, Thompson had an added spark, sounding less contemplative and more matter-of-fact, as if the “I” in his songs stood on solid judgment. Juxtaposed next to their pain, it gave the band — all Nebraska music veterans — a more grizzled sound. 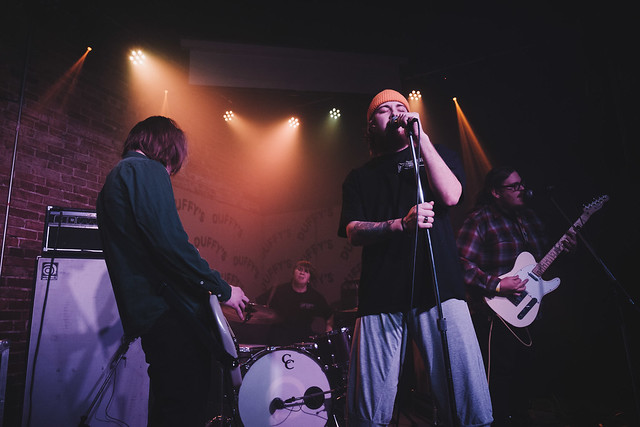 Indie rock band Lulay played a simultaneous closing set. The brand, less than a year old, played with a youthful, whimsical snap. When structure decayed around a Koty Embree or Jake Newbold solo, the band played through it, still very aware of its tonal intention, which was a rock/folk mix. The folkier songs, laden with 7th notes, came from the same minds as the grungy closer. It may still be finding its footing as a unit, but the building blocks are there. 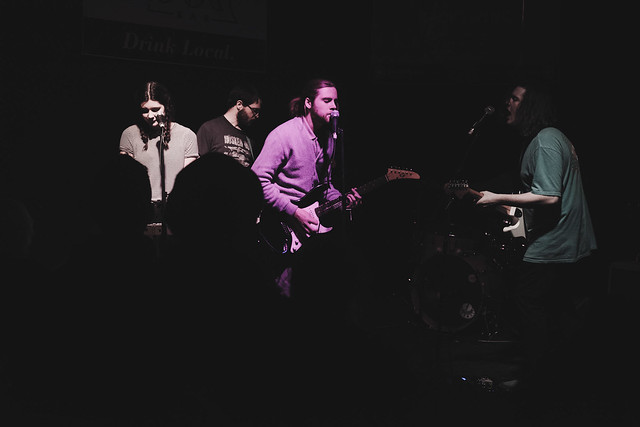 There is always one bone-chillingly cold night during Lincoln Exposed and if the forecast is correct, last night will be the only one. View more photos from Wednesday night below. 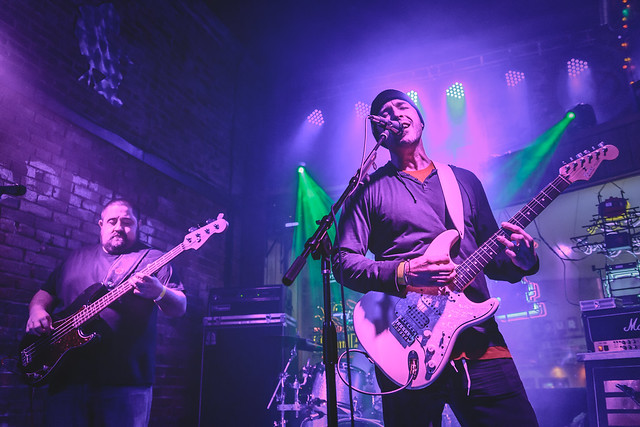 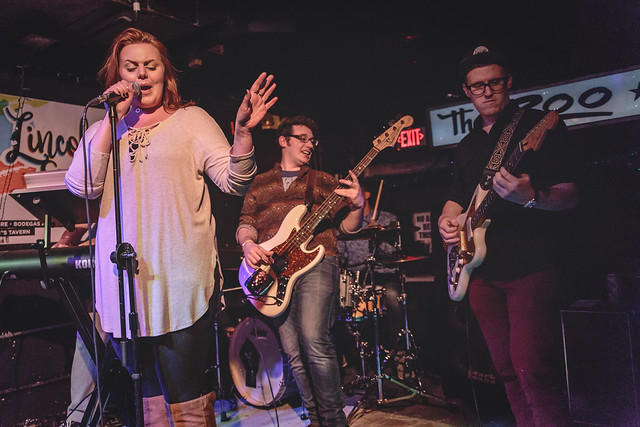 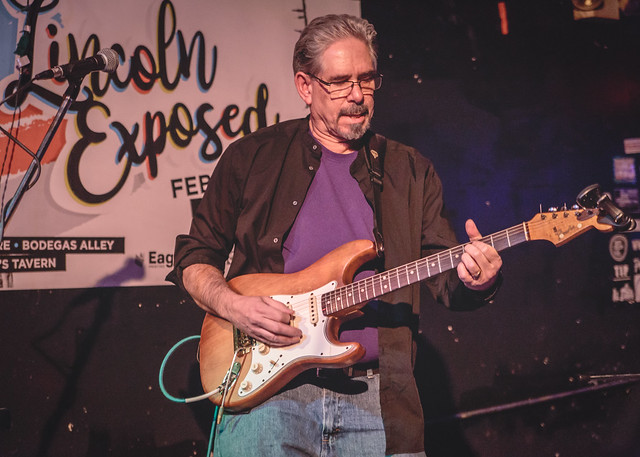 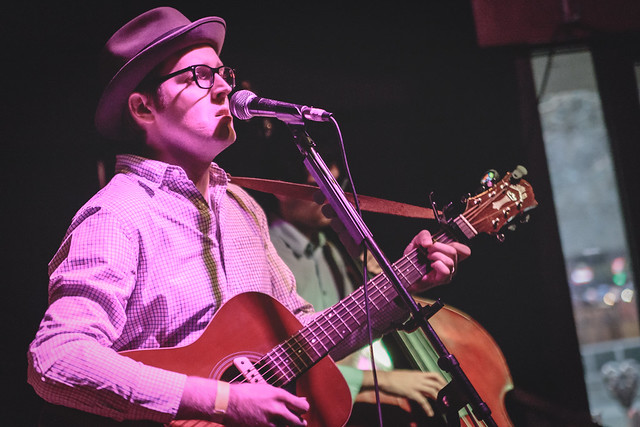 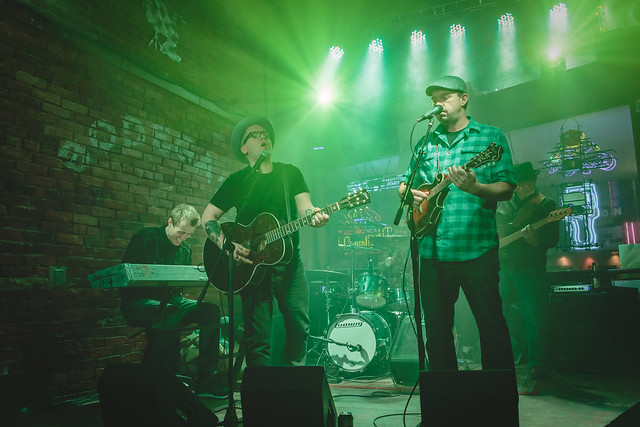 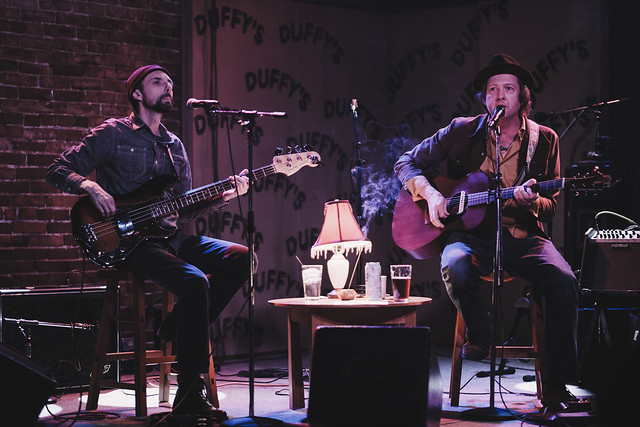 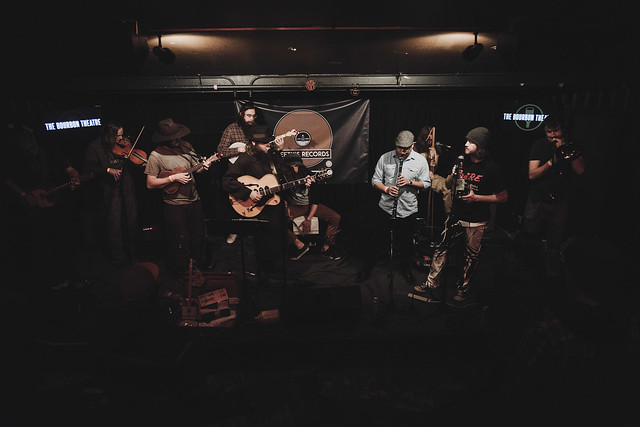 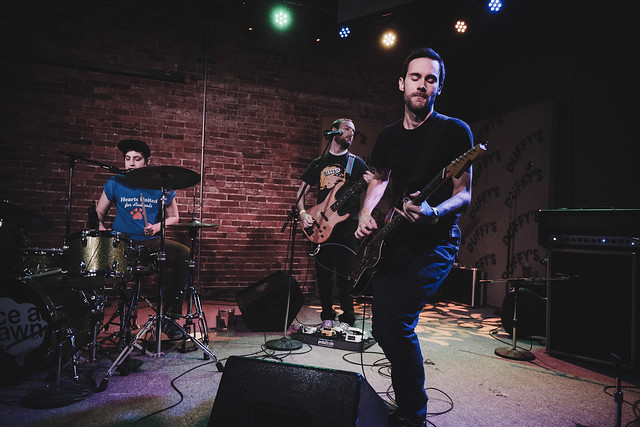 Once A Pawn at Duffy’s Tavern | photo by Peter Barnes 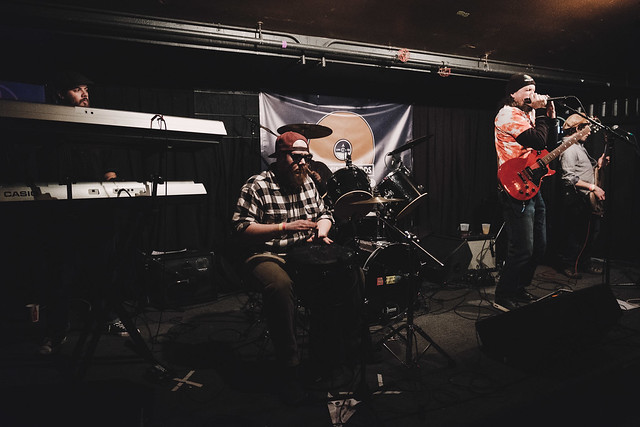 23 Vibrations at The Bourbon | photo by Peter Barnes